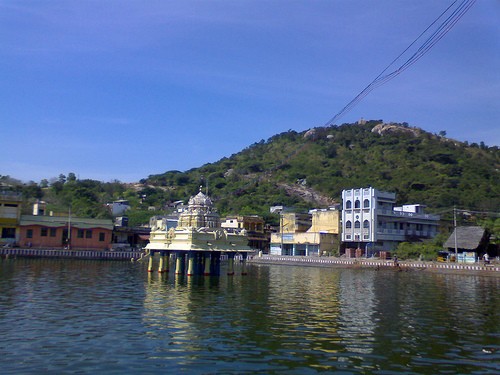 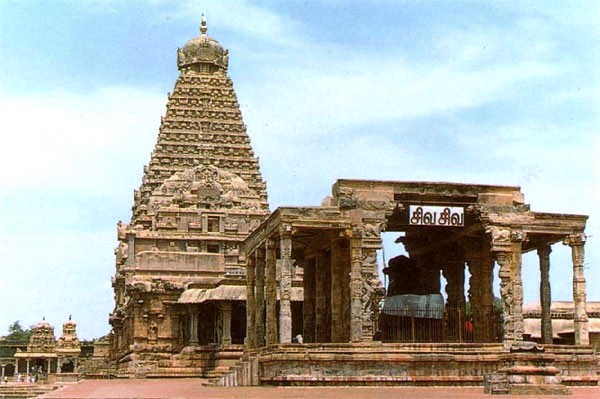 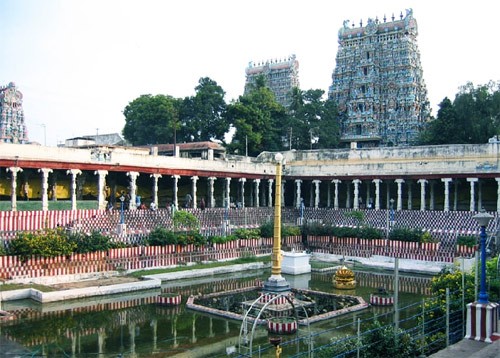 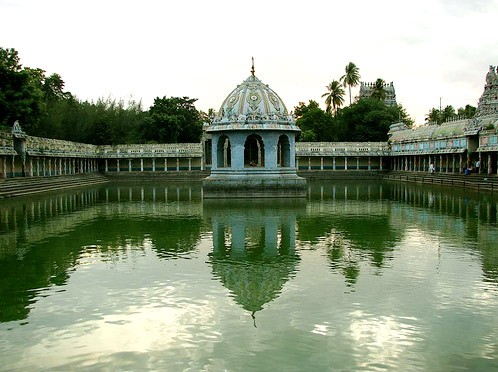 SURIYANAR KOIL TEMPLE-This Temple is Located in East Kumbakonam, Sun Resides here with his consorts Ushadevi  & Chhaya Devi. It is said that Sun God did penance here for Lord Shiva and relieved from Brahma Curse.

THINGALOOR CHANDRANAR TEMPLE- As per legend Chandran(chand) had 27 wives, who are daughters of Daksha Prajapati among all his wife Rohini was her favourite, chandran use to spend most of his time with Rohini ignoring other wives, knowing from their daughters Daksha cursed Chandran that he would gradually fade away, chandran did penace of Lord Shiva here to get relieved from Daksha Curse,to save chandran from the curse Lord Shive decorated him on his head as a crescent moon.

VAITHEESWARAN KOVIL- Angarakan son of Lord Shiva who was born from the drop of Lord Shiva’s, once when Lord Shiva was in deep meditation, a drop of sweat from Lord Siva forehead fell on earth, a male child was born out of this drop, It is said that Lord Shiva cured Angarakan skin disease, following which he joined navgraha club.

One should take a holy dip at Temple Tank Siddsmrita, before entering the temple, which is believed to have healing properties for skin disease.

Special puja will be performed for Kuja Dosha, Mangal Dosha.

TIRUVENKAADU SWETHARANYESWARAR TEMPLE -  Swetharanyeswarar swamy resides here with his consort Bramha Vidyambal. This temple is Famous for Budhan shanthi, taking a holi dip at Chandra thertham which is at the temple entrance and worshipping Lord Shiva will relieve one from Budhan, Wednusday is the best day for Budhan Pooja.

APATSAHAYESVARAR TEMPLE- This Temple is dedicated to Lord Shiva, The Presiding deity Abhathsahyeswarar resides here with his consort Tribuvananayagi. Sage Vishwamitra and King Mushukunda and veerbadra did penance here for Lord Shiva, This is gurusthlam, where guru appears in the form of Dakshinamurthy, he is called as Braspathy as he control education and find arts.

AGNISWARAR TEMPLE-  This Temple is dedicated to Lord Shiva, The Presiding deity Agniswarar residing here with his consort Karpagambal. This Navgraha Stalam is dedicated on sukran (Venus). Agni did Penance here for Lord Shiva, this temple is 18Km from Kumbkonam and worshiping sukran is preferable on Friday.

THIRUNALLAR SANI /  SRI DARBHARANYESWARA TEMPLE -  Lord Shiva is Known as Darbharanyeswara here and Goddess Parvati as Bhogamartha Poonmulai Amman. One will be relieved from Sani Dasha Completelyor to some extent by taking bath at Bramha Teertham and praying for Lord shiva in Wet Cloths. This Temple is Famous for Shani Puja.

Shri Airavatesvara Temple : Airavatesvara Temple is a Hindu temple of Dravidian architecture located in the town of Darasuram, near Kumbakonam, Thanjavur District in the South Indian state of Tamil Nadu. This temple, built by Rajaraja Chola II in the 12th century CE is a UNESCO World Heritage Site, along with the Brihadeeswara Temple at Thanjavur, the Gangaikondacholisvaram Temple at Gangaikonda Cholapuram that are referred to as the Great Living Chola Temples

Mottai Gopura Vasal Athi Kumbeshvarar Temple : Adi Kumbeswarar Temple, Kumbakonam is a Hindu temple dedicated to the deity Shiva, located in the town of Kumbakonam in Thanjavur District Tamil Nadu, India. Shiva is worshiped as Adi Kumbeswarar, and is represented by the lingam. His consort Parvati is depicted as Mangalambigai Amman.

Nageswaran Temple : Nageswaraswamy Temple, Kumbakonam is a Hindu temple dedicated to Shiva located in Kumbakonam in Thanjavur district, Tamil Nadu, India. The presiding deity is revered in the 7th century Tamil Saiva canonical work, the Tevaram, written by Tamil poet saints known as the nayanars and classified as Paadal Petra Sthalam. The temple is counted as the earliest of all Chola temples. Shiva in the guise of Nagaraja, the serpent king.

Divya Desam Arulmigu Sarangapani Swamy Temple : Sarangapani Temple is a Hindu temple dedicated to Vishnu, located in Kumbakonam, Tamil Nadu, India. It is one of the Divya Desams, the 108 temples of Vishnu revered in Nalayira Divya Prabandham by the 12 poet saints, or Alwars. This temple is along Kaveri and is one of the Pancharanga Kshetrams. The temple is believed to be of significant antiquity with contributions at different times from Medieval Cholas, Vijayanagar Empire and Madurai Nayaks.

By Air : Kumbakonam is not well connected to other major cities of the country via regular flights. The nearest airport is in Tiruchirappally at a distance of 77kms.

By Train : You can easily get regular trains to Kumbakonam from other major cities of the country..


visit  kumbakonam  for  the  navgraha  puja