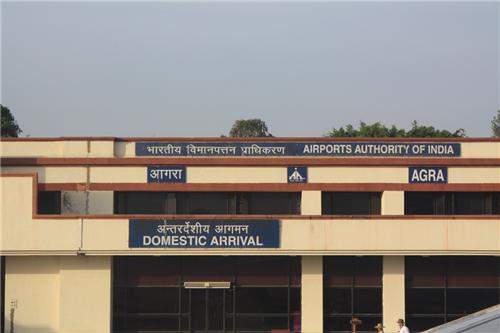 Destination Details
Tour in and around Agra
Hotels in Agra

Pandit Deen Dayal Upadhyaya Airport (Agra Airpot) :  is situated 5 km away from Agra city. Agra Airport is well-equipped with necessary amenities and facilities like spa, shops, food counters, free trolleys to name a few. It is well-connected with prepaid taxis and auto rickshaws.

The Agra Airport is located 5 km away from the city center of Agra, Uttar Pradesh. The Agra Airport is also known as Kheria Airport or Agra Civil Enclave. This airport is a military base and also a passenger/ public airport. The public airport has a passenger holding capacity of 250, including both the arrivals and departures. The air force station was opened during World War II and is one of the largest airbases of the Indian Air Force. It celebrated its sixtieth anniversary on 15 August 2007. The airbase was also featured in the movie ‘Planes’ by Walt Disney Pictures in 2013.

Distance from the Airport

Arrival and Departure both

The Agra Airport is also known as Kheria Airport or Agra Civil Enclave. This airport is a military base and also a passenger/ public airport. The terminal is fairly small, but contains a couple of gift shops selling typical travel items, reading material and souvenirs. A post office, banking facilities and car hire offices round off the modest list of amenities at Kheria Airport. Most visitors use taxis to reach their onward destination, although car rental can be equally convenient if you are happy to self-drive.

Comments: Agra Airport has very limited Flights operating & in near future more airlines will get connected.