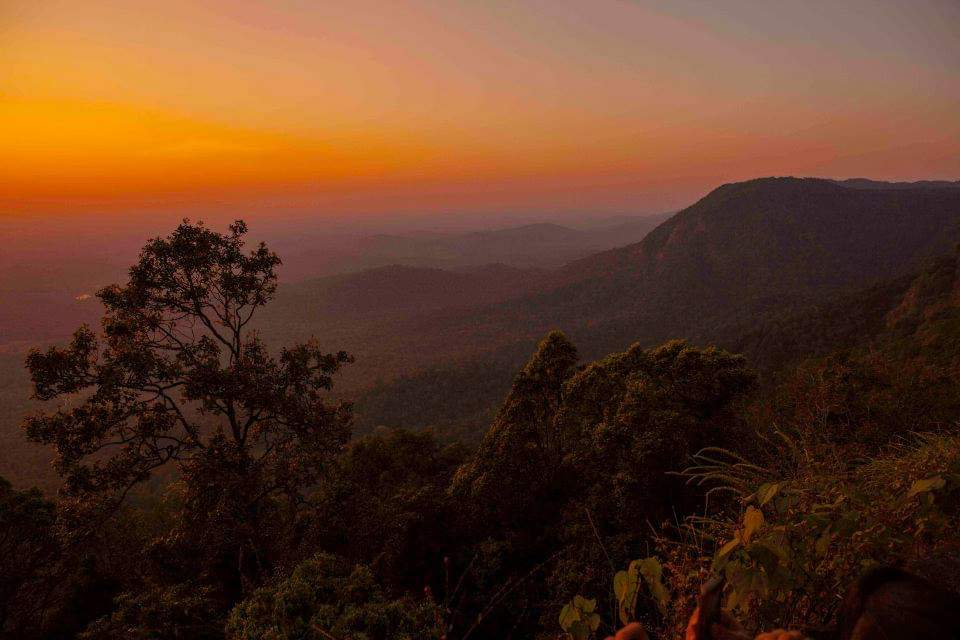 Agumbe is a picturesque little village nestled on a plateau at the top of the Someshwara Ghat. There is an interesting story behind how ‘Agumbe’ got its name. During earlier days Agumbe functioned as a central point that connected this part of the world with ‘Bombay’ (now Mumbai) and served as a launch pad for people who dreamt of colonizing the wild and rich hinterland of the Deccan Plateau. The word ‘Agumbe’ literally means ‘will eat later’, this was precisely what people would say while ascending the 550m Someshwara Ghats with bags on their shoulders and with dreams in their eyes.Agumbe or Aagumbe is located at a height of 826 meters in Shimoga district. Agumbe was the backdrop for the shooting of the film Malgudi Days, based on RK Narayan's novel. Agumbe and its surroundings are filled with thrilling and adventurous trekking routes. Densely forested paths lead from here to a jungle pool known as Emkal Kere, a small hill called Nishani Gudda and the Barkana Falls. Agumbe of Karnataka is also popularly nicknamed the Cherrapunji of South India.Visitors may also drop by a locally popular 14th century temple with Hoysala-style sculptures consecrated to Lord Gopalakrishna. The sunset as seen from Agumbe is a marvelous sight and is a popular draw with most tourists, particularly between the months of November and January. A microwave tower serving as a major landmark of Agumbe, is to be found at this point.

By Air : The Nearest Airport is Mangalore Airport 108 kms

By Road : You can easily get regular buses to Agumbe from other major cities of the country.

View From Agumbe Ghats : Once a bustling, Agumbe has settled into situated the quietude of nature that surrounds it. With an annual rainfall of up to 11,0000 mm it has aptly earned its name as the Cherrapunji of South India. Agumbe (13° 50.87 N 75° 09. 59’ E) is 643 meters above sea level along the crest of the Western Ghats. The Western Ghats or Sahyadri as it is also known, is identified as one of the world’s Biodiversity Hotspots, which means the biodiversity of these forests comprises a high percentage of endemism with many taxa highly threatened. The Agumbe Rainforest Complex (ARC), in the middle of which ARRS is located, comprises of forests of the Someshwara Wildlife Sanctuary (WLS) and the Kudremukh National Park (NP), while the entire contiguous Mookambika WLS and Sharavathi Valley WLS is a part of the Kodachadari Hill Range. These two mountain ranges along with a large tract of Reserve Forests around Kundapur, Shankaranarayana, Hosanagara, Sringeri and Thirthahalli are referred to as the 'Agumbe Rainforest Complex', one of the largest contiguous forest stretches left in India.

The Village and Surroundings : Agumbe Village is spread out across 3 square kilometres with a population of less than 500 people who largely depend on their areca plantations and forest produce to eke out  their living. Agumbe is also famed as the location for filming one of India’s most popular television serials, ‘Malgudi Days’ based on the book by R.K.Narayan. The ‘Doddamane’ (Big House) where the series was filmed still maintains its beauty and hosts visitors every day. ‘Doddamane’,  is over 110 years old and the family there still maintains all the traditional rituals and cuisines, a real living legend. Apart from a huge range of mammals, birds and insects living in the luxuriant rainforest, Agumbe is also home to the world’s longest venomous snake and a flagship species, the iconic king cobra. Since 2005 Agumbe has also been the proud host to the Agumbe Rainforest Research Station which has pioneered the study of king cobras in the wild.