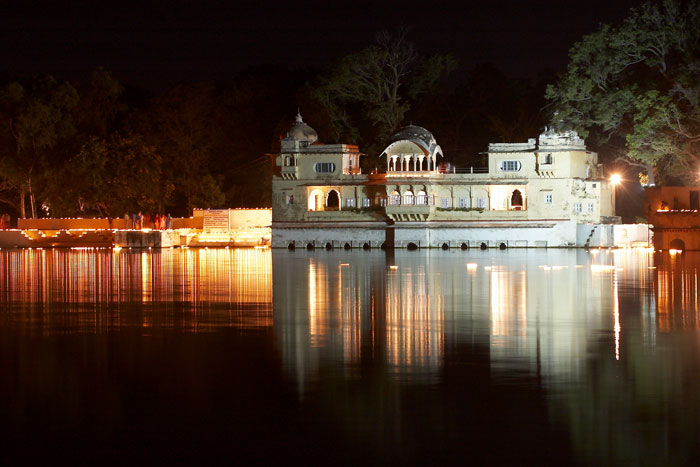 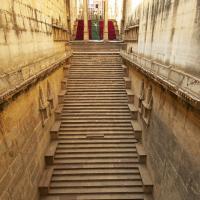 It is popularly believed that Nobel laureate Rudyard Kipling penned part of his famous novel ‘Kim’ in Bundi. In fact, so impressed was he by the place, that this is what he wrote about the Bundi palace:

‘Jaipur Palace may be called the Versailles of India … Jodhpur’s House of strife, gray towers on red rock, is the work of giants, but the Palace of Bundi, even in broad daylight, is such a palace as men build for themselves in uneasy dreams – the work of goblins rather than of men.’

Bundi is a magnificent town located around 36 kilometres from Kota. Dotted with palaces and forts, the place has a fairy tale quality about it. Bundi’s charm lies in its location –surrounded by orchards of orange, guava, pomegranate and mango trees, flanked by the Aravalli range and rivers and lined by fields of cotton, barley and wheat. Situated far from the crowds, it is the simple rural folk that lend Bundi its allure.

Bundi was once ruled by the Hada Chauhans. Many historians claim that it was once the capital of the great Hadoti Kingdom, which was renowned for its art and sculpture. However, in 1624, Kota separated and became an independent state and this marked the beginning of the downfall of Bundi. Whether that may be, Bundi still retains its charismatic medieval grandeur. And just like Jodhpur and Rajput, the architecture of Bundi also possesses a noticeable bluish hue, designed to keep houses cool during hot summer, in the intricately carved brackets and pillars.

By Air : The nearest airport is Sanganer Airport in Jaipur which is about 206 kms away.

By Rail : The railway station is located about 4 kilometres south of the old city. There are railway connections between Bundi and Chittorgarh.

Sukh Mahal : Sukh Mahal, a small, two-storied palace was a summer retreat of past rulers. Today, it is quite famous for being the place where Kipling wrote ‘Kim’. Many credit the palace as a having played muse to the renowned novel. In fact, part of a movie based on the novel was even shot here.

Kshar Bag : Located near the Chhatra Vilas Garden, Kshar Bag, sometimes known as Saar Bagh, houses the memorial cenotaphs of the royal family of the Bundi state. It is located on the Shikar Burgh Jait Sagar Road.

Raniji ki Baori : Raniji ki Baori, also known as 'Queen's Stepwell', is a famous stepwell built in 1699 by Rani Nathavati Ji, the younger queen of the ruling king Rao Raja Anirudh Singh of Bundi. This multi-storied stepwell displays excellent carvings of Gajraj with his trunk turned inwards, giving the impression of having drunk from the baori on its pillars. Its high arched gate gives it an inviting appearance.

Dabhai Kund : Shaped like an inverted pyramid, the Dabhai Kund, also known as Jail Kund, is the largest of its kind in Bundi. The fantastic carvings on the steps that lead to the water alone are reason enough to warrant a visit.

Nagar Sagar Kund : Located outside the Chauhan Gate, the Nagar Sagar Kund, a set of twin step wells, was constructed to provide water during times of famine.

Taragarh Fort : Built in 1345, Taragarh is one of the most impressive structures in Bundi. While it may be a bit ramshackle and strewn with overgrown vegetation, the palace grounds are a great place for a leisurely stroll. With its curved roofs topping pavilions, excess of temple columns and elephant and lotus motifs, the palace is a tribute to Rajput style.

Lake Jait Sagar : Located close to the Taragarh Fort, this picturesque lake is surrounded by hills and covered with pretty lotus flowers that bloom during winter and monsoon.

Lake Nawal Sagar : Nawal Sagar Lake is an artificial lake that is a major tourist attraction and can even be seen from the Taragarh Fort. There is a half-submerged temple dedicated to Lord Varun Dev in its centre. What makes the lake unique is that one can see the reflection of nearby palaces and forts in its waters.

Lake Kanak Sagar : About 67 kilometres from the town of Bundi lies this wonderful flat lake. There is also a town named after the lake. One can spot several migratory birds here such as bar headed goose and Demoille cranes all through the year.

Ramgarh Vishdhari Sanctuary : Ramgarh Vishdhari Wildlife Sanctuary is located 45 kilometres from Bundi on the Bundi-Nainwa road. Covering an area of 252 sq. km., this sanctuary is home to a variety of flora and fauna. Established in 1982, it forms a buffer for Ranthambore National Park. The best time to visit is between September and May.

Phool Sagar : A personal property of the descendants of the royal family, this artificial lake gets its name from the palace on its banks. This palace houses an exclusive collection of paintings created by Italian prisoners. Beautiful gardens surround it and the lake. Make sure you obtain special permissions required to explore the palace and its grounds.