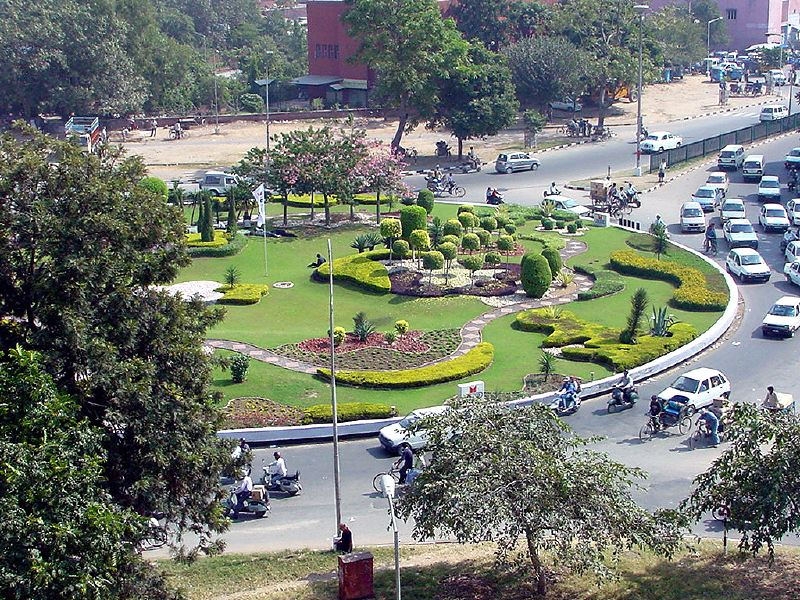 Destination Details
Tour in and around Chandigarh
Hotels in Chandigarh

Chandigarh, derives its name from a temple Chandi Mandir in the vicinity of the site selected for the city (deity Chandi, goddess of power), and a fort or ‘garh" beyond the temple, called Chandigarh..

Chandigarh was conceived as the capital of Punjab, in lieu of the lost capital at Lahore. But Punjab was divided a second time in 1966, and Chandigarh is today the capital of the States of both Punjab and Haryana. However, the city does not belong to either. Chandigarh is a Union Territory, administered by the Government of India.

Chandigarh belongs to its people. They love the city, and are proud of the quality of life it continues to provide.

Chandigarh has become synonymous with a certain kind architecture, alongwith planned landscaping, not found in other cities of India, and not amenable to being strait jacketed. And so we begin the story of Chandigarh.

Initially the Government of Punjab approached American town planner Albert Mayer who along with architect Matthew Nowicki became the key planners for the new city. The master plan conceived by them had a fan-shaped outline filling the site between the two seasonal river-beds. At the northern edge of the city was the capitol complex against the panoramic backdrop of the Shivalik hills. The City Centre was sited in the middle, and two linear parklands ran from the northeast to the southwest. Mayer sought to create self-sufficient city, restricted in size and surrounded by green belts. Areas were clearly demarcated for business, industry and cultural activities. In August 1950, his co-planner Nowicki died in a plane crash and Mayer withdrew from the project.

This vision of Chandigarh, contained in the innumerable conceptual maps on the drawing board together with notes and sketches had to be translated into brick and mortar. Le Corbusier, eminent architect and urban theorist, was selected to carry forward this task. He retained many of the seminal ideas of Mayer and Nowicki, like the basic framework of the master plan and its components: the Capitol, City Centre, besides the University, Industrial area, and linear parkland. Even the neighbourhood unit was retained as the basic module of planning. However, the curving outline of Mayer and Nowicki was reorganised into a mesh of rectangles, and the buildings were characterised by an ‘honesty of materials’. Exposed brick and boulder stone masonry in its rough form produced unfinished concrete surfaces, in geometrical structures. This became the architecture form characteristic of Chandigarh, set amidst landscaped gardens and parks.

By Road : The Union Territory of Chandigarh is well served by an excellent network of roads. National Highways 21 and 22 are the chief road arteries linking Chandigarh with the rest of the country. In good weather it is a pleasure to drive into Chandigarh along these roads. The city is within motorable distance from a number of popular towns and pilgrimage centres.

By Bus : Buses of several State Road Transport Corporations connect Chandigarh with many cities and towns of neighbouring states. Buses may be luxurious-air-conditioned, deluxe, semi-deluxe or ordinary coaches. The Inter-State Bus Terminus (ISBT) is located in Sector 17(City Centre). Other services at the ISBT include a post office, tourist offices, a rail reservation centre, a 24-hour cloakroom and several eateries. CITCO’s self-service restaurant ‘The Chef’ provides snacks and light meals from 7.00 a.m to 10.00 p.m.

By Train : Chandigarh Railway Station is about 8 kms from the City Centre in Sector 17. The Shatabdi Express and the Himalayan Queen provide two train connections every day between Chandigarh and Delhi. Chandigarh Transport Undertaking buses ply to and from the railway station to coincide with the arrival and departure of both trains.

Architecture : For all visitors, some buildings are on the "must-see" list. We will walk you through the most distinctive among these.

The Capitol Complex  : The Capitol Complex in Sector 1 is the seat of government. It is also the raison d’etre for this city. Today it is the joint headquarters of Punjab and Haryana. The offices of the Union Territory Secretariat are located in Sector 9. Sector 1 was conceived and developed entirely by Le Corbusier. We are told that the three geometrical concrete buildings in the Capitol Complex – the Legislative Assembly, the High Court, and the Secretariat – do not resemble anything that existed before.

The Legislative Assembly (Vidhan Sabha) : The Legislative Assembly at the south-eastern end of the Capitol piazza is the most arresting of them all. It stands facing the High Court, with an imposing portico that has a cubist mural painted by Le Corbusier himself. The three features emerging from the roof: a powerful cupola housing the main assembly chamber; a pyramidal tower meant for the ‘upper house’ and housing the Haryana Legislature; and a simple cuboid tower providing access to the roof, combine to break the silhouette of the building and lend a certain grace to the structure.

The High Court : The High Court was one of the first architectural monuments to be built in the Capitol Complex. Its extraordinary parasol-like roof floating over the building with a magnificent outward sweep, conveys symbolically that the law is an "umbrella of shelter" for the ordinary citizen. The awesome entrance for the judges through a high portico resting on three giant pylons is intended to manifest the Majesty of the Law to all who enter.

The Secretariat : The Secretariat is the largest of these edifices in the Capitol Complex. It is a huge multi-storeyed linear slab-like structure, intended as a work place for 4000 people. The long line of identical sun breakers is broken by introducing varied heights and projections, together with a roof containing towers, funnels, pavilions and a cafetaria jutting out like an art object placed on a pedestal. In the hands of Corbusier, this basically dull framework has turned out to be something of a sculpture. These three buildings create an extraordinary composition. In particular, their ‘raw’ finish and rough concrete surfaces which Le Corbusier insisted upon was first critiqued vehemently, and then admired the world over. The fourth building in the composition was envisaged as the Governor’s Palace or a Museum of Knowledge. This is yet to be realised.

In the world of architecture, these buildings are perceived as exceptional manifestations of ‘modern’ architecture, reflecting the creativity and care of a lifetime.To further enhance the linear perspective in the Capitol Complex, Le Corbusier planned several monuments along its main piazza extending 1200 feet. These are the monument of the Open hand, the Martyrs Memorial, the Tower of Shadows and the Geometrical Hill. We will dwell upon the Open Hand.

The Open Hand  : This giant hand in metal sheet rises 26 meters from a sunken french and rotates freely in the wind from a high concrete pedestal, conveying the symbolic message "Open to give, open to receive". Conspicuous by its scale, the Open Hand is the official emblem of the city. The design of this emblem as of the monument was conceived entirely by Le Corbusier. There is probably no city emblem in the world quite like this one. ‘Open to give and open to receive’ presumes an open mind. This notion as also the emblem, celebrates the give and take of ideas, as opposed to commemorating personalities.

Panjab University : The basic layout and many of the buildings in the Panjab University were designed by Pierre Jeanneret and represent some of his finest works, notably the Gandhi Bhavan, the Fine Arts Museum, and the Students Centre. The Gandhi Bhavan is poised atop a large reflecting pool. The architectural grandeur of this building is accentuated by its reflection in the water. The Fine Arts Museum is a modest single storey structure faced with red sand stone, and laid out around a central courtyard. The Students Centre is a unique cylindrical structure with a ramp spiralling up to the cafeteria on the top floor. The Post Graduate Institute of Medical Education and Research, the Colleges of Architecture and Engineering (Sector 12), and those of Boys and Girls Hostels (Sector 11) are very near the Panjab University (S