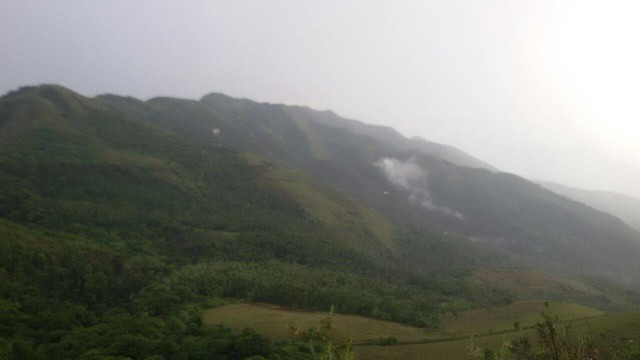 Chikmagalur has played host to an event, thanks to which, countless Indians wake up to brighter mornings. Centuries ago, when the Sufi mystic Baba Budan smuggled seven coffee beans from Yemen into India, he probably didn't bargain for millions of coffee junkies unwittingly blessing his soul everyday, with every sip of their coffee. Chikmagalur, whose hills nurtured the coffee culture at its bosom, is a green slice of heaven on a permanent coffee high.Rambling hills, pristine pools, fascinating nooks and crannies with a shrine, intriguing caves, lush mists and dreamy woods make the geography of Chikmagalur. The journey to the highest peak in Karnataka is so engaging that you forget to be scared - when there is reason to be afraid, very afraid. The roads are tricky, yes, but getting to the top is worth the while. Just like the 10 km trek to the gorgeous Habe Falls is - its almost impossible by vehicle and is inaccessible in the monsoons. Despite all that coffee, Chikmagalur is far from a gracious host. You need to work hard to win her affections. Well, its not for nothing Chikmagalur was a princess dowry. When King Rugmagada Raya's younger daughter was given away in marriage, she brought with her a pretty portion of the Western Ghats as her dowry, thus giving the place its name - Chikka-magal-uru or Younger Daughter's Village. Long treks, safaris and breathing plenty of fresh, coffee-scented air - Chikmagalur makes you feel so good that you want to throw your arms around the world.

Kudremukh : The Kudremukh (Horse Face) range gets its name from the unique shape of its peak. The broad hills 95km south-west of Chikmagalur town overlook the Arabian Sea and are chained to one another by deep valleys and steep precipices. As yet 'undiscovered' by tourists, Kudremukh is a trekker's paradise. Let the wonderland of lush green forests interspersed with rivers, grassy slopes, captivating cascades, rare orchids, caves, ruins and traces of old civilisations amaze you as you trek your way through it. The best time to visit is after the monsoon when everything is lush green and the rivers, streams and waterfalls are at their best. Ganga Moola is a scenic place located in the Bhagawathi forest where the three rivers Tunga, Bhadra and Netravati originate. A shrine to Goddess Bhagavathi and a 1.8m high Varaha image inside a cave are the chief attractions here.