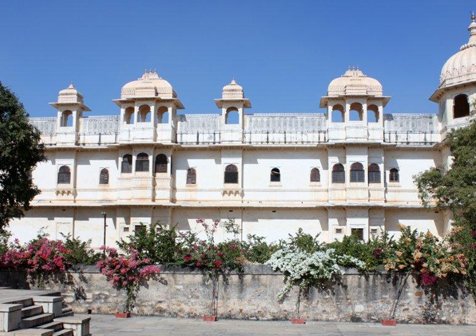 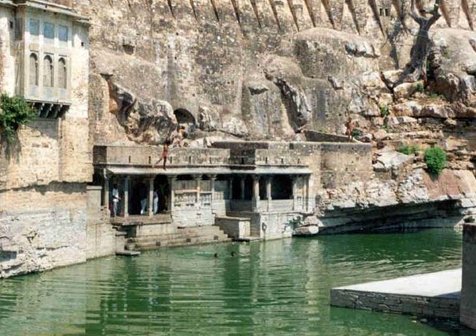 Chittorgarh About this soundpronunciation (help·info) (also Chittor or Chittaurgarh) is a major city in Rajasthan state of western India. It lies on the Berach River, a tributary of the Banas, and is the administrative headquarters of Chittorgarh District. It was capital of Rajput State of Medapata (Modern Mewar) during 8th to 16th Century. The city of Chittorgarh is located on the banks of river Gambhiri and Berach.

Chittorgarh is home to the Chittor Fort, the largest fort in India and Asia. It was sacked thrice In 1303 by Alauddin Khalji, again in 1535 by Bahadur Shah of Gujarat, and lastly by the Mughal king Akbar in 1568. Its Hindu Rajput rulers fought fiercely to maintain their independence. On all three occasions when faced with a certain defeat, the men fought to death while the women committed suicide by jauhar (mass self-immolation). Chittor also has been a land of worship for Meera, It is also known for Panna Dai

By Air : The nearest airport is Udaipur (Dabok Airport). The airport is located 70 kilometers from Chittorgarh

By Rail : Chittaurgarh Junction is a busy junction of Western Railway of Indian Railways

By Road : Chittorgarh is well connected to all parts of India by roads.

Chittorgarh Fort : A Chittor Fort seated on a 180-metre hill, covers an expanse of 700 acres (2.8 km2). It was constructed by the Mauryans in the 7th century AD. There is also a belief that it was constructed by Bhima of the Pancha Pandavas. This fort was the citadel of many great Indian warriors such as Gora, Badal, Rana Kumbha, Maharana Pratap, Jaimal, Patta, etc.

Kalika Mata Temple : Kalika Mata Temple was originally built in the 8th century for Sun God and was later converted to a temple for mother Goddess, Kali in the 14th century. During the festival days of Navaratri, fairs are organised and pilgrims from different places come here to pay obeisance at the temple.

Vijay Stambha : Vijay Stambha, is a huge nine storey tower which was built by Maharana Kumbha to commemorate his victory over the rulers of Malwa and Gujarat in 1440. The tower is 122 ft (37 m) high and stands on a 10 ft (3.0 m) high base. There are sculptures and carvings on the exterior walls of the tower. The tower is visible from any section of the town below. And for reaching tower top one have to climb 157 steps, one can take great view of the surroundings. The inside walls of the tower are carved with images of Gods, weapons, etc.

Kirti Stambha : Kirti Stambh (Tower of Fame) is a 22-metre-high (72 ft) tower built in the 12th century AD. Kirti Stambh is built inside Chittorgarh fort. It is dedicated to Rishabha, the first Tirthankara of Jainism. It was built by a merchant and is decorated with figures from the Jain pantheon. It is a seven storied pillar which was built by Biherwal Mahajan Sanaya of Digambar Jain sect. On its four corners are engraved idols of Shri Adinathji in Digambar style which each are five feet (about 1.5 meters) high and elsewhere are engraved several small idols consecrated to Jain lineage of deities.

Rana Kumbha's Palace : Rana Kumbha's Palace is near the Vijay Stambh. This is the birthplace of Maharana Udai Singh, the founder of Udaipur. His life was saved by the heroic act of the maid Panna Dhay, who replaced her son in place of the prince, with the result that her son was killed by Banbir. She carried the prince away to safety in a fruit basket. Rani Meera Bai also lived in this palace. This is the place where Rani Padmini committed jauhar with the other ladies in one of the underground cellars.

Rani Padmini's palace : According to legend, Rani Padmini's Palace is from which the Delhi Sultanate ruler Alauddin Khalji was allowed to watch a reflection of the Rani by replacing the mirror at such an angle that even if he turned back he could not see the room. Khalji had been warned by the Rani's husband Rawal Ratan Singh that if he turned back they would cut his neck.[20]