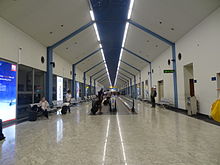 Destination Details
Tour in and around Colombo
Hotels in Colombo

Colombo Airport is the hub of SriLankan Airlines (One World alliance), Mihin Lanka, Cinnamon Air and Millennium Airlines. The airport is one of the busiest hub airports in South Asia and operates direct flights to Asian, European, USA, Oceania and Middle East destinations.

More than 35 airlines operate to/from Colombo airport being SriLankan Airlines the busiest one. Some airlines have seasonal flights, both passenger and cargo.

Terminal : Colombo Bandaranaike International Airport (CMB), has two terminals: the international terminal (T1) and the domestic terminal (T3) and one cargo terminal. Terminal 2 is under construction, it’s planned to be finished in 2020.

- Terminal 1: It has 12 gates and handles international flights. Arrival and departure areas are separated horizontally.

- Terminal 2: It is planned to be opened in 2020 and is going to handle international flights. It will have 8 gates.

Arrivals and Departures levels of the terminals offer different services and facilities to all passengers as Duty-Free shops, Lounges, Shops, Restaurants, Cafeterias, Telecommunication facilities, hotel, among others.

By Bus : There are direct express buses from the airport to Colombo central bus stand in 25 minutes. From there you can reach any part of the country.

By Shuttle : Shuttle bus services or private transportation Is one of the best options but you will have to book it in advance.

By Train : There is rail line linking the airport to Colombo called "Colombo Airport Express Rail" and operates as a shuttle.The station is not at the terminal itself (aprox. 1 km) and is difficult to locate it. The best option is to take Tuk-tuk to reach the station.

By Taxi : The Airport Taxi Service operates with a fleet of over 600 vehicles.

The airport is currently being expanded to be able to serve up to 15 million passengers. The project is called "Phase II Stage 2" and is being funded by Japanese Government.

New Terminal : A two tier passenger terminal with arrivals and departures physically separated as found in most modern airports will also be constructed.

New Runway : The government has decided to invest on a second runway at the airport, enabling the A380 to land in Colombo, but the calendar to do that has not been announced yet.