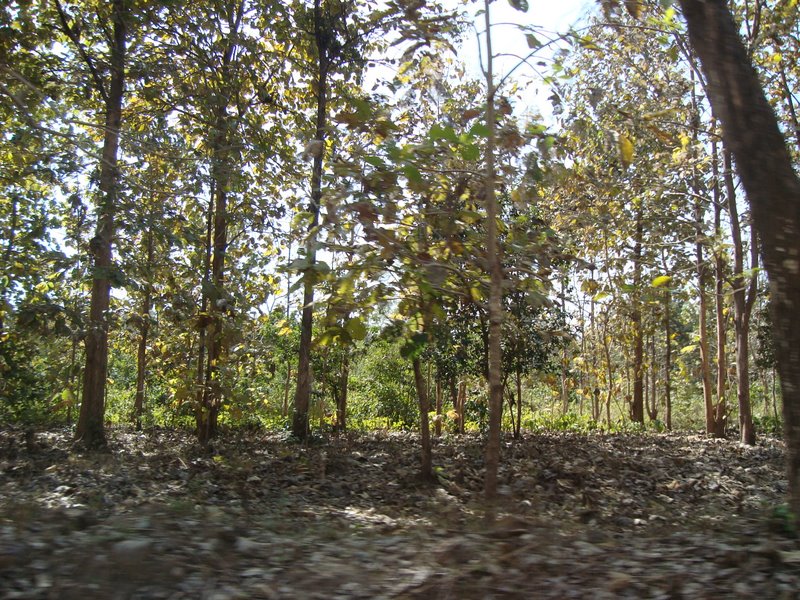 Corbett National Park, established in 1936 with the name Hailey National Park and renamed as Ramganga National Park in 1952, got its present name in 1957 after Jim Corbett, the famous naturalist and photographer. This is India's first national park and beyond doubt the most attractive Park in India. The Park is placed in the foothills of the Himalayas, in the midst of lush greenery and uneven mountains with varying heights, ranging from about 1300 feet to nearly 4000 feet. It is believed that the place, mostly lying on the banks of Ramaganga River, has prospered an ancient civilization.

The main attraction of tourists and wild life enthusiasts to this Park is that the majestic view of Tiger with all its wildness in this Park. This park is a natural habitat of the rare species of Tigers that are facing extinction. It is a place draws huge tourist inflow and offers excellent sightseeing. The headquarters of Project Tiger, Ramnagar is a good place to stay.

Corbett National Park is famous for its wealthy flora and fauna. Also the wild animals, reptiles and bird with many varieties of species enrich the Park and it is haven for bird watchers, wild life enthusiasts, environmentalists and nature lovers. Very rich in vegetation, if we take statistics there are about more than 51 different kinds of shrubs, more than 30 kinds of bamboos and over 110 different species of trees, apart from the greenish grass seen only in meadows.

The Park, renowned for the majestic leopards and elephants, caters for the life of many rare species of mammals, birds and reptiles, more than 25 species of reptiles, 585 kinds of birds and over 50 varieties of mammal species. If one is interested he can indulge lively with deers, spotted in Corbett National Park, barking deer, spotted dear, sambar, chinkara are some of the different kinds of species seen in the Park.

Another major attraction here is the aquatic reptiles; different kinds of crocodiles can be spotted here. Corbett National Park is really a worth natural park to visit, to see the nature's varieties and beauty. This is a park first among equals.

By Air : The Nearest Airport is Delhi/ Dehrafun.. At 295 Km from Corbett National Park, the nearest International Airport is at Delhi. The major air link for tourists coming from northern parts of India is at Dehradun and Lucknow. Preferably, passengers availing flight from within India, or other parts of the world, should land down either to Palam Airport (domestic) or to Indira Gandhi International Airport (International), New Delhi, accordingly. Both the airports have well facilitated air links within as well as outside India.

By Rail : The closest railway station to Corbett National Park is Ramnagar, which is 12 km from the Park. Ramnagar is the terminus of Delhi-Moradabad-Ramnagar broad gauge branch of North East Railway.

Corbett Museum : Located at Kaladhungi, Corbett Museum is in a heritage bungalow of Jim Corbett, the renowned environmentalist, hunter as well as a front runner in the tiger conservation. This magnificent museum brings to the forefront of memory the life and activities of the spectacular and distinguished personality. Corbett National Park visits gets its full value only with the museum visit.

Corbett Waterfall  : The Corbett Waterfalls, a small but awesome view, is from a height of about 60 feet and is in the backdrop of scenic greenish forest. Full Moon light colored waterfall is really worth-while to observe. The area is admired as a camping site with a vast diversity of plants and birds. The wide area around the water falls provides very good parking and camping facilities. It is a very nice picnic spot. A near by attraction is ‘Nature Walk' museum, where one can experience the pure nature in its primitive style and calm.

Jungle Safari : As a tourist, if you like to move with some wild animals or to have some special view of herds of elephants or different species of deers, Corbett National Park offers you with the facilities of Jungle Safari. One can look for nature safari, to have bird watching and enjoying the precious nature. You can also have Jeep safari through the jungles of Corbett and if lucky enough can even spot some tigers. If adventurous further or to have some memorable moments, can take up an Elephant safari, really amazing experience. Resorts in Corbett arrange the required facilities. Visitor season: Dhikala Zone (15th Nov to 15th June), Bijrani Zone, Sonanadi Zone &Domundo Zone (15th Oct to 30th June), Jhirna Zone (Round the year).