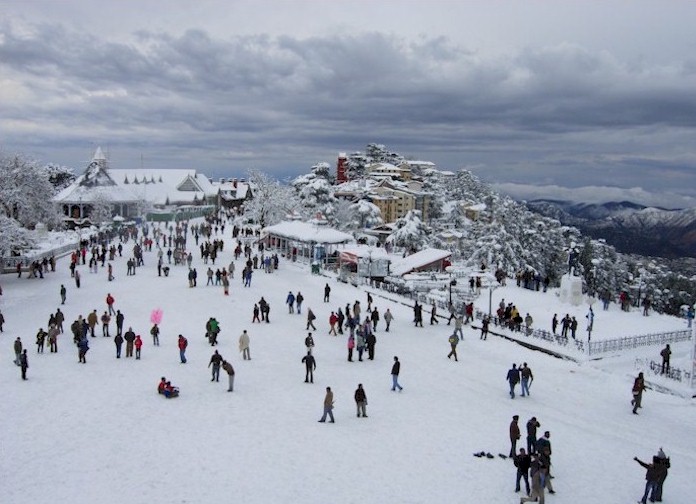 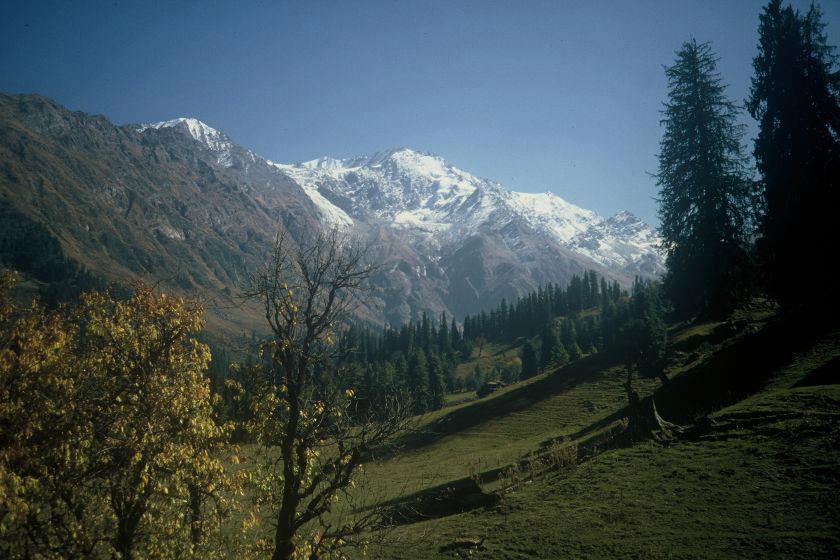 At the foot of the main spurs of the Dhaula Dhar whose dark, pine covered, mountain-side reaches towards the upper peaks that  soar  into the region of eternal show is a  scenic  British built hill station' where a young and prematurely ageing  British peer sought peace, tranquility and respite from the wars he was embroiled in. This is Dalhousie, gateway to Chamba, the "vale of milk and honey'', sparkling and impetuous streams. The  north western Himalayas, comprising Himachal Pradesh  and the Kangra  district  of the Punjab,  are  a  kiker's  paradise, surrounded, as he is, by lovely valleys and towering mounting  in their  wildest and most magnificent aspects, From  the  beautiful valley of Kangra, one rises to steeply rising mountain, where the great rock wall of Daular Dhar towers above the towns in the foot hills. In the rough country-side, as contrasted with luxuriant Kullu

and Kangra valleys, a narrow winding road, an off shoot  of the main road to Pathankot, leads to the lovely  scenic hill resort of Dalhousie, where the Daula Dhar Range just  begins to dip into the river Ravi. Built around and upon five little hills, covered with a  thick growth  of  ban oak, conifers and a large variety  of  trees  and shrubs, in nestles amidst stately oaks and pines. Skirting  these hills are a number of good roads of which the Upper Bakrota  Mall is the finest. Nearly 5 km in length, the road commands a double-barrelled panorama of the plains to the south and the  snow capped mountains  to  the north. Comprising of  five  districts,  Balun, Kathioang,  Portreyn, Tehra and Bakrota, at heights  ranging  from 1,525  metres (5,000ft) and 2,738 metres (7,800  ft)  Dalhousie's natural  beauty,  invigorating  air,  warm  sunshine  and   quiet surrounding  add, enchantment to its open and colourful  valleys, level  walks and treks amidst the dense forests. On a clear  day, once  can see the rivers - Chenab, Beas and Ravi,  meandering  down the  rose grey  vista of the valley hills while  the  snow capped ranges  of  Dhaula  Dhar rise to awe-inspiring  height  of  5,490 metres (18-20,000 ft) to 6,405 metres (21,000 ft). Over  120  years old, it owes its name to Lord  jemes  Romsey.

In western Himachal Pradesh, the hill station of Dalhousie is full of old world charm and holds lingering echos of the Raj era. It covers an area of 14 sq. km. and is built on five hills - Kathlog, Patreyn, Tehra, Bakrota and Balun. It is named after the British governor General of the 19th century, Lord Dalhousie. The town's average height is 2036 m, and is surrounded by varied vegetation - pines, deodars, oaks and flowering rhododendron. Dalhousie has charming colonial architecture, including some beautiful churches. Its location presents panoramic views of the plains and like a long silver line, the river Ravi twists and turns below Dalhousie. The spectacular snow-covered Pir Panjal Range of mountains in Jammu and Kashmir,Pangi Valley of Chamba and Sach Pass are also visible form this enchanting town.

By Rail : The Nearest Railway Station Pathankot, 80 km away.

Taxis and buses are easily available from these places.

Panchpula : Panchpula, a beautiful spot, is barely 3 kms. from G.P.O. On the way to Panchpula is Satdhara springs gurgling with refreshing water, believed to contain some medicinal properties. Panchpula stream is the main source dchamba6.jpg (17713 bytes)of water supply to Dalhousie and Bahloon. The stream springs from the north side of DayanKund and runs down a picturesque ravine to the waterworks of Panchpula. There is an elegant monument erected at Panchpula where several streams meet at one point. This monument, a samadhi was built in memory of great revolutionary Sardar Ajit Singh who breathed his last in Panchpula. There is a Tourism restaurant and several chai shops in Panchpula, that offer hot and cold beverages and snacks.

Kynance : Kynance is a private residential building of Dharamvirs. This building was constructed during the year 1933 by Dr. N.R.Dharamvir of Lahore. This building acquired historical significance due to the reason that Neta Ji Subhash Chander Bose, a class fellow of the wife of Dr. Dharamvir, stayed with them for a period of 7 months beginning May, 1937. Before arriving in Dalhousie, Neta Ji was in British Jail where his health had deteriorated. On the request of his younger brother the British High Court released Neta Ji on parole on health grounds. It brought Neta Ji to the climate of Dalhousie. Kynance is barely 50 kms. from G.P.O. It lies hidden from the public eye below the road. An insignificant looking board bearing the name of Kynance hangs from a tree and is discernible to only those tourists who have an eye for details.

Subhash Baoli :Just approximatly 1 km from G.P.O. is a charming natural spot called Subhash Baoli. Neta ji Subhash Chander Bose during his 7 months sojourn in Dalhousie in 1937 is believed to have spent most of his days by the side of this water body, meditating amidst dense woods of Cedar and meeting his party workers. This place lies on the G.P.O. - JandriGaht Road. A canopy with seating facilities has been created by the local administration at this place.

St. Andrew's Church : St. Andrew's Church commonly known as the Church of Scotland was built in the year 1903 at Baloon by Protestant Christians. The Church is approximately one and half kms. from Dalhousie's bus stand. The Church building is in good condition, recently a brick boundary wall has been erected around it to save the building from mischief mongers.

St. Patrick's Church : This Church is situated in Baloon, Dalhousie Cantt., on Military Hospital road approximately 2 kms. from main bus stand. St. Patrick's Church is the largest church in Dalhousie having a seating capacity of 300 persons in its main hall. The Church was built in the year 1909 and the dressed-stone building is still in good condition. This Church was built exclusively from contribution made by officers and ranks of the British Army. At present the Church is managed and maintained by the Catholic Diocese of Jalandhar.

St. Framcis Church : This Catholic Church is a very prominent monument on the Subhash Chowk. This Church was built in the year 1894 from the contributions made by Army and Civil Officers and Civilians. This Church is managed and maintained by the Cathoilic Diocese of Jalandhar. St. Francis' Church on Prtrain hill is believed to have been built on the lines of a certain church in England. Beautiful glass work and intricate stone work can be seen in the Church. Service is conducted every Sunday.

By the side of the Church is the residence of the Priest. The building is called Alverna better known to the local people as "Lambe Chole Wale Padri Ki Kothi".