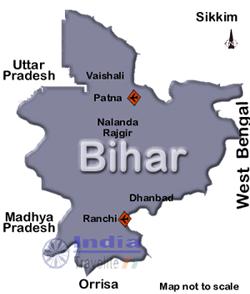 Dhanbad district was constituted in 1956 by carving out the old Dhanbad subdivision, Chas and Chandankiyari police stations of the Sadar subdivision of the erstwhile Manbhum district. Dhanbad is Police district since 1928. The re-organisation of the districts in the State of Bihar which took place after 1971 did not affect the district of Dhanbad. Dhanbad Municipality is the chief town and the headquarters of the district. In the year 1991,Bokaro District was constituted by carving out Chas Sub-division of Dhanbad district and Bermo Sub-division of Giridih District.

The early history of the greater part of the Chotanagpur plateau is shrouded in mystery and that of Dhanbad district is particularly so. Details of even later periods are difficult to trace as the present district formed but a small and insignificant part of Manbhum. In the Settlement Report for Manbhum (1928) it has been stated that no rock inscriptions, copper plates or old coins were discovered and not a single document of copper plate or palm leaf was found in course of the Survey and Settlement operations. The oldest authentic documents produced were all on paper and barely even a hundred years old.

In view  of these circumstances the District Gazetteer for Dhanbad (1964) merely reproduces the chapter on history in the Settlement Report of 1928 which pertains to the entire district of Manbhum.

It was a small village of the erstwhile district of Manbhum which had its headquarter in Purulia (now in West Bengal). Manbhum in turn, derived its name from Raja Man Singh who was gifted this territory by Emperor Akbar , following his victory in a certain battle. The district being extremely vast and far-flung soon got divided into Birbhum, Manbhum and Singhbhum, for administrative purposes.

However, on 24.10.56 Dhanbad was declared a District on the Recommendation of  the State  Reconstitution Commission vide  notification 1911 . Its geographical length , extending from North  to South , was 43 miles and breadth , 47 miles , stretching across East to West . In 1991 a part of Dhanbad was sliced away  from Bokaro district , diminishing thereby its total area to 2995 Sq.Kms.

Earlier, the district was split into two sub-divisions - Dhanbad sadar and Baghmara. The former incorporated 6 blocks, while the latter had four and together they enclosed 30 Bagar Palikas, 228 Panchayats and 1654 villages. The then vastness of the district called for two police headquarters, based at Bokaro and Dhanbad respectively. Meanwhile, the district as its stands today, has only one sub-division called the Dhanbad Sadar. There are presently, 8 blocks here viz. Jharia, Baghmara, Dhanbad, Nirsa, Govindpur, Baliapur, Tundi and Topchanchi. The blocks in turn have 181 panchayats and 1348 villages. As per the 1991 Census, the total population of the districts stands at 19,49,526 of which the number of males have been recorded as 10,71,913 along with 8,77,613 females.

Distance of Various Places from Dhanbad :

There are presently, 8 blocks here viz. Jharia, Baghmara, Dhanbad, Nirsa, Govindpur, Baliapur, Tundi and Topchanchi. The blocks in turn have 181 panchayats and 1348 villages.