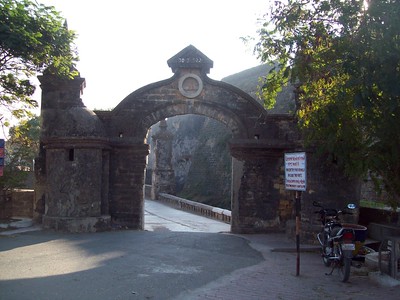 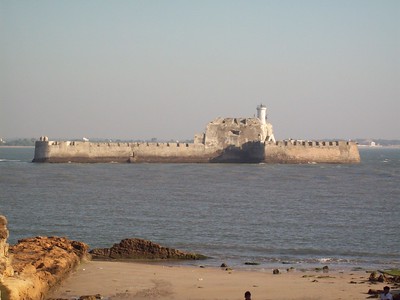 A bSt. Paul's Churcheautiful blend of Sun, sand and sea, is a God's gift to those in quest of a blessed turf where the wary weight of the unintelligible world can, for a while, be lightened and the waking soul can hear the music of the spheres. It is an island retreat gently rocked by the wind and the wave from the Arabian Sea. It offers you undisturbed peace and an unusual holiday.

Diu a former Portuguese enclave, and now a Union Territory, is steeped in history. It was a seaport and naval base of considerable strategic importance from the 14th to 16th Centuries. It was also a vital trade link with the rest of India for traders overseas. Diu was under the sway of Chanda and Vaghela dynasties till the 14th Century. The Muslim rulers ruled over the island town till 1380 AD. Then came the mighty wave of invasion of the foreign rule that lasted well nigh upto 450 years.

By Road : Diu has excellent, all weather road links with Ahmedabad, Bhavnagar, Rajkot and Baroda. Luxury buses ply between Mumbai and Diu. It is also air-linked with Mumbai.

By Air: Jet Airways is operating a daily flight between Mumbai and Diu.

By Rail: Nearest rail-head is Veraval about 90 Kms, which provides an onwards connection to Ahmedabad, Mumbai and other cities.

Jallandhar Shrine:Jallandhar Shrineallandhar Shrine is located on a hillock close to the beach. This small shrine crowned with a dome, contains a niche wherein a stone carved face of Jallandhar is seen. Near by there is also a temple of Goddess Chandrika. The beach is at a distance of 1 km from Diu Town.

St. Paul's Church:St. Paul's Church is dedicated to our Lady of Immaculate Conception. The construction of the church was started in 1601 and was completed in the year 1610. The main facade of the church, perhaps the most elaborates of all Portuguese churches in India, is adorned with curiously treated volutes and shell-like motifs, and immediately attracts visitors. The facade has been illuminated by flood lights adding to the evening city glow.

Diu Museum:The old St. Thomas Church has been converted into a museum which houses the antique statues, various stone inscriptions of the earlier rulers, wooden carvings, idols, shadow-clocks and other important artifacts have been collected from various sites and displayed.

Gangeshwar Temple:This is situated 3 km away from Diu in Fudam village. A Shivlinga, known as Gangeshwar, is in the midst of the rocks on the seashore, and is washed by the tidal waves of the sea.

Fort:Diu FortAmong the places of tourist interest, the Fort of Diu occupies a prominent position. It is an expansive and imposing structure, situated on the coast of the island. The fort commands a magnificent view of sea. It was constructed between 1535 and 1541 AD after a defence alliance, concluded by the Bahadurshah, Sultan of Gujarat, and the Portuguese when the former was attacked by Humayun, the Mughal Emperor.

Fortress of Panikota:Fortim-do-Mar(Panikotha)The Fortess of Panikotta is a magnificent stone structure in the sea, built right at the mouth of the creek. It can be reached only by a canoe or a motor launch. Approximately one nautical mile from the Diu jetty, it also has a light house and a small chapel dedicated to Our lady of sea. Located in the middle of the sea, the Fortess makes for a beautiful view whether seen from the jetty, from the Fort, from the village of Ghoghla or from Diu proper.

Chakratirath Beach:Chakratirath Beach is centrally located and contiguous to the town of Diu. This beach serves the locals as well as domestic and international tourists, providing them with an opportunity to have a worthwhile break. The hill and the surrounding areas and landscape has been beautifully illuminated.

The spot has been developed by constructing an open-air auditorium on the seaside of the hillock.