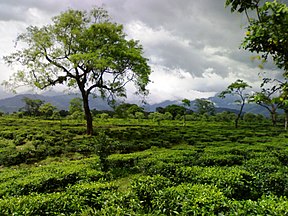 A journey through the rolling hill slopes, mesmerizing lush green tea gardens separated by meandering silvery mountain streams, high Sal forests, quite ethnic villages, vast meadows with a blue outline of the great Himalayan ranges in the horizon, endless sky…. It is Dooars for you!

Lying in the Himalayan foothills in North Bengal, Dooars has great natural beauty. The wildlife-rich tropical forests, innumerable hill streams cutting across the green carpet of tea gardens and undulating plains, low hills rising up from the rivers all make it one of the most picturesque destinations. A drive through the Dooars plains, the gateway to Bhutan and the whole of North east India, can be the experience of a lifetime.

The Dooars valley (also called Duars), stretching from the river Teesta on the west to the river Sankosh on the east, an area covering roughly 130 km by 40 km, forms a major part of the Jalpaiguri district.

Dooars is famous for its rich biodiversity and forests, the most notable of which are Gorumara National Park, Jaldapara Wild Life Sanctuary, and Buxa Tiger Reserve.

By Air : The Nearest Airport is Bagdogra Airport 63 kms

By Rail : The Nearest Railway Station is Behar

By Road : You can easily get regular buses to Doors from other major cities of the country.

Jaldapara Wildlife Sanctuary, Gorumara National Park, Champamari Wildlife Sanctuary : Are habitats of the rare one-horned rhinoceros, the mighty bison, leopard, spotted deer, sambar, hog deer, reptiles, huge wild tuskers, wild boars, and the rarest variety of and birds, including peacocks. Elephant – riding through the Jaldapara forest in search of wild animals, particularly the one-horned rhinos, is specially popular among tourists. Other places of attraction in and around the region include Jayanti, (30 km from Alipurduar) is a beautiful spot encircled by the Jayanti river and the hills around. The leopard Rehabilitation Centre and Nature Park at Khayrabari is 11kms from Madarihat.

Phuntsholling : (161 km from Siliguri via Jaldapara), on the border of Bhutan, is a major gateway to Bhutan.