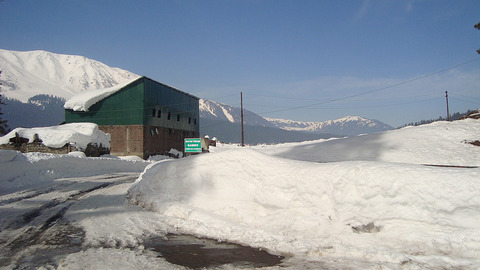 Gulmarg's legendary beauty, prime location and proximity to Srinagar naturally make it one of the premier hill resorts in the country. Originally called ‘Gaurimarg’ by shepherds, its present name was given in the 16th century by Sultan Yusuf Shah, who was inspired by the sight of its grassy slopes emblazoned with wild flowers. Gulmarg was a favourite haunt of Emperor Jehangir who once collected 21 different varieties of flowers from here. Today Gulmarg is not merely a mountain resort of exceptional beauty- it also has the highest green golf course in the world, at an altitude of 2,650 m, and is the country's premier ski resort in the winter.

The journey to Gulmarg is half the enchantment of reaching there-- roads bordered by rigid avenues of poplar give over to flat expanses of rice fields interspersed with picturesque villages. Depending on the season, nature's colours could be the translucent green of spring, summer’s rich emerald, or autumn’s golden hues, when scarlet chillies festoon windows of village homes. After Tangmarg, the climb to Gulmarg begins through fir-covered hillsides. At one point, known simply as View Point, travellers generally stop their vehicles for a few minutes and look out a spectacle of snow-covered mountains, almost within touching distance.

By Air : The Nearest Airport is Srinagar from 50 kms

By Rail : The Nearest Railway Station is Jammu /Barhal

Golfing Holidays : It is for golfing that Gulmarg has long been famous. The Gulmarg Golf Club has been in existence for over a hundred years and there are records, dating from that time, which make fascinating reading. The Clubhouse itself, reminiscent of a Swiss chalet with its quaintly sloping roof, has a rare old character. Temporary members are also welcome: the payment of a daily fee entitles one to play 18 holes on course maintained by the State Tourism Department. A limited supply of golfing equipment is available for hire.

Horse Riding : This is the best activity by which all the sites of Gulmarg can be seen. Horses can be hired directly or through the Tourist Office.

Sledging : A flat wooden board is taken up the hilltop and, without a navigator, allowed to slide downhill on the snow-covered slopes. Sledges as well as sledge-pullers are always available on hire.

Skiing & Winter Spots : Some of the best slopes in the country for beginners and intermediate skiers are available at Gulmarg. Skiing equipment is available on hire from the Ski-Shop. In winter Gulmarg's natural slopes and inclines turn into the country’s premier skiing resort. Not all tourists who visit in winter come for skiing - some simply are there to watch the skiing or to enjoy a holiday in the snow. Many of these are infected with the excitement of the skiers, and have donned their first pair of skis within a short while of their arrival. Among the multitudes of slopes, there are a few which are serviced by ski lifts. Most of the skiing becomes centred on these slopes, which are specially suited to beginners and intermediate level skiers, with ski runs ranging from 200 m to 3kms, instructors are available for both levels.As in the summer, when each individual sets his own pace for a holiday, so also in winter, skiing can be as adventurous as the holidaymaker can want. There are a number of slopes, not serviced by ski lifts, of varying lengths and gradients. Each of these is quieter than the immensely popular ones with skilifts. Advanced skiers often trek in the snow for several hours to the very top of Apharwat peak, to make a descent lasting no more than 30 minutes. And now, with the operation of the Gulmarg Gondola Cable Car, it has become all the more convenient for skiing enthusiasts, as they can gain a ski run of nearly 3 kms with the help of this cable car which goes up to Kongdori. There are a host of snow sports at Gulmarg at this time of the year. Tobogganing, the most popular among them requires no skill. No skill is required - a flat wooden board is taken up the hill and is allowed to descend downhill. There are also snow scooters and snow bobbing, neither requiring Special Skills.