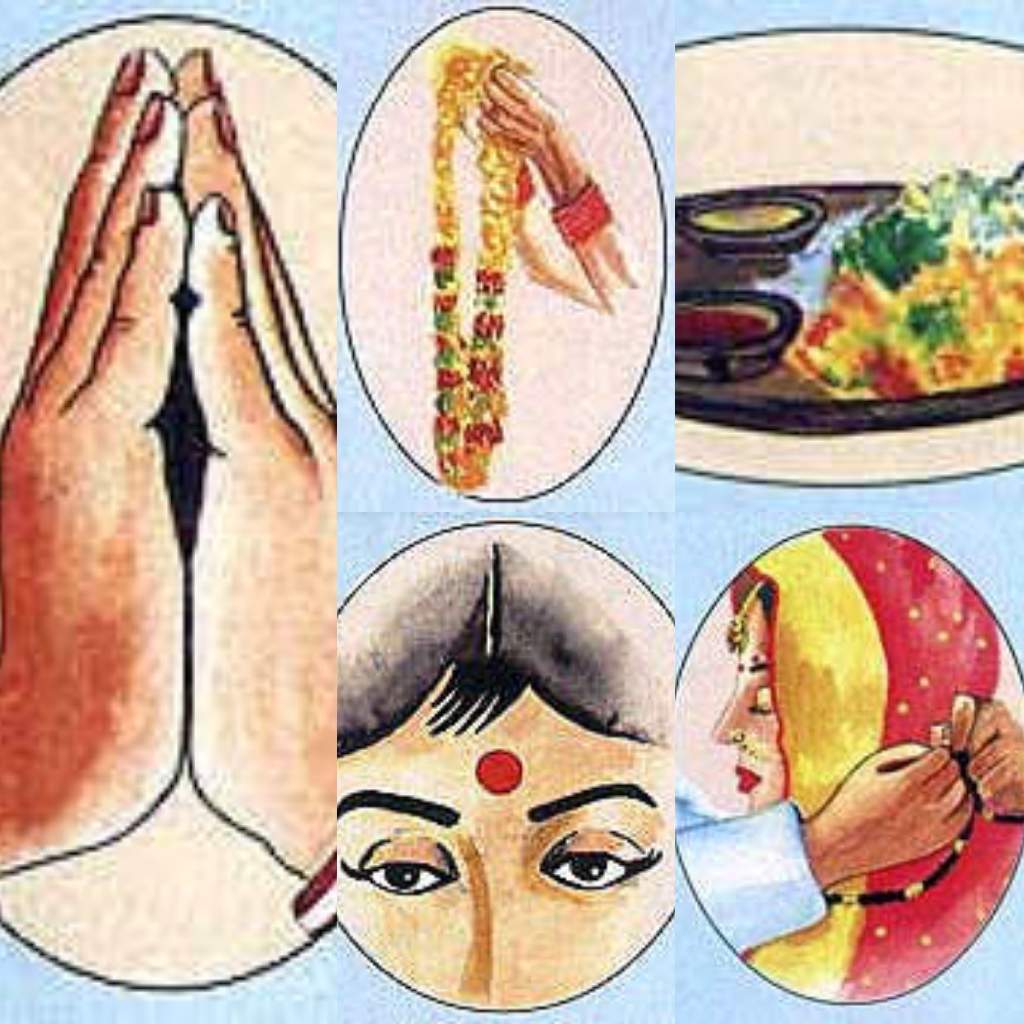 Namaskar
Namaskar or Namaste is the most popular form of greeting in India. It is a general salutation that is used to welcome somebody and also for bidding farewell. While doing namaskar, both the palms are placed together and raised below the face to greet a person.
It is believed that both the hands symbolise one mind, or the self meeting the self. While the right hand represents higher nature, the left hand denotes worldly or lower nature. Other common forms of greetings by various communities and regions in India are - Sat-sri-akal by the Sikhs, Adaab by the Muslims, Vannakkam by the Tamilians, Juley by the Laddhakis and Tashi Delag by the Sikkimese, amongst others.
Tilak: Tilak is a ritual mark on the forehead. It can be put in many forms as a sign of blessing , greeting or auspiciousness. The tilak is usually made out of a red vermilion paste (kumkum) which is a mixture of turmeric, alum, iodine, camphor, etc. It can also be of a sandalwood paste (chandan) blended with musk.
The tilak is applied on the spot between the brows which is considered the seat of latent wisdom and mental concentration, and is very important for worship. This is the spot on which yogis meditate to become one with Lord Brahma. It also indicates the point at which the spiritual eye opens. All thoughts and actions are said to be governed by this spot. Putting of the coloured mark symbolizes the quest for the 'opening ' of the third eye. All rites and ceremonies of the Hindus begin with a tilak topped with a few grains of rice placed on this spot with the index finger or the thumb. The same custom is followed while welcoming or bidding farewell to guests or relations.
Arati: Is performed as an act of veneration and love. It is often performed as a mark of worship and to seek blessings from God, to welcome the guests, for children on their birthdays, family members on auspicious occasions or to welcome a newly wedded couple.
For performing Arati, five small lamps called niranjanas are filled with ghee or oil and arranged in a small tray made of metal. A wick is made out of cotton wool and placed in the lamps. A conchshell filled with water, auspicious leaves or flowers, incense or lighted camphor are also placed in the tray. The lamps are lit and the tray is rotated in a circular motion in front of the deity or the person to be welcomed. The purpose of performing arati is to ward off evil effects and the malefic influence of the ‘evil eye’.
Garlanding: Flower garlands are generally offered as a mark of respect and honour. They are offered to welcome the visitors or in honour to the Gods and Goddesses. The garlands are generally made with white jasmine and orange marigold flowers. They are weaved in thread tied in the end with a help of a knot.
Mangalsutra: Is a necklace made of black beads, worn only by the married women as a mark of being married. It is the Indian equivalent of the western wedding ring.
The mangalsutra is tied by the groom around his bride's neck. Mangalsutra is generally made out of two strings of small black beads with a gold pendant. The black beads are believed to act as protection against evil. The married women wear this to protect their marriage and the life of their husband.
In southern India, the mangalsutra is called 'tali'. It is a small gold ornament, strung on a cotton cord or a gold chain.
Shakha-Paula: Are a pair of shell (shakha) and red coral (paula) bangles worn as marriage symbols by the Bengali women.