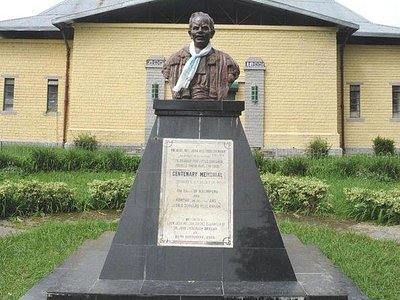 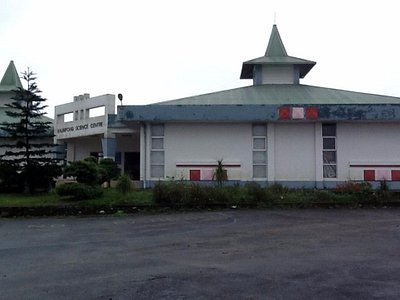 Like the other hill towns, Kalimpong bears a name of historic significance. Once the headquarters of a Bhutanese Governor, the word 'Kalim' means King's Minister and ' pong' - the stronghold hence the stronghold of the King's minister. It is also called 'kalibong' or the spur by the hill people. 'Kalimpong' in local dialect stands for 'Kaulim' which is a fibrous plant which grows in abundance in this region.

The meaning that has found the most favour, however, is the Lepcha meaning of the name-'ridge where we play'. It is said that these local tribesmen used to organise field sports while not engaged in agricultural pursuits - hence the name.

This ' playground on the ridge' has for long been in the shadows of its better known big brother - Darjeeling.  Kalimpong enjoys the best climate in the region. Weekly markets on Wednesday and Saturdays afford some interesting sights and you can haggle for hours with smiling shopkeepers. Durpindara commands an impressive view of the snows.

The dense forests of golden oak trees offset by the rich undergrowth of moss and lichen provide an ideal setting for balmy walks on the thick cushions of russet-brown leaves. One comes to Kalimpong to slow down and be pampered by nature's bounties.

The vast rolling meadows covered with a riot of wild flowers, the sparkling brooks and rivulets meandering lazily by the terraced fields are a feast for one's eyes. Kalimpong is a blaze of colour throughout the year owing to the richness of its stunning flora. The orchids of this region in particular are famous for their infinite variety as well as their delicate tints.

Monasteries of Kalimpong date back to 1836 and tell a rich story not only of history but also of local art and culture. You can visit among others, the Pedong, the Thongsa, the Thurpa Choeling monasteries. There as you mingle with boy monks and gyalong blowing lamas, you will want to forget the rest of the world, for you have made a tryst with

By Air : The Nearest Airport is Bagdogra Airport 75 kms

By Road : There are regular buses from other major cities of the country to Kalimpong

The MacFarlane Church : a testimony of the Scottish missionaries’ influence and a monument of Kalimpong’s diverse history, Dr. Graham’s Home, which was founded in 1880 by Dr. John A. Graham, is a sprawling educational institution built on Deolo Hill north of the main township. It stands testimony to Kalimpong’s European influence. It has its own dairy, bakery, poultry farm and vegetable gardens. It is a fitting example of community life, an enthralling experience indeed.

Durpin Dara : an observatory point from where a truly spectacular view of the Himalaya can be enjoyed. This along with the panoramic view of the Teesta and Relli rivers, and the plains far below, provide visitors with a memorable sight. The many flowers nurseries in Kalimpong are known for the diversity of Himalayan flora they house, most of which are exported. For those with an interest in floriculture, a trip to a few of these nurseries is worthwhile.

Zong Dhog Palri Fo Brang monastery : situated near Durpin Dara is another attraction of the area. Tharpa Choeling monastery, built in 1937, belongs to the yellow hut sect of lamas and is another must see. It is situated on Tirpai hill, about 2 km from the main town

Kalimpong Arts & Craft Center : founded in 1897 by Mrs. Graham, is a thriving center where carpet weaving, dyeing, painting, tailoring, leather craft and carpentry are taught, besides promoting the work of local artisans and craftsmen. The Gouripur House, a summer retreat of Nobel laureate Rabindranath Tagore, is where he penned many unforgettable poems

Deolo Hill : one of the numerous hill destinations that warrant a visit. A perfect picnic spot replete with a splendid tourist lodge, run by the Department of Tourism, DGHC. A stay here is definitely recommended as the early morning view of the sun lighting up the Khangchendzonga massif is a marvelous example of nature at her best, a heart stopping sight indeed.

Mangal Dham Mandir : Sprawling over an area of two acres and built in 1993, Mangal Dham is considered to be one of the most splendid temples in India. It is the ground floor of the Dham, where lies the "samadhi" of their revered Guruji. The prayer hall is on the top floor, where the idol of Raj Shyamaji is found, flanked on either side by the Revered Prannath and Shri 108 Guru Mangaldasji. Both the sides of the prayer hall has a vivid picturesque story of Nijanandacharya Shri Devchandraji, meeting Lord Krishna, Rev. Prannathji blessing the brave Bundela Chhatrasal Maharaj and other scenes from the Krishna Leela.