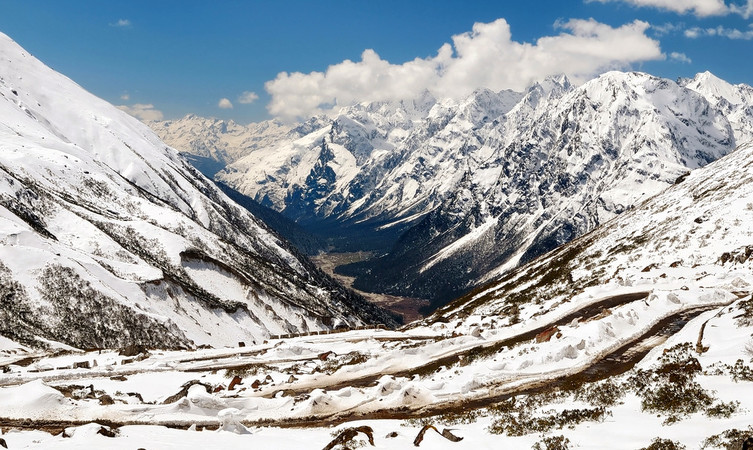 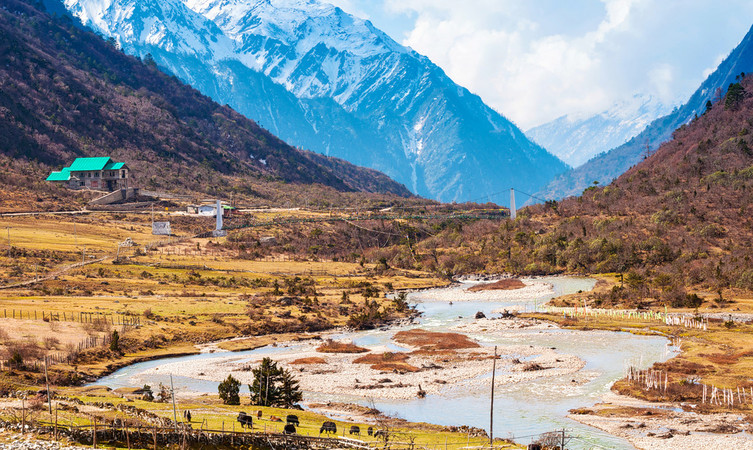 The picturesque mountain village of Lachung, at a height of 8610 ft, embraced by snow capped mountain peaks, breathtaking waterfalls, sparkling streams and apple orchards is the perfect holiday destination. Sprawled across the banks of the Lachung Chu [river] which slices the village in two, Lachung is famous for its apples, peaches and apricots. At Lachung you can visit the Lachung Gompa, built around 1880, the monastery is situated amidst apple orchards across the river from the town centre. Also go see the handicraft centre which has exquisitely woven rugs and blankets.Accommodation is no problem in Lachung which has many hotels and lodges including a Dak Bungalow. But despite throwing its doors open to tourists Lachung still retains its distinctive culture and tradition, including the unique system of self governance called the Zumsa where all local disputes are settled by a totally representative body of the village which is headed by an elected Pipon.You can also visit the Shingba Rhododendron sanctuary through which flows the Yumthang Chu. The sanctuary is known for its abundance of Rhododendron trees and shrubs. Lachung is perfect for an overnight halt before you visit the spectacular Yumthang valley.

Kabi Longstok: Twenty kilometers on the way to North Sikkim, before Phodong, is Kabi Longstok, where the treaty of brotherhood between the Lepcha Chieftain-Tekong Tek and the Tibetan Chief Khye Bumbsa was signed. The spot where the treaty was signed is marked by a memorial stone and is seen on the left side of the road while traveling from Gangtok to Mangan.

Phodong :It is a small town with around ten shops and few hotels almost on the middle of the Gangtok-Mangan journey. A police outpost, a senior secondary school, Jawar Navodya Bhidhayala and a physical health center are near by.

Phodong Monastry:Phodong Monastry belonging to Kargyupa Sect(karmapa), is situated about a kilometer uphill by a jeepable road that bifurcates from the north Sikkim highway a little bit ahead of Phodong towards Mangan. The monastry was built by the Chogyal Gyurmed Namgyal somewhere in the first quarter of the eighteenth century.

The main annual Puja (worship) is performed on the 28th and 29th day of the tenth month of the Tibetan calendar when the religious Chaams or the dances are also performed.

Ruins of Tumlong Palace.: The capital of Sikkim was shifted from Rabdanste to Tumlong in the beginning of neneteenth century. It is the fourth capital of Sikkim and remained capital for around ninety years. The ruins of the palace of Maharaja is seen just below the road between Phodong Monastry and Labrang Monastry.

Mangan:Mangan is the capital of North Sikkim. It is 65 kilometers from Gangtok. It lies at an altitude of 3950 ft. .The Bazar(market) with around fifty different types of shops is situated on the north sikkim highway. The district collectorate where the district collector and other government department function is situated around two kilometers uphill from market at a place called Pentok and is approached by a link road. On the sides of this link road while traveling towards Pentok lies a public ground and Mangan Senior Secondary School. Just opposite to Mangan, separated by river Teesta, is seen a sloppy villages namely Lingdong, Barfok, Hee-Gyathang falling under Dzongu area. From the Pentok area, the picturesque view of mount Silnoulchu (a Range of mount Kanchendzonga) is also seen.

Singhik ViewPoint: Singhik is situated four kilometers away from Mangan towards the north. It has few shops on the roadside and a junior high school. The view point lies just on the road side from where is seen a very picturesque view of mount Silnoulchu . Right downwards from the viewpoint is seen the confluence of River Teesta and River Kanaka. Other sorrounding places too look very beautiful from the viewpoint. A nice and clean guesthouse, suitable for a night halt is also available near by.

Chungthang:Chunghthang is 30 kilometers away from Mangan further north. It is around 95 kilometers away from Gangtok. It is a small town on the way to Yumthang surrounded by high mountains that seem to be almost touching the sky. At an altitude of about 5,600 ft, Chungthang lies at the confluence of the Lachen Chu (Teesta) and the Lachung Chu {“ Chu” means river in bhutia language}. The north Sikkim highway bifurcates here to take different routes for Lachen and Lachung.

Spot of interest in Chungthang is a legendary rock having an imprint which is believed to be the foot mark of Guru Padmasambha. There is a small opening in the rock which remains filled with spring water. Adjacent to the rock there is a small stretch of paddy field defying the condition that demands the growth of paddy in this area.

Yumthang Valley & Hot Spring.: Situated at an altitude of 12000 ft., Yumthang is a valley between the snow clad hills all around. It is around 75 kilometers from district headquarter, Mangan and around 95 kilometers from Gangtok. The route to Yumthang from Lachung-adjoining the Singba Forest Reserve has a very picturesque landscape and is lined with rhododendrons that bloom in different colour at their best during the