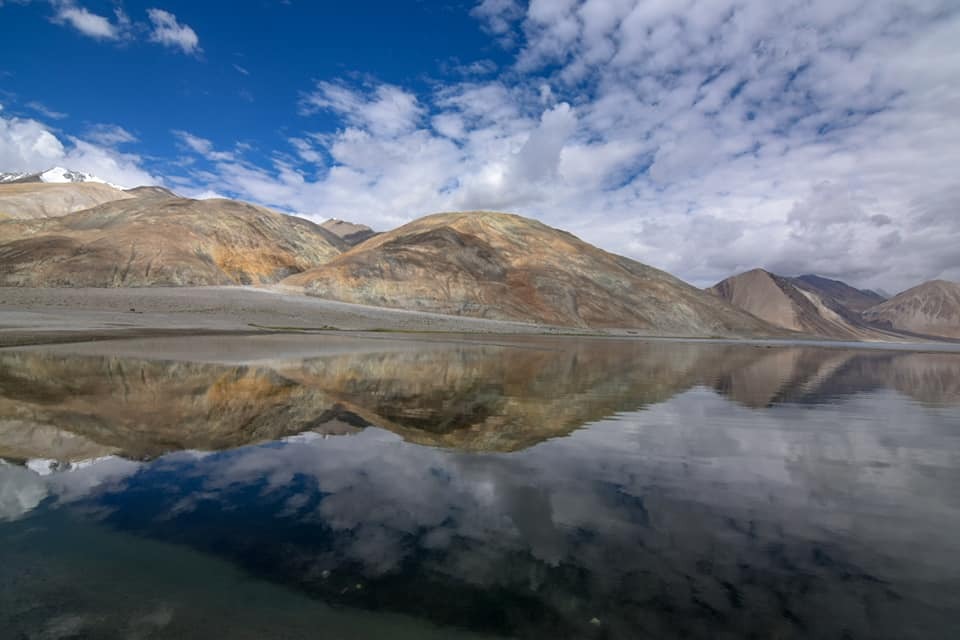 The Himalayan kingdom of Ladakh is one of the most remote regions of India, and lies embedded in the mountain world of the Karakoram in the north-west, the Himalayas in the south-west, and the Trans-Himalayas at its core. The Indus, rising in the interior of the Tibet, flows through the centre of Ladakh, going further on to the western part of Pakistan. Ladakh is a high-altitude desert and temperatures, which can reach as low as -45 C in winter, are the most extreme here.

The remote and inhospitable land of Ladakh has always fascinated city-dwellers with its images of a stark and barren landscape juxtaposed alongside lush green fields, monasteries precariously perched on mountain tops, and an intriguing blend of cultures. Leh, the present capital of Ladakh, was once the central meeting-point for tradecaravans from Central Asia and the plains of India. Religious ceremonies, monastic festivals, and oracles who have the power to heal as well as divine are regular features of the Ladkhi landscape. Crafts such as metal-work, painting, weaving, and wood-carving are widely found in the region; archery and polo are the traditional sports there. One of the most visible features of Ladakh's rich cultural heritage are its ancient monasteries. Most of these are built on sheer cliffs and are still actively functioning. This is truly one of the last few places where one can experience Tibetan Buddhism being practiced in its original form.

Leh the erstwhile capital of the kingdom of Ladakh is now a dream destination of many and the Mecca of adventure enthusiasts! Leh, one of the coldest deserts in the world is located at a distance of 434 Kms from Srinagar and 474 Kms from Manali (Himachal Pradesh). At the time of reorganization of districts in 1979, Ladakh was divided into Leh and Kargil and now Leh district is synonymous with Ladakh and vice-versa! Built by the Buddhist kings of Ladakh in 1553 the Leh Palace was once the world’s highest building. The primary attraction within the Leh city this palace is structurally similar to the Potala Palace in Lhasa. Now only the palace prayer room lives up to the sense of former grandeur of Leh Palace. Leh is a backpacker's haven with numerous trekking trails, valleys, and picturesque lakes. Renowned as the land of monks and monasteries there is lots to see in this amazing piece of land. There are three sub divisions of Leh with 7 different tour circuits identified for international tourists in Leh with breathtaking Himalayan panorama.

By Road : Leh is connected with Srinagar by road which remains closed during winter months due to heavy snow fall especially on Zojila pass, the pass in the Great Himalayan Wall that serves as the gateway to Ladakh. The road to Leh opens in late May or early June, & closes by mid-October every year depending upon the weather conditions. Journey from Srinagar to Leh via Kargil is approx. 434 Kms and takes 2 days with night halt at Kargil where accomodation is available in Hotels / Guest Houses etc. Jeeps and cars are also available for the journey from Srinagar to Leh. The most dramatic part of this road journey is the ascent upto 11,500 ft and 3,505 m high Zojila pass. The J & K State Road Transport Corporation (J&K SRTC) operates regular Deluxe and Ordinary bus services between Srinagar and Leh on this route with an overnight halt at Kargil. Taxis (cars and jeeps) are also available at Srinagar for the journey. Groups can charter Deluxe and A-class buses for Leh, Kargil or Padum (Zangskar) from the J & K SRTC at Srinagar.Leh is connected with Manali also by road with distance 473 Kms. Manali-Leh road has been serving as the second overland approach to Ladakh. This road also remains closed during winter months. This high road traverses the upland desert plateau of Rupsho, altitude ranges from 3,660m to 4,570m. A number of high passes fall enroute among which the highest one known as Taklang-La is world's second highest motorable pass at an altitude of 17,469 feet/5,235m. Himachal Pradesh Tourism, HRTC and J & K SRTC operate daily Deluxe and Ordinary bus services between Manali and Leh. The bus journey between Leh and Manali takes about 19 hours or two days with an overnight halt in camps at Serchu or Pang. Maruti Gypsy and jeep taxis are also available, both at Manali and Leh at quite reasonable rates.

Alchi Monastery : Alchi is a village and monastery in the Leh district of Ladakh situated on the bank of Indus River 70 km downstream from the capital in Leh.

Jama Masjid : Jama Masjid is one of the historical mosques in Ladakh, which is situated in the heart of Leh, the capital of the state.

Matho Monastery : Matho monastery or Matho gompa is a Buddhist monastery which was founded in the 16th century by the Lama Dugpa Dorje.

Shanti Stupa : The Shanti Stupa is an impressive white-domed structure in Changspa that is beautifully illuminated at night.

Spituk Monastery : 9 Km from Leh, the monastery standing on a conical hill with 3 chapels was founded in the 11th century.

Stok Place : Stok Palace is the residential palace of the royal family and descendants of King Sengge Namgyal.

Thikshey Monastery : The monastery is referred as 'Mini Potala' of India as it resembles Potala Palace in Lhasa, Tibet.

Trek Safari : The most natural way of exploring the wonders of Himalayan Mountains is trekking and Safari.