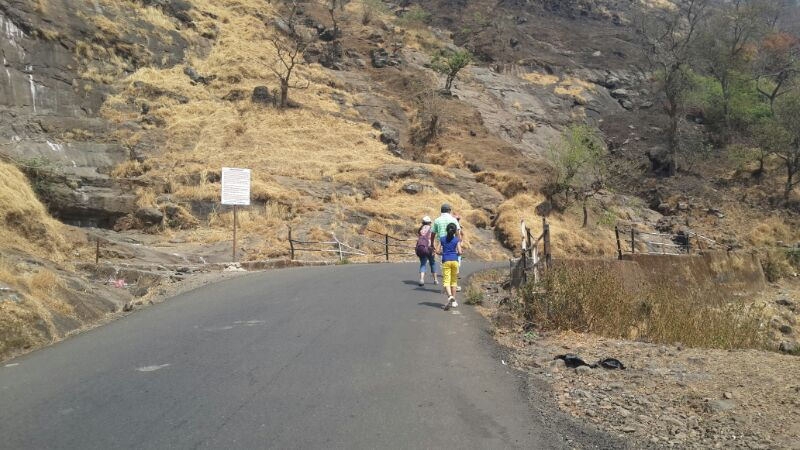 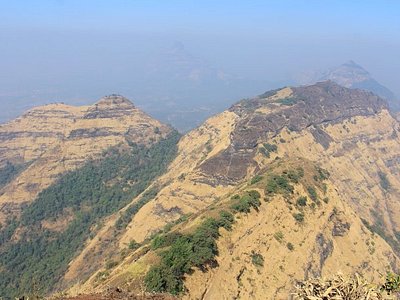 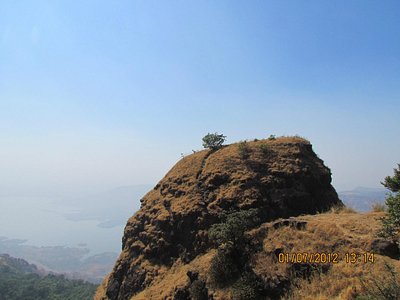 Matheran is an undulating hilltop cloaked in shady trees, that sprawls languidly at an altitude of 800 m. The journey involves an adventurous two hour ascent in a toy train. With food and drink vendors and monkeys jumping on and off, as the valley glides by sedately! Or a tough 11 km. hike through thick and shady forests. Matheran’s cliffs with incredibly steep drops to the plains below create stunning viewing points.

These panoramic vistas, by day and night, leave you feeling light-headed. The Hart Point offers a view of the lights of Mumbai at night! All of Matheran is a series of such quixotically named points that are popular, if isolated, sites for picnics and fireside revelry at night. Charlotte Lake, the Panthers’ Caves and the Paymaster Park are other attractions, especially for children. The old world charm of the British and Parsi homes is an irresistible draw. The main bazaar offers a variety of items such as cane and leather articles, hats, chappals and the sinfully sweet speciality – CHIKKI ! Vehicles of any kind are not permitted in the town, which makes it a very quiet, serene place.

At a time when even some of the most remote tourist places have begun to suffer from pollution, primarily due to the increase in vehicles, can there be a hill station which can lay claim to being totally free of such ill-effects? Surprisingly, there is one, and it remains free of noxious pollutants mainly because no motorized vehicles are allowed on its tiny roads or the pathways that lead into deep woods. This is Matheran, Asia’s tiniest hill station but with lots to offer by way of scenic view points, long treks through forested areas, and a quaintness of its own.

Matheran, is Asia’s tiniest hill station and remains pollution free because no motorized vehicles are allowed on its tiny roads or the pathways that lead into deep woods. It has lots to offer by way of scenic view points, long treks through forested areas, and a quaintness of its own.

The best part about going to Matheran, the starting point for which is the railway station of Neral on the Mumbai-Pune route, is that you can buy a ride on the tiny train that traverses the narrow gauge track to the top, offering you on the way breathtaking sights even as it negotiates the bends and the curves. The train makes its way around the verdant slopes and through thick forest cover, passing on its way a ‘one kiss tunnel’ to take brief halts at Jumma Patti, Water Pipe and Aman.

Known as the ‘pedestrian’ hill station because all vehicles have to per force stop at Dasturi and tourists have to either walk or hitch a horse ride into Matheran, it is perched at 803 meters above the sea level. The hill station in itself is an undulating hilltop cloaked in shady trees and ringed by walking trails leading to several vantage points from where you can have stunning views. It is also marked by its market place – a single street – which houses restaurants and shops. Spread across Matheran is a mix of homes and hotels – some still retaining their old-world charm of spacious bungalows while the others offering the most modern conveniences.

The nearest airport is Mumbai, 110 kms away. If you are travelling in your own car, the nearest halting point is Dasturi where you can park it for a fee. The mini train covers the 21 km distance from Neral to Matheran is about two hours and operates at fixed hours except for the monsoon season when the service is suspended. For accommodation  Many Star hotels Available in Matheran

Nearest airport is at Mumbai, 110 kms away.

From Neral, a taxi can be hired. The distance is 8 kms.

Mini train –21 kms from Neral (two hours). Check the train services time schedules as they are suspended during the monsoon.

Season : October to May.

Matheran offers you a great panoramic view from as many as 33 points located here. Some of the favourite points to visit are, Porcupine Point, Echo Point, Panorama Point, Heart Point, Monkey Point (for the monkeys that inhabit the place) and many more where you could catch the most breathtaking views of the sunrise and sunset as well as of the Sahyadri range and its valleys. In fact, the Panorama Point is rightly also called the Sunrise Point to catch that perfect sunrise.

You can also visit the Charlotte Lake and the Panthers Caves. One of the best things that you can do at Matheran, is to take a ride on the toy train, which takes you through the One Kiss Tunnel and very many fascinating little spots. In fact this is your ride from Neral to Matheran and is a great way to start your trip.

A ‘must try’ is the delicious fudge as also fresh honey. You can indulge in street cuisine here, sip cups of piping hot masala tea or try out the snacks in small eateries or the bakeries.

Curio shopping is an indulgence that Matheran offers on its M G Road where you can buy the hill station’s famous chikki, leather footwear, bags and other knick-knacks. The street is also lined with provision stores and souvenir stalls selling walking sticks, riding whips and other paraphernalia.

Leisurely walks and horse rides under the umbrella of trees are the best way to explore the many designated lookout points spread across three different ranges and each point has a peculiar charm and interest of its own. For example, Porcupine Point is from where you can get a fantastic view of the sunset while Echo Point is where you will hear a lot of shouting because of the echoes that the hills throw back at you. Elsewhere, the Hart Point offers a view of the nightlights of Mumbai. From Rambagh Point, Khandala and Karjat can be spotted, and Alexander Point provides views of Chauk Valley. From Panorama Point you can get a bird’s eye view of Neral town and on a clear day, even as far as Mumbai in the west.

Another picturesque spot is the Charlotte Lake, fringed by a forest, with a dam at one end. The best time is post monsoon when the lake is brimming to its full and one can see beautiful waterfalls cascading down the hill slopes. If you are lucky, you could also catch a glimpse of some migratory birds.

Plan a trek from neral to matheran.