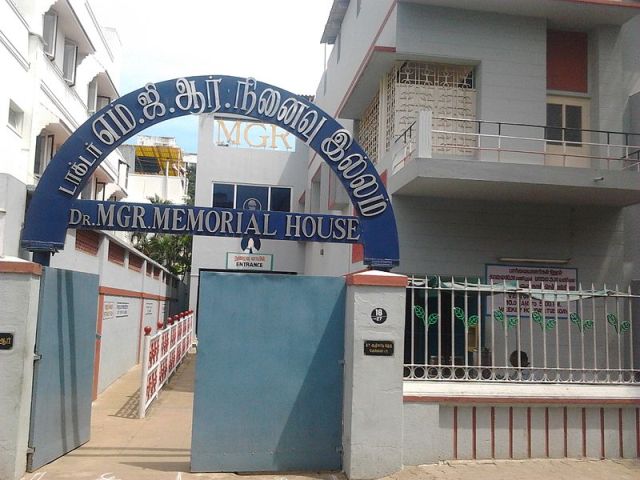 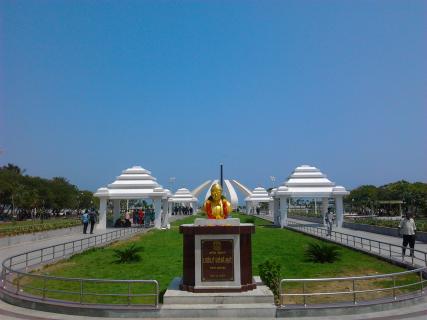 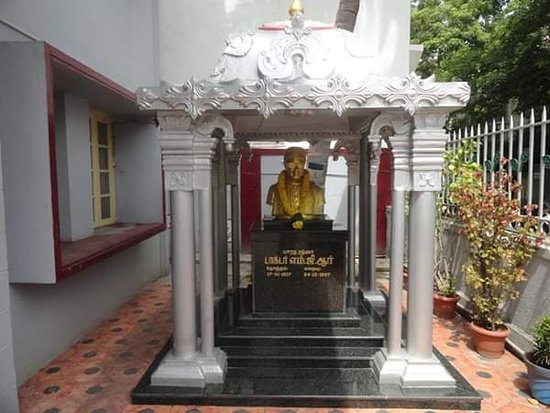 Maruthur Gopala Ramachandran (January 17, 1917 – December 24, 1987), popularly known by his initials MGR. , was a Tamil film actor, producer and politician. As a well known humanist, he served as the Chief Minister of Tamil Nadu from 1977 until his death in 1987.

M. G. R. was born in Nawalapitiya near Kandy, British Ceylon (present day Sri Lanka), to Gopalan and Maruthur Satyabhama. His family was originally from Vadavannur, Palakkad, Madras Presidency (later part of Kerala), but his father had migrated with his family to Sri Lanka. After the passing away of his father MGR along with his mother and brother came back to India and settled in Kumbakonam (Madras Presidency now part of Indian State of Tamil Nadu). He studied till his third class (Five years of primary education) and due to extreme poverty had to go for work to earn a living. He joined a drama troupe called Original Boys Company. Later, he entered the world of cinema, becoming an actor, and later a director, producer and editor, acting in more than 125 movies and becoming a great actor. He went on to win many awards for his performances including the National Award for Best Actor for his performance in a Tamil Language Movie "Rikshawkaran" in 1972.  He was also awarded the India's Fourth Highest Civilian Honour "Padma Shri" by the Government of India in 1960 which he declined to accept.

He was initially a member of the Indian National Congress but later joined the Dravida Munnetra Kalazham (Dravidan Progressive Federation) led by Dr.C.N.Annadurai. Till 1972 he worked very hard for the success of the DMK and later founded a new political party Anna Dravida Munnetra Kazhagam (ADMK) which was later renamed as All India Anna Dravida Munnetra Kazhagam (AIADMK). MGR served as the Chief Minister of Tamil Nadu from 1977 to 1987 for three consecutive terms. He was awarded a Honorary Doctorate by the University of Madras and The World University, Arizona, USA.  After his passing away in 1987, he was posthumously awarded the India's Highest Civilian honour "Bharat Rathna" in the year 1988.

Janaki Ramachandran, born as Vaikom Narayani Janaki (November 30, 1923 – May 19, 1996), was an Indian Tamil actress and politician. She was born to Rajagopal Iyer and Narayani Amma in the town of Vaikom in Kerala State. She was a successful actress and starred in more than 25 movies including Velaikari, and Aiyiram Thalaivangiya Aboorva Chintamani. She starred opposite M. G. Ramachandran in many films and later on married him.

When M.G.Ramachandran died in 1987, she succeeded him as the Chief Minister of Tamil Nadu and the Leader of the AIADMK  party. Janaki Ramachandran became the Chief minister of the State of Tamil Nadu in January 1988 after her husband's death. Janaki Ramachandran gifted her property in 275, Avvai Shanmugham Salai (Lloyds Road) in Chennai to house the headquarters of the All India Anna Dravida Munnetra Kazhagam party in 1986. She gifted property worth crores of Rupees for the establishment of educational and charitable institutions in Tamil Nadu.

The MGR Memorial house is situated in Arcot Street, T.Nagar and was opened for public viewing in 1990 by Mrs.Janaki Ramachandran in the presence of Dr.N.C.Raghavachari, Shri.N.P.V.Ramasamy Udayar and many well wishers of Late.Dr.MGR. This house in Chennai was the official residence of Late Dr.MGR and was used by him for more than two decades. This house is open for public viewing from 9:00 am to 5:00 pm on all days except Tuesdays.

As soon as you enter the house you can see the dark green coloured car bearing the number plate TMX 4777, ready to 'take-off' with the sirens glowing. Some songs featured in Late Dr.MGR's films are being played in a low tone all along. The shields presented to Late Dr.MGR is displayed in an orderly manner, in the reception. Once you reach the first floor you will land in his office room. The swords, spears, heavy wooden clubs used by him, his plate, tumbler, telephone instrument, the shirts that adorned him, the medals won by him, television, the books read by him, camera, trolley, the cloth bandage that was tied on him when he was shot, photographs taken from MGR's films, letters received

by him, Dr.MGR's MLA identification card, his famous cap and dark glasses, pen, the 'Bharath Ratna' medal won by him, the certificate given to him when he was conferred with the doctorate degree are all exhibited here. Actually there are lots of photographs taken right from his first film 'Sati Lee