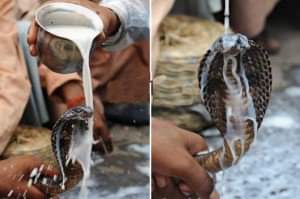 Nag Panchami is marked as worship of snakes. In Hindu mythology, the cobra has a special significance and the earth, it is believed, rests on the head of 'Shesha' - the thousand-hooded cobra. It is a festival in the honour of the Snake God, Shesha Nag.

On this day Goans worship the snake by offering milk and doing Puja.

According to the Hindu calendar, Nag Panchami is celebrated in the month of Shravan (July-August). During the monsoon when the snakes come out of the pit they are worshipped as they protect crops from getting damaged by rats and other rodents.

The victory of Krishna over the Kaliya snake is commemorated on this day. For this reason Krishna is known as "Kaliya Mardan". The legend is as follows:

Young Krishna was playing with the other cowherds, when suddenly the ball got entangled in the high branch of a tree. Krishna volunteered to climb the tree and fetch the ball. But below the tree there was a deep part of the river Yamuna, in which the terrible snake Kaliya was living.

Everybody was afraid of that part of the river. Suddenly Krishna fell from the tree into the water. Then the terrible snake Laiya came up. But Krishna was ready and jumping on the snake's head he caught it by the neck. Kaliya understood that Krishna was not an ordinary boy, and that it would not be easy to overcome him.

So Kaliya pleaded with Krishna: "Please, do not kill me." Krishna full of compassion asked the snake to promise that henceforth he would not harass anybody. Then he let the snake go free into the river again.

The festival falls during the rainy months and people visit temples specially dedicated to snakes and worship them. Shiva temples are also favoured places for veneration, as snakes are considered dear to him.

People offer sweets and milk to the snake deity and the day is celebrated with folk dances and songs, especially in the countryside. On this day devotees pour milk into all the holes in the ground around the house or near the temple so that the snakes may drink it.

Sometimes, a small pot of milk with some flowers is placed near the holes and if a snake actually drinks the milk, it is considered to be extremely lucky for the devotee. The festival is celebrated with much enthusiasm by all, especially women.

Snake charmers carry cobras in baskets and collect offerings from the public in the streets. Usually, wandering snake charmers visit homes with their pet cobras. Each household offers milk to the reptile.

In the rural areas, the day generally begins with the puja of a mud replica of a snake. Then there could be singing of "artis" by the menfolk, while the women dance the exuberant "fugddi". The traditional Goan sweet called "patolleo" is made on this day.

It is a nature-friendly Hindu festival. On this day, the people abstain from ploughing or digging in the field or anywhere else, in a symbolic gesture of protecting the snakes, meaning wildlife.

Air: Goa’s international airport is Dabolim which is 35/25 Mile from Panaji on the coast near Vasco da Gama. Major Air routes from Goa.

Bus: Goa, Maharashtra and Karnataka state road transport corporations operate services out of Panaji’s Kadamba bus stand. Many private bus companies have offices outside the entrance to the bus stand. Luxury and airconditioned buses are available to Mumbai, Bangalore, Hampi and other destinations. Most private interstate buses arrive and depart from a separate bus stand next to the Mandovi Bridge. Paulo Tours and Travel has nightly sleeper coaches to Hampi, Mumbai and Bangalore.

Train: Goa’s two main stations are at Margao and Vasco da Gama and 2 Konkan Railway station called Karmali and Thivam. Karmali is the station for going to Panjim and Thivam is the station to go to Mapusa/Calanguate. Bookings can be made at either of these or at the train reservation office in the Kadamba bus stand. Trains to all major Indian cities are available.

Motorcycle rental: Hiring a motorcycle is popular with many travellers in Goa. Available vehicles are Enfields, Yamaha 100s and Kinetic Honda scooters. In high season, on a daily basis, you may have to pay up to Rs 300 for a scooter, Rs 400 for the small bikes and Rs 500 for an Enfield. You may be required to give in your passport and a sizeable deposit as security. If you are involved in an accident you’ll be required to pay at least for the damage to the rented bike.

Motorcycle taxi: Motorcycles are a licensed form of taxi in Goa. They are much cheaper than other transport if you are travelling alone with a backpack that can be carried on  bike

Bicycle rental: Bicycles can be hired in all the major towns and beaches of Goa for around Rs 40 per day.

Boat: Boats can be hired to cross the many rivers of Goa. The main ferries are:

Siolim – Chopdem This can be used for Arambol and places to the north. Services run every half hour from 6.30 am to 1 pm; Tickets cost Rs 0.75/3 for passengers/motorcycles.

Dona Paula – Mormugao : This ferry runs between September and May (till 5 pm) only. The crossings are rather erratic and take between 30 and 45 minutes. Buses wait on either side for the arrival of boats.

Other Ferries:  Approximately 20 other ferry services operate in the state. These include: Panaji to Betim, Aldona to Corjuem, Pomburpa to Chorao and Ribandar to Chorao.

[Call for information, Itinerary options,  Quotes for Tailor Made Holidays,&a