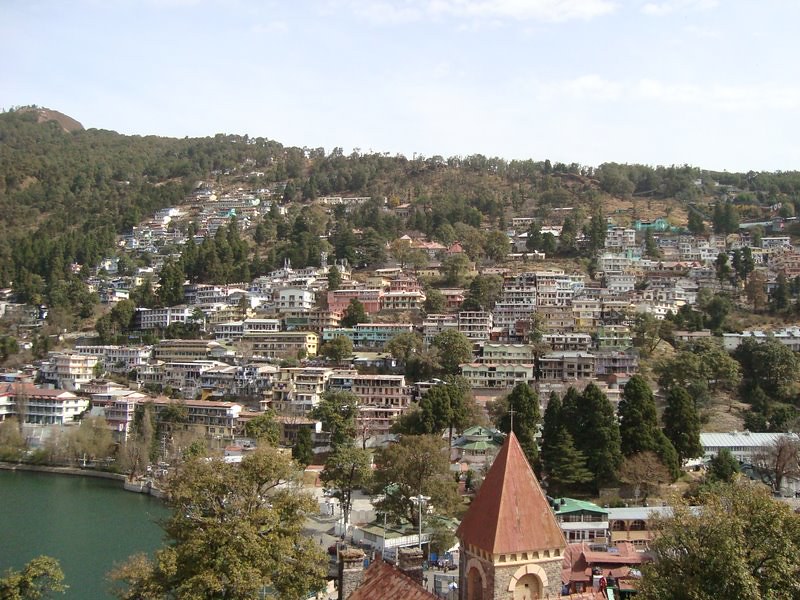 Commonly known as the "Lake District of India", Nainital is one of the most beautiful hill stations in North India. Surrounded by mountains on three sides Nainital is located around the beautiful lake Naini Tal. This lake resort is situated at a height of 1,938 meters. There are many legends associated with the place. According to one, Nainital has derived its name from the Goddess Naina while the other legend says that when the Goddess Sati lost her eyes, she was being carried by Lord Shiva and a lake was formed. ('Naina' means eyes and 'Tal' means lake.) This beautiful small town in surrounded by seven hills, popularly known as 'Sapta-Shring' - Ayarpata, Deopata, Handi-Bandi, Naina, Alma, Lariya-Kanta and Sher-Ka-Danda. The majestic mountains and the sparkling waters of the lake add an immense lot to the beauty of the town.

The city is a beautiful mixture of all the hues of nature. Naini lake is the pride Nainital and the many gaily coloured yachts on the sparkling lake have now become synonymous with this beautiful picture-postcard resort. A national level yachting competition is organized here during the season.

Nainital used to be the summer capital of United Provinces (Uttar Pradesh) during the British era and remained so for many years even after Independence. The British were the first to 'discover' Nainital as a holiday resort in 1841. Today, it has grown into a highly popular tourist destination. The emerald waters of this mountain lake continue to retain their charm and beckon tourists from far and wide.

Once this area had many lakes and it was called the region of 60 lakes. Most of the lakes in the region have gradually disappeared and whatever remains is just a glimpse of what they might have been in the past. Today the life of Nainital revolves around the lake Naini though in close proximity lie other lakes e.g. Bhimtal, Naukuchiatal, Sattal etc. These picturesque lakes have retained their charm and the region is justifiably called The Lake District.

Nainital has an advantage of being situated in vicinity of several other lesser known hill stations that are connected through all season motorable roads.Vantage points around Nainital offer a panoramic view of Himalayan peaks on one side and the plains spread out on the other. Narrow wooded lanes through forests of oak, pine and deodar are excellent for short refreshing walks. The older parts of Nainital also retain colonial vestiges, including sprawling bungalows, public schools, churches and the old Christian cemetery.

On reaching the head of the town where the highway from the plains meets the main Mall at Tallital, one gets a dramatic view of the beautiful Naini Lake that seems to be nestled in a remote cocoon. Brightly coloured sails of yachts dot the calm waters of the lake while crowds of holiday makers throng the Mall at its edge. Boating in the lake is just one of the favourite activities of the tourists. Others come here for trekking in the densely forested mountains that surround the town.

By Air : The nearest Airport is Dehradun & Delhi

By Rail : Kathgodam is the nearest railhead.

By Road : Nainital is well connected via roads.

Naina Lake : In a mythological account, this picturesque lake is said to be one of the emerald green eyes of Shiva's beloved consort, Sati (nain is a Sanskrit word for eye). When Sati's father failed to invite Shiva to a family sacrifice, she burnt herself to death in protest. Shiva gathered the charred remains in his arms and proceeded to engage in a cosmic dance tandav, which threatened to destroy the creation. To bring the dance to an end, Vishnu chopped up the body into pieces, and the remains were scattered. The Naina Devi Temple at the northern end of the lake is built over the precise spot where the eye is believed to have fallen.

Snow View : From the Nainital town the Snow View top is a 3 kilometer trek. Part of it can also be covered comfortably by cars and small vehicles. At the top, one can have a close up view of Nanda Devi (7816m), the second highest Himalayan peak of the country.There's a small temple dedicated to Dev Mundi, housing images of Goddess Durga, Lord Shiva, Goddess Sita, Lord Rama, Sri Lakshmana and Sri Hanuman. From Snow View one can walk west to another point and then continue on to the main road to Kilbury. One can also continue up to Cheena Peak or head down the road to Sukhatal, passing great views of the lake en route. On the walk up to Snow View one can take a peek in the tiny Gadhan Kunkyop Ling Gompa of the Gelukpa order (of which the Dalai Lama is the spiritual head).

Naina Peak : Naina Peak is locally known as the Cheena peak. This is the highest point in Nainital. From here Nainital appears like a majestic shining bowl. You can walk or take ponies to reach the peak. Naina peak also gives a good view of the Camel's Back, another interesting peak. There are no hotels or restaurants on the top so it is advisable to carry food and water along.

Naina Devi Temple : At the upper end of the attractive Nainital lake, a temple of Naina Devi is located. Dedicated to the patronizing goddess of the town, Naina Devi, this temple and its complex becomes the location of the famous Nanda Devi Mela, held every year on Nandashtami during September.

Hanuman Garhi : The place is of great religious importance. Situated at a height of 1951 meters, this place was established by Baba Neem Karauli. A very beautiful Hanuman temple is at the top. Watching the Sunset from Hanuman Garhi, is an out-of-the-world experience. You can leisurely walk down to Hanuman Garhi from Nainital town.

Observatory : The clearly visible skies over Nainital encouraged the government to set up an observatory here. The observatory has one of the most advanced telescopes in India. This telescope measures the movement of stars, planets and other heavenly bodies to great precision. The entry in the observatory is by permission only and timings are fixed.

Zoo Gardens : Nainital has a small but a very beautiful Zoological garden. There are several animals including Deer, Bears, Tigers and many more. Special efforts have been put in to make the environment of the zoo hygienic and clean. Not surprisingly this zoo is one of the cleanest zoos in the country. The zoo can be reached on foot or by small vehicles.

St. John's Church : This church was built in 1847. A brass memorial is kept in memory of the people who were buried in the infamous landslide in the 19th century. The few bodies which could be dug out were buried in the church premises.

Bhowali : Located at 1706 meters above the sea level and 11 km away from Nainital Bhowali is famous for its scenic grandeur and is an important hill fruit market. It is also known for its T.B. sanatorium established in 1912.

Ghorakhal : Famous for the temple of Lord Golu (the most famous and revered local deity of Kumaon) and the well-pedigreed Army School, Ghorakhal is at a distance of 3 km from Bhowali.

Sat Tal : At a distance of about 23 km from Nainital and at an altitude of 1370 meters, Sat Tal is a unique, unforgettable spot having cluster of lakes snuggled amidst thick forests. Western travelers have often compared it to Westmoreland of England. As one approaches Sat Tal, the first lake one comes across is the old Nal-Damyanti Lake. On moving further, there is the ashram set up by Stanley Johns, an American Missionary. Next lake is called Panna or Garuda. As we move down, there is a cluster of three lakes. These lakes are named after Ram, Laxman and Sita.

Kilbury : Kilbury is 12 km away from Nainital town. Located amidst green forests this tranquil place provides a break from the city. Kilbury gives a breathtaking view of the Himalayas. The forest department has an old guest house here. Kilbury takes one into the laps of nature from the hustle bustle of the town, in no time at all.

Kainchi Dham : On the Nainital - Almora Road, 9 km from Bhowali and 17 km from Nainital is a modern pilgrim centre. This place has achieved recognition owing to the ashram of the famous Neem Karauli Maharaj.

Bhimtal : 22 km from Nainital and 11 km from Bhowali at an altitude of 1370 m, Bhimtal takes pride in its beautiful lake, that offers magnificent vistas for visitors.

Mukteshwar : 51 km from Nainital, this exciting place is at an altitude of 2286 m. Surrounded by fruit orchards and thick coniferous forests, it was developed by the British as an important Veterinary Research Institute (IVRI) in 1893. It is the celebrated scenic spot overlooking long ranges of the Himalayas. An old temple of Lord Shiva exists on the top of a rock.

Naukuchiatal : Situated at a distance of just 3 km from Bhimtal the deep crystal clear lake called Naukuchiyatal with its nine corners is a captivating sight. This beautiful lake is 983 m long, 693 m broad and 40.3 m deep. It is located within the confines of an enchanting valley, offering an opportunity of angling and bird watching. There is ample scope for rowing, paddling or yachting.