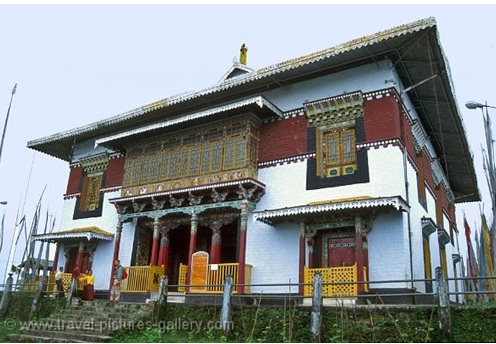 Pelling is the nearest point to Kanchanjunga mountain, third highest peak in the world & thirteen other snow-capped peaks.

Pemayangtse monastery situated at a height of 6840 feet is the second largest monastery in Sikkim. This ancient monastery belonging to the Nyingma-pa sect and is the head of all other monasteries of this sect in Sikkim. The view of the mountain ranges from Pemayangtse is perhaps one of the finest.

Sikkim's West District is probably the most enchanting, certainly the most sacred place in the Eastern Himalayas. It was here that in 1641 A.D. the first Chogyal(King) of Sikkim was consecrated by the three great Lamas, at Yoksum. The oldest monastery of Sikkim is also in this District.

Besides heritage sites and monasteries, west Sikkim is extremely rich in biodiversity. It has a mind-boggling array of flora ad fauna. The hills and valleys abound with numerous orchid, primula, rhododendrons, marigolds, magnolia and cherry to name a few. The exotic aroma of the large cardamom waft along mist-laden hillsides, home of the musk deer and the red panda. Innumerable butterflies flit among the verdant woods lending colour to the rich green hue. Sikkim has more that 500 species of butterflies. Perhaps the pride of the flora of West Sikkim are its dense rhododendron forests varying from the towering giants of the lower regions to the dwarf varieties found above the snow-line. The delicate flowers too are as variegated, from the blood-red thomsonii to pale lilac to brilliant white.

West Sikkim is indeed a favourite of the Gods, blessed with the rich and natural heritage of Sikkim, truly a jewel of the Gods.

The laid back, scenic, but rapidly swelling hamlet of Pelling, situated 2,085m above sea level only 2-km beyond Pemayangtse, looks north towards the glaciers and peaks of Kanchenjunga.  High above the forest- covered hills, in an amphitheatre of cloud, snow and rock, the entire route from Yoksum over Dzongri La to the Rathong Glacier can be seen.

Pelling itself consists of little more than a road junction, Helicopter pad and numerous hotels, creating the so-called "Bengali Boulevard", a strip of highly unimaginative identikit concrete blocks. Luckily, from most angles this development is hidden by the forested slopes and Pelling offers numerous attractive walks and hotel terraces from where one can gaze in awe at the world's third highest peak.

By Air : The Nearest Airport is Bagdogra Airport 140 kms

By Road : There are regular buses from other major cities of the country to Pelling

Sanga Choling Monastery : A 4-km trail rises from the playing fields just above Pelling to reach the small monastery of Sanga Choling, one of the oldest gompas in Sikkim. This gompa is another of Lhatsun Chenpo's creations, and is highly venerated among the Nyingmapa. Gutta by fire, it has been rebuilt and houses some of the original clay statues.

Dubdi Monastery : One of the oldest monastery in Sikkim is located on a hilltop above Yuksom. It was established soon after the consecration of the first Chogyal of Sikkim, Phuntsog Namgyal, in 1641 A.D.

Norbu Gang Chorten and the Stone Throne are also at Yuksom. :  The site has since been declared as an archeological heritage. The stone throne built for the coronation in 1641 A. D. Still site silently under a gigantic cypress.Yuksom was the first capital of the erstwhile kingdom of Sikkim. It derives it's name after the three Great Lamas who met here to consecrate the first Chogyal (Yok-Meeting of the great Lama, Sum -Three).

Ruins of Rabdentse : The second capital of the kingdom of Sikkim, is another archeological heritage. Rabdentse lies atop a small hillock where ancient masonry and crumbling stonewalls narrate a silent story.

Tashiding Monastery : One of the most sacred of all monasteries in Sikkim, was built in the 18th Century by Nadak Sempa Chenpo, one of the three great Lamas. It is believed that just a mere glimpse of this monastery would cleanse all sins.