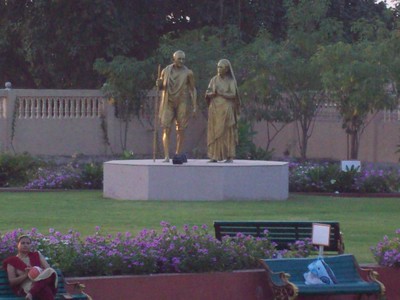 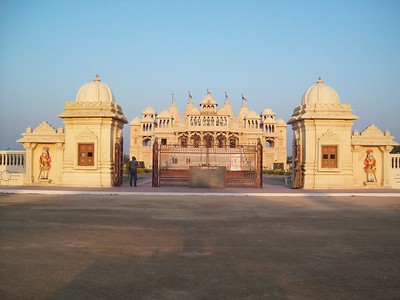 Let us begin our journey where Gandhi began his. On October 2, 1869, Mohandas Karamchand Gandhi was born in a 3-storey blue haveli in the city of Porbandar, where his father, uncle and grandfather had all been prime ministers to the Jethwa Rajput rulers of the princely state. The city had been a prosperous trading center for centuries, conducting much commerce with Arabian and Persian Gulf countries, as well as East Africa, under the Mughals, the Marathas and the British. Now it is a city of industry, with cement and chemical factories ringing the city, contributing to a general  griminess around town.

The site of Gandhi’s birth, now called Kirti Mandir, has been converted into a small museum about him, with an exhibit of old photographs, some of his very few possessions and a nice library of books either by him or relating to Gandhian philosophy and practice. The room where his mother gave birth to him has, as expectable, nothing special about it. It was the family home.

Two km from the middle of town is Bharat Mandir, with exhibits of sculptures, pictures and other examples of Indian tradition. Next door is the Nehru Planetarium, with regular programs about astronomy. Both sites are open from 9am-12pm and 3pm-6pm and entry to each is Rs.3/-.

The ancient port of the Saurashtra peninsula, on the Arabian Sea is mentioned in Skanda Puran as Sudamapuri and Ashmavati. It is the city of a mythological story about the great friendship between Lord Krishna and Sudama. Porbadar was the last capital of the Jethwa Rajputs, who ruled this area for about 1200 years – shifting capitals from Ghumli, Ranpur and Chhaya. Present day Porbadar was established as a capital by Rana Sartanji in 1785 AD. Porbandar originally a fortified town, with high rampart walls, bastions and five gates, lost its fortification by the order of Colonel Lally in 1888 AD. Even today, a ritual to circumambulate the fortification is performed by Hindus.

The prosperity of Porbandar was due to maritime trade and it was a thriving port in the Mughal period. It was attacked by the Portuguese in the wake of achieving supremacy over sea trade in 1531 AD. The Walker Treaty of 1807 AD between the ruling clans of Saurashtra and the British put an end to the feuds and it resulted in a favorable environment for the civic development of the Porbandar State.

The most impressive feature of Porbandar is the city planning and the stone buildings with ashlars masonry and rich carving. The facades of the houses on either side of the streets, with series of windows, carved gateways, using eclectic architectural language, invites tourist to experience the streetscape on foot. The series of vistas enriched by a skyline of temples and beautiful public buildings and edifices overlooking the sea on Marine Drive puts Porbandar on the list of coastal heritage towns of Gujarat.

Kirti Mandir is built next to the birthplace of Mahatama Gandhi, who was born here in 1869 AD. Lacs of Indian tourists visit the house of the Mahatama and Kasturba, his wife. Kirti Mandir has a Gandhian library and a prayer hall.

There is no Indian, who has not heard of the legendary friendship of king and devotee – Krishna and Sudama – starting from the ashram of Sandipani Rishi and culminating at the court of Lord Krishna, in the city of gold, Dwarika. The story comes alive with the sight of a beautiful temple in the middle of Porbandar town. In whole of India, this is the only temple dedicated to Sudama. The maze on the platform in the campus is an interesting feature.

v      By Road: ST and private buses come here from Ahmedabad, Rajkot, Dwarka, Veraval, Jamnagar and Junagadh, among others.

v      By Rail: Porbandar has a railway station which has connecting trains to places like Rajkot, Ahmedabad and Mumbai.