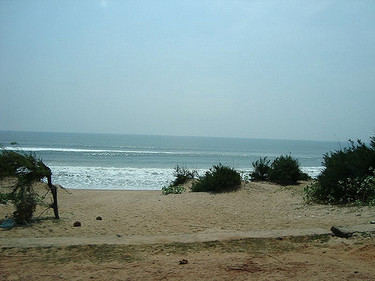 Puri's vibrant and narrowly packed streets with brightly painted houses, pastiches of colonial buildings, has a charm of its own. The Jagannath Temple which soars out of these streets dominates the skyline. The Chakratirtha (CT) Road to the East, the waterfront of Marine Drive Road to the West, and the score of hotels, resorts in the middle and the crammed Bada Danda street with lodges and shops selling religious souvenirs and the colourful pattachitra paintings are the hubs of action. The long stretch of coast, much cleaner towards the eastern end, remains crowded with sun bathers and swimmers in the season with local fishermen serving as life guards. Barring the pilgrims, congregating in hundred thousands during the annual Rath Yatra, Puri's traveller scene is dominated by Bengalis from Kolkata and some young western and Japanese visitors exploring the laidback charm of the town mostly on foot or bicycles.

Puri City Guide - According to tradition, originally this dense forested area was inhabited by the Sabaras, a tribal group who predated the Dravidians and the Aryans. It is believed that the Sabaras, originally worshipped the Lord Jagannath as Nilamadhab, and made images of red tree trunks. This deity was later adopted by Brahmins. Some believed it to be the sacred site of Dantaputra, which once held the holy Buddhist Tooth relic. Until the time of its association with the Hindu reformer, Shankaracharya, Puri was an obscure outpost along the coastal trade route linking the South with eastern part of India. The Shankaracharya brought it to the religious map of India as a centre of teaching and learning a more ascetic form of Hinduism and established one of its four mathas here in the 8th century. The beginning of the 12th century witnessed the rise in influence of the Ganga dynasty with which the centre's religious importance got further consolidated. A great temple was founded by Anantavarman Chodaganga in 1135, dedicated to Purushottama (or Vishnu) and the name got changed to Jagannath (Lord of the Universe) in the 15th century during the reign of Gajapatis. The Vaishnava saint Chaitanya Mahaprabhu from Bengal, spent many years at Puri in the 15th century. The temple now dedicated to the worship of Krishna, an incarnation of Vishnu, is one of the four dhams in India.

By Air : The Nearest Airport is Bhubaneswar Airport 60 kms

By Road : You can easily get regular buses to Puri from other major cities of the country.

Jagannath Temple : The Temple of Lord Jagannath built during the 12th century A.D. by Chodaganga Deva dominates the landscape for kilometers around. Being the tallest temple (65 metres) in Orissa, it is one of the most magnificent pieces of monuments of India. In front of the main gate stands a 16 sided monolithic pillar (11 metres high), called Aruna Stambha which formally stood in front of the Sun Temple and was brought to Puri during the 18th century A.D. Some of the other important temples are Gundicha, Lokanath, Sunaragauranga, Daria Mahabir and Tota Gopinatt. There are also a number of holy tanks like Narendra, Markandeya, Sweta Ganga and Indradyumna. There are many Monasteries locally known as Mathas also of touristic interest.

Balighai (8 km ) : The Casuarina fringed Balighai beach is a famous picnic spot. The Sun and fun at the mouth of the river Nuanai is unforgettable.

Brahmagiri (25 km) : Brahmagiri is known for the living shrine of Alarnath. Streams of pilgrims visit Alarnath during Anabasara of Lord Jagannath. Nearby is the shrine of Baliharachandi on the solitary sand dunes.

Satyabadi (20 km ) : Satyabadi or Sakshigopal is known for the shrine of Lord Sakshigopal. It is believed that the visit to Puri is incomplete without a visit to Sakshigopal. The temple is only 2 km away from the main road leading to Puri and is convenient to visit.

Baliharachandi (27 km ) : 27 km to the south-west of Puri is the temple of Baliharachandi. Situated on a sandy hill near the sea and adjacent to the mouth of the river Bhargavi, Goddess Durga is worshipped here as Baliharachandi. The scenic beauty of this place is ideal for group picnic.

Raghurajpur (16 km) : One of the most famous artists village in Orissa, the village of Raghurajpur boasts not only of the exquisite pattachitra's and talapattachitra's, but also of being the native place of Guru kelucharan Mohapatra, the famed Odissi dancer. Even today, under the tutelage of renowned Guru's, young boys can be seen practicing the Gotipua dance here. A visit to Orissa would definitely be incomplete without a visit to this little village.

Satapara (52 km) : Satapara, a retreat in nature on Chilika Lake, has been thrown open to visitors. Its location near the confluence of the Lake with the Bay of Bengal, and proximity to Puri (52 km), makes it an ideal spot to enjoy Chilika. The thrilling sight of dolphins round the year and abundance of migratory and resident birds in winter make it a preferred place for a vacation with nature.