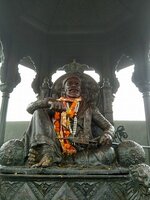 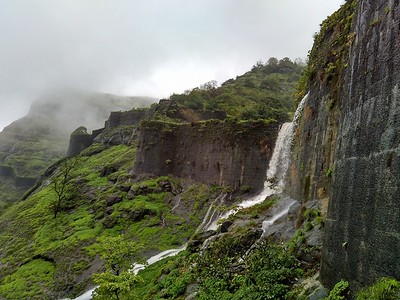 High up on the hill of Raigad where the strong winds will buffet you and the valleys around will mesmerize you with their scenic splendour is the fort of Chhatrapati Shivaji Maharaj, the great king of the Maratha Empire. This was the capital during his rule, also important for the fact that Shivaji’s coronation took place here on June 6, 1674. It was also here that he breathed his last. The fort today is a favourite tourist destination, also high up on the popularity chart with avid trekkers because of its difficult terrain.

Raigad is situated in the taluka of Mahad and the fort rises 820 meters above sea level. As historical records show, the fort was known by different names at different times, including Tanas, Rasivata, Nandadeep and Rayari. It was initially under the control of Chandrarao More of Jawali and captured by Chhatrapati Shivaji Maharaj when he defeated More in a fierce battle in 1656 CE, following which he re-named it Raigad. It was around this time that the boundaries of the Maratha Empire i.e. Swarajya were expanding and Shivaji felt the need to shift the capital from Rajgad. He therefore set his sights on Raigad, a fort he liked because of its steepness and a rather peculiar structure which would dissuade his enemies or make it too difficult for them to attack it.

Shivaji then deployed Hiroji Indulkar, an architect and engineer, to carry out the necessary modifications as well as add new structures to accommodate his army. The wonderful bastions, ramparts, wells, water reservoirs, residences both for commoners and dignitaries, gardens, pathways, pillars, and the palatial structures for the king and his family thus came into being. Some of the other attractions of the fort were the big temple of Wadeshwar (also known as Jagadishwar), other smaller temples, Mahadarwaja, huge storage rooms for food grains, Ratnashala, Nagar Peth that consisted of 43 structures in a row, and much more.

Hiroji also carved a stone inscription near the Wadeshwar Temple and listed there the things that had been constructed on the fort. This inscription is in Sanskrit and Devnagari script. But while these were all man-made structures, Raigad also offered one of the most ‘natural’ protections through its Bhavani Tok and Takmak Tok with vertigo-inducing drops of 400 meters on both sides. A famous structure on the fort is locally called as the Hirkani Buruj. A very popular legend is associated with it. It is regarding a woman called as Hirkani, who used to sell milk on the fort. Usually she used to go to the village at the base of the fort, immediately after selling the milk as her infant son was kept at home. One day she was locked inside the fort as the gates got closed after sunset and she did not have any way to go to her village. But the concern for her child made her descend a precarious cliff in the dark. Learning this Chhatrapati Shivaji also told her to repeat this feat. On doing this again she was awarded by him.Later on Chhatrapati Shivaji got a wall built in that place and since then it is known as the Hirkani Buruj. The cave at the bottom, called Vaghbil, has a direct connection with the Palaeolithic period, established from the findings of the stone tools belonging to that era. After the death of Shivaji, Raigad was seized by Mughal Emperor Aurangzeb and the name was changed to Islamgad for a brief spell.

To reach Raigad, you can take a state transport bus from Pune or Mumbai and get down at Mahad which is on National Highway 17. From Mahad this fort is just about 26 kilometers, reachable with the help of local transportation. For accommodation, you can try the MTDC resort which is on the hill top. There is also a hotel at the base of the fort. Unlike some of the other hill forts, there is no shortage of water supply at Raigad or of meals.

The nearest airport is at Mumbai

Veer railway station on the Konkan line is the nearest one which is connected by rail to Mumbai.It is about 30kms from Raigad.

Distance from Pune to Raigad is 150 Km.

From Mumbai: Mumbai to Panvel by Goa highway towards Goa up to Mahad-Raigad.

Distance from Mumbai to Raigad is 140 Km.

From Mahabaleshwar: Via Pratapgad-Poladpur Ghat to Mumbai-Goa highway towards Mumbai upto Mahad-Raigad

Distance from Mahabaleshwar to Raigad is 75 Km.

Distance from Kolhapur to Raigad is 250 Km.

By Konkan Railway: Dadar to Panvel upto Vir-Dasgaon Station. From there by road upto Mahad-Raigad.

By motorlaunch: From Gateway of India to Alibaug by motorlaunch in just 45 minutes. From there by road upto Mahad-Raigad.