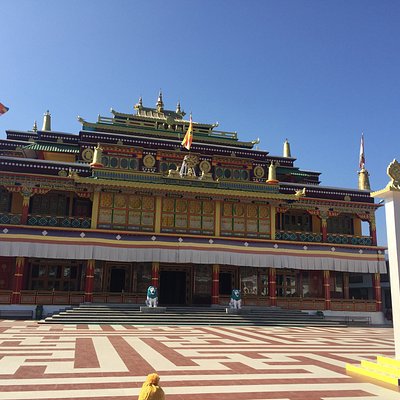 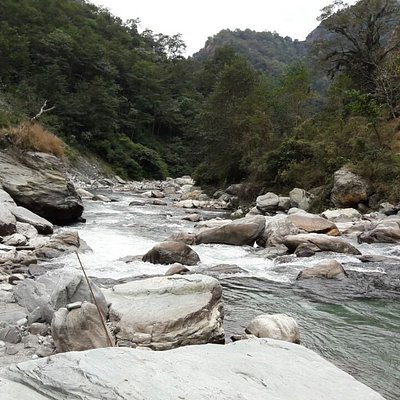 Ravangla is one of the most popular tourist destinations in South Sikkim. At an altitude of 7000 ft, located on a ridge between Maenam and Tendong Hill, Ravangla offers unmatched views of the Greater Himalayas. The beauty of its landscape and its location as a transit point to nearby destinations has made Ravangla a must-visit place. Ravangla stages the Pang Lhabsol festival in a grand manner every year around August-September. The festivities last for three days, culminating in the traditional dances known as ‘Chaam’ on the last day.

8 kms on way to Damthang is the Rayong sunrise view point that offers spectacular views of the first rays of the sun falling on snow peaks. Visit the Ralong monastery as well as the Tibetan Carpet Centre. The traditionally designed and woven carpets available here are said to be the best you can buy anywhere.

In April Ravangla stages its own Tourism, Culture and Crafts Festival.

By Air : The Nearest Airport is Bagdogra Airport 140 kms

By Rail : The Nearest Railway Station is New Jalpaiguri 135 kms

By Road : There are regular buses from other major cities of the country to Ravangla

Borong : Facing the snow-capped mountains is Borong, motorable from Ravangla or by a trek via Maenam. A picturesque village, its beautiful landscape and magnificent view is also host to the hot spring, 'Borong Tsachu'. The trek trail, originating from Namchi or Damthang to Tendong - Ravangla Maenam - Borong (5-6 days) is one of the most interesting trails scaling all the hill tops along the route. The trekker can continue to Tashiding or terminate at Borong and then drive back to Ravangla.

Borong Ralong Hot Spring : Borong and Ralong hot water springs are located within a distance of 7 kms from each other. Popular with visitors from all over the region, these natural spas are said to have strong curative powers. Ralang Cha-chu can be reached after an hour long walk from Ralong monastery while Borang Cha-chu is reached after a 7 km drive to Ralong and then a 40 min walk downhill. For overnight stay temporary huts are available but you have to carry your own bedding and cooking utensils.

Buddha Park (Sakyamuni Project) : 2006 marked the 2550th birth anniversary of Lord Gautama Buddha. The state government in a policy decision had decided to observe the birth anniversary throughout the year in Sikkim. As a part of the celebrations, an initiative was taken by the people of Rabong to construct and install a statue of Lord Buddha at Rabong ,to commemorate the 2550th year, and also to develop the Buddhist Circuit in Sikkim. The state government has already kicked off the Buddhist circuit and this project would give the much required impetus to boost tourism and attract pilgrim tourists to the area.

Kewzing Village : 8 kms from Ravangla is Kewzing Village which offers the opportunity of experiencing the rural life in Sikkim. You can stay here with a local family in village home stays and experience the warmth of Sikkimese hospitality.Kewzing VillageThe Bon Monastery here is the only one of its kind in Sikkim and is a symbol of the determination of a community to preserve their religious traditions. Located 2 kms from Kewzing bazaar is the Mangbrue Gompa, which follows the Nyingmapa sect of buddhism. The invading Bhutanese army used this strategic location in the 19th century and the ruins of their bunkers and outposts can still be seen.

Maenam Hill : Situated at an altitude of 10,300 ft the scenic view from this height is, perhaps, unmatched in this part of the world. Mt. KhangchenDzonga and its surrounding ranges loom above to dwarf the richly forested and rugged hills. On a clear sunny day, it is possible to see the plains of Bengal spanning across Kalimpong and Darjeeling hills in the South and right across the Indo-China border towards the North. A short distance away is the legendry Bhaley Dunga, a kind of rocky spur which juts out from the ridge top and remains suspended in the air above Yangyang village. The trek to Maenam from Ravangla takes about 3 hours.From Maenam hill top one has the option to take the gentle trek to Borong village or follow the more challenging trail taken by the famous botanist, Sir Joseph Hooker, down to Yangang village. A modern ropeway from Yangyang to Bhale Dunga and a Cultural Village at Yangyang are to come up soon.

Temi Tea Garden : The one and only tea estate existing in the State produces one of the top quality teas for the international market. The tea garden spread out on a gentle hill slope originating from the Tendong Hill provides a magnificent view of the surrounding villages. The visit to the factory could be an eye opener for those wanting to know about tea processing methods.A night spent in an old British bungalow or a Getaway facility located at the tea garden could be an enthralling experience of linking the past to the present. A visit to the garden, enroute to the Tendong Hill, could be a rewarding experience for those who want to combine nature and culture as they keep trekking.

Tinkitam : This charming village is the home of Indian Soccer Captain, Baichung Bhutia. Located 6 kms from Ravangla, Tinkitam is worth a visit. The area is also the natural habitat of a rare species of orchid, Paphiopedilum Faireanum or ladys slipper as it is commonly known. Unlike most wild orchids which grow on trees, this orchid is terrestrial and flowers in October-November.