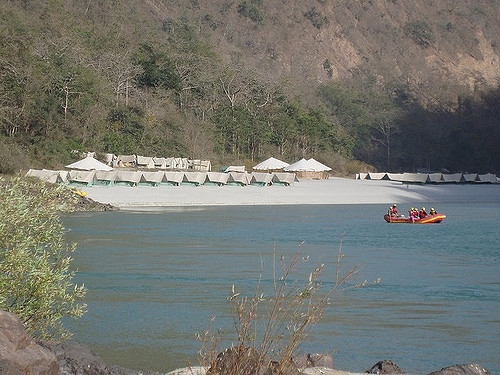 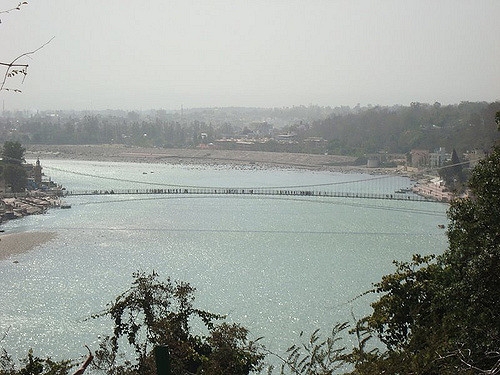 Destination Details
Tour in and around Rishikesh
Hotels in Rishikesh

Rishikesh, a most tranquil place in northern Uttar Pradesh, surrounded by hills and bisected by the wide and sluggish Ganges, is often claimed as the `Yoga Capital of the World'. Back in the 1960s Rishikesh gained instant fame as the site where The Beatles came to stay with their guru, the Maharishi Mahesh Yogi. It is an excellent place to meditate and study yoga. Rishikesh is also a good starting Laxman Jhula point for treks to Himalayan pilgrimage centres such as Badrinath, Kedarnath , Gangotri, Yamnotri.It is rightly called the gateway to the Himalayan Shrines of Badrinath, Kedarnath, Gangotri and Yamunotri. 7 Story Temple Situated 24 km upstream from Haridwar, at the confluence of the Chandrabhaga and Ganga.

Rishikesh has long been a spiritual centre. It is said that the sage Raibhya Rishi did severe penance here and as a reward, God appeared to him in the form of Hrishikesh, hence the name. Rishikesh has numerous ashrams, some of which are internationally recognized as centers of philosophical studies, yoga and meditation. An international yoga week is organized here every year by U.P. Tourism between 2nd and 7th of February. For the adventurous, there are opportunities for white water rafting on the Ganga. The climate here is continental type but its location in the foot hills gives it a pleasant weather throughout the year. One can visit Rishikesh any time of the year.

By Air : Rishikesh is well connected by motorable roads with major destinations of Uttarakhand and northern states of India. Luxury and normal Buses to Rishikesh are easily available from Delhi ISBT Kashmiri Gate and Meerut.

By Rail : Haridwar is well connected by railway networks with major destinations of India. Taxis and buses are easily available from Rishikesh to Muni-ki-reti and Swargashram.

Triveni Ghat : To be found in the heart of town, is the most famous bathing ghat, where most pilgrims take a holy dip earlier than they visit the various temples. This is done generally in the early mornings, with the pilgrims offering prayers and milk at the Ghat and feeding the fish in the water. An amazing sight here is the evening arati, a ceremony accompanied by lights, drums and chanting, with the entire ghat lit with lamps glowing from a distance.

Bharat Mandir : Near the Ghat, is the temple known as Bharat Mandir said to be the oldest temple here built by the Adi Shankaracharya. This 9th century temple has the deity of Lord Vishnu carved out of a single black stone popular as Saligram, and is placed in the inner chambers of the temple. The original temple was said to have been destroyed in 1398 AD. If you are lucky, catch the spring festival also called Basant Panchami celebrated here.

Rishikund : Close to the Triveni Ghat is the very old place of Rishikund where the Saint Kubz is said to have been blessed by the Goddess Yamuna, who filled the pond with her water. The temple of Raghunath dedicated to Lord Rama and his wife Sita is sited here.2 kilometers from Swarg Ashram, is the well-known Lakshman Jhula a suspension bridge 450 feet long and built in 1939. Named after Lord Ram's younger brother Lakshman, it has temples dotting its either side, including the famed Lakshman Temple at Tapovan. One more noteworthy ashram is the 13 storeyed Kailashananda Ashram, with each storey being dedicated to a different deity.

Ramjhula : is situated 3Km north of Rishikesh. It's a very popular place amongst people coming for religious purposes because it has very known Ashrams. Most known is Geeta Bhavan & Swarg Ashram and these temples are very important in Hindu society and you will see much more commotion here then in Lakshmanjhula.To be found at a distance of 12 km from Rishikesh, this temple stands at a height of 926m on top of a hill across the river Ganga. It derives its name from Lord Shiva. According to mythological belief; the cosmic churning of the oceans (Sagar Manthan) for the potion of immortality (amrit) by the Gods and the Demons; produced a venomous liquid, which was consumed by Lord Shiva at this place. As a result, his throat became blue in color, which in Hindi literally means 'Neelkanth' (blue throat). The place is a favorite among the religious tourists.

SwargashramSwarga Ashram : There is a cluster of ashrams on the eastern bank of the Ganges, and the place is popularly known as 'Swarga Ashram'. Most of these ashrams provide courses on yoga and spiritual studies, and are well-known among the tourists. Some ancient temples with beautifully carved statues are also located in the place. There are a few vegetarian food joints that serve various Ayurvedic food and refreshments. A few shops are also found, that sell various trinkets and souvenirs in the form of religious tapes, books, beads, beaded garlands, shells and clothes.

Gita Bhavan : Near the Lakshaman Jhula, is the newly constructed building of Gita Bhavan. It runs a free Ayurvedic dispensary and also has a branch of the Gita Press, Gorakhpur. There are more than a hundred rooms for visitors and this edifice houses various striking paintings and statues of ancient mythological characters. The stories of the ancient epics- the Ramayana and the Mahabharata are beautifully illustrated on its walls. The place is also popular among the tourists.