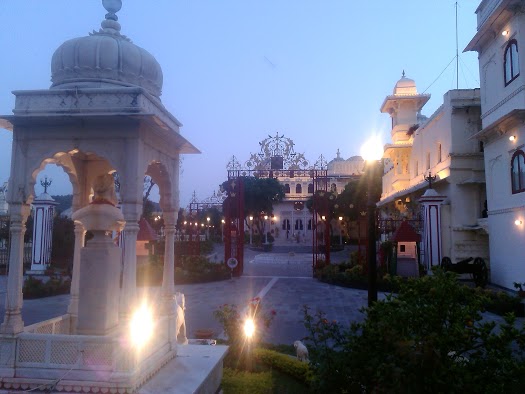 "Saas Bahu Temples" the original name of this temple was "Sahastra-Bahu Temples" but due to mispronounciation localites started calling it Saas Bahu temples. This temple is approximately 20 kilometers away from Udaipur at Nagda in Rajasthan. Nagda has been one of the most important city of Mewar. This temple was built in the early 10th century AD and dedicated to Lord Vishnu. One of the form of lord vishnu is with thousand arms thats why he was called "Sahastra-Bahu".

Although a part of the temples is in ruins but one can still imagine the beauty when it was in glorious shape. We can call it live example of magnific piece of art, architecture, carving and the superfine style of construction.

One can still see beautiful painting on the roof top of temple. Today the temple is heritage monuments and integral part of Udaipur sight seeing. When you visit Saas bahu temple at Nagda you must also go to most famous Shiva Temple of Eklingji. It is said Delhi emperor Iltutmish destroyed Nagda.