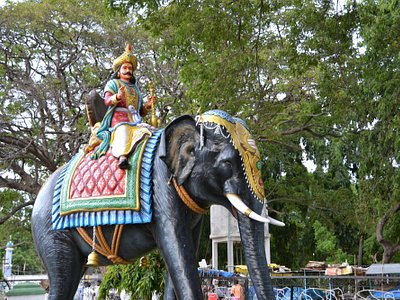 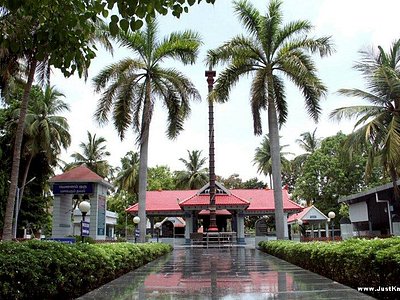 Tiruchirappalli now called Trichy is situated on the banks of the Cauvery river. Trichy, the fourth largest city in the state was a citadel of the early Cholas which later fell to the Pallavas. But the Pallavas never really managed to retain control of this strategic city and lost it to the Pandyas several times. The struggle for power between the Pallavas and Pandyas continued till 10th centuryas the Cholas asserted and assumed the reigns until the deadline of the century.

When this empire collapsed in 1565, Trichy came to be under the rule of the Nayaks of Madurai, the Marathas, the Nawabs of Carnatic, the French and finally the British. But it was under the Nayaks of Madurai that Trichy prospered in its own right and grew to be the city that it is today. The city is a fine blend of the traditions and modern and is built around the Rock Fort. Apart from the fort there are several churches, colleges and missions dating back to the 1760s. With excellent infrastructure facilities Trichy is a good base to see east-central TamilNadu.

Trichy's most famous landmark is an 83m high rock which is the only outcrop in the otherwise flat land of the city. The most amazing fact about the rock is that it is one of the oldest in the world-approximately 3,800 years, which makes it as old as the rocks of Greenland and older than the Himalayas. Atop of the rock is the Ucchi Pillayar Koil,a temple dedicated to Lord Vinayaka, from where one can enjoy a panoramic view of Trichy. A flight of steps leads to the Mathrubutheswarar or Thayumanaswami temple dedicated to Lord Siva where the lingam is a projection of the rock itself.

By Air : The Nearest Airport is Tiruchirappalli Airport

By Road : You can easily get regular buses to Tiruchirappalli from other major cities of the country.

Rock Fort Temple : Rock Fort, the view from the fort is spectacular. The Vinayaka temple at the top is reached by climbing a tunnel in rock. Half way up is the Sri Thayumanaswamy Temple, dedicated to Lord Siva. It has a 100-pillar hall and a Vimana covered with gold. On the southern face of the rock are several beautifully carved rock-cut cave temples of the Pallava period.

Tiruvanaikkaval:(7 kms.)  : The temple here has a Siva lingam almost submerged in water, which flows from a subterranean spring in the sanctum sanctorum. The Lord's name Jambukeswarar is derived from a legend that an elephant once worshipped Him under the holy Jambu tree.

Srirangam : The most important pilgrim center in the district is located in an island just 5kms from Trichy. Srirangam, surrounded by the waters of the Cauvery on one side and its tributary Kollidam on the other, is a 600 acre island-town enclosed within the seven walls of the gigantic Sri Ranganatha Temple.There are not less than 22 gopurams, one of which is the tallest in India. The 72m high 13-tiered Rajagopuram was built in 1987 and dominates the landscape for miles around, while the remaining 21 gopurams were built between the 14th and 17th centuries.

Tiruvanaikkaval or Jambukeswara Temple : Situated 2kms east of Srirangam, this beautiful Siva temple steals the show from the larger Ranganathaswami temple due to its excellent architectural design. The temple is named after the elephant which is believed to have worshipped Lord Siva here. Installed under an ancient Jambu tree, the lingam is partially submerged by water and meant to represent God incarnate as Water.

Gangaikondancholapuram(100kms) : The Brahadeeswarar temple at Gangaikondancholapuram was conceived and constructed by the Chola King Rajendra -I after his victory over the kingdoms in the region of the river Ganges. Apart from the huge Nandi, there are some beautiful sculptures including a dancing Ganesa, a lion-headed well and a stunning piece depicting Rajendra being crowned by Siva and Parvati.