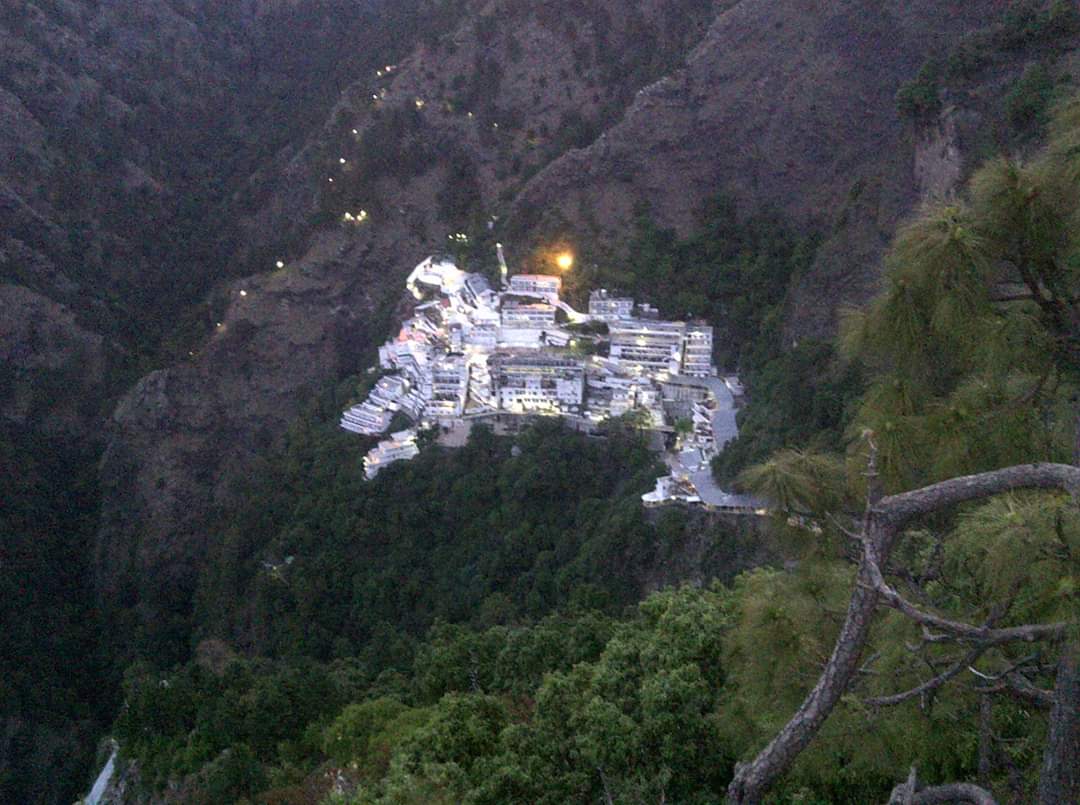 Katra: 50 kms from Jammu. This small town serves as the base camp for visiting the famous shrine of Vaishnodeviji in the Trikuta Hills. The shrine is approachable on foot along a 12 kms. Long well laid foot-path. Every year, nearly 4 million pilgrims pass through Katra on their way to Vaishnodeviji. Accomodation is available in Tourist Bungalows, Yatrika and a number of private hotels, beside

The holy cave shrine of Vaishno-Devi is situated in a beautiful recess of the Trikuta Mountains forming a part of the lower Himalayas as in the state of Jammu and Kashmir. There are images of three deities viz, the Mahakali, Maha-Lakshmi and Maha-Saraswati.

The journey to the Holy Shrine of Shri Mata Vaishno Devi Ji starts with the Call of Mata. It is not only a belief but also a strong experience of one and all that the Divine Mother sends a call to her children. And once a person receives it, wherever he is, is bound to visit the Mother to receive Her unbounded love and blessings. A popular slogan in the local folklore beautifully expresses it- Maan Aap Bulandi - which means that The Mother Herself Calls! It is also a matter of experience by almost all those who visit the Holy Shrine that upon the Call of Mata, a person needs to just take one step and leave the rest to Her and his journey gets completed with Her divine blessings. Simultaneously, it is also believed that unless there is a call or Bulawa no one can visit the Shrine or have Her blessings, howsoever high or mighty one may be.

By Air : The Nearest Airport is Jammu from 45kms

Charan Paduka : The place where the imprints of Mata's pious feet are believed to be imprinted on a rock slab.

Darshan Dwar : The entry gate to the track is around 1 km from the bus stand at a point known as Darshani Deodhi (meaning entrance) or Darshani Darwaza.

Ban Ganga : After the Police Check Post and Yatra Parchi Check Post, the pilgrims reach a small bridge under which flows Banganga, the legendary river

Bhairo Mandir : The Bhairon Temple remained ignored prior to take over of the holy Shrine by Shri Mata Vaishno Devi Shrine Board in the year 1986.

Trikuta Parvat : It is situated 10 km away from Deoghar on the way to Dumka. There are three main peaks on the hill which is why it is called Trikutachal.

Geeta Mandir : After Banganga, the devotees come across towards beautiful temple Shree Geeta Bhawan which is extremely beautiful and worth watching.