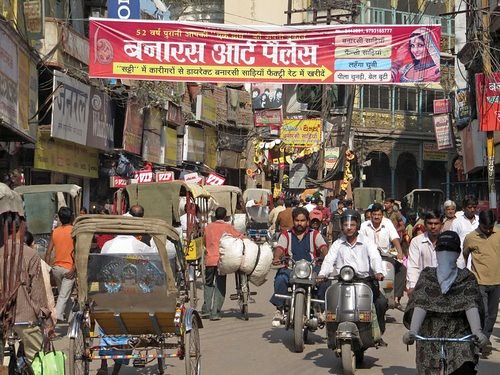 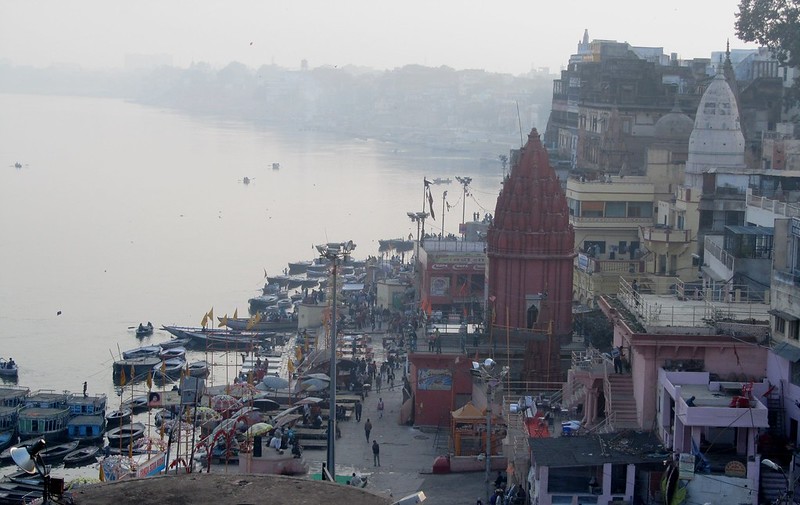 Destination Details
Tour in and around Varanasi
Hotels in Varanasi

Varanasi (also known as Banaras) is one of the oldest living Varanasi Ghatscities in the world and the ultimate pilgrimage for Hindus, who believe that to die in the city, is to attain instant salvation. Situated on the banks of the Ganga, Varanasi is the tract of Holy Land lying between the rivers Varuna and Assi. which flow into Ganga. Varanasi is also known as Kashi, the city of light, since of the twelve "Jyotirlinga" is installed here. Mark Twain, the American writer who visited the city, wrote: "Benaras is older than history, older than tradition, even older than legend and looks twiwpe89.gif (6742 bytes)ce as old as all of them put together". Varanasi has been a great cultural centre, especially in the fields of music, learning and the craft of silk weaving. Some of the most renowned exponents of music have drawn their inspiration from Varanasi. Banaras brocades are treasured textiles and considered collector' items.

The eminent novelist Prem Chand belonged to this city and so did Tulsi Das, the famous poet who wrote Ram Charit Manas also lived here for many years. Ravi Shankar, the internationally renowned Sitar maestro is another of Varanasi's illustrious sons.

By Road : Sarnath, 10- km from Varanasi, is well connected by road to other destinations of the state.

By Air: The nearest airport is Babatpur : 30 Km.22 km from Varanasi and 30 Km from Sarnath. Direct flights for Varanasi are available from Delhi, Agra, Khajurao, Calcutta, Mumbai, Lucknow and Bhuvaneshwar and Kathmandu ( Nepal).

By Rail: There are passenger trains plying daily between Sarnath.

River Front (Ghats) : The spectacular 4 Km sweep of the Ghats is a unique sight, best viewed at dawn, in that "soft first light" when the river and Ghats haGhatsve a timeless appeal. Life in almost panoramic detail unfolds here from dawn to dusk as a steady stream of devotees swelling to thousands on auspicious days-perform rituals by the Ganga. The Ghats are best approached by Dashashwamedha Ghat, where boats are available on hire.

The Kashi Vishwanath Temple : Also knownKashi Vishwanath Temple as Golden Temple, it is dedicated to Lord Shiva, the presiding deity of the city. Varanasi is said to be the point at which the first jyotirlinga, the fiery pillar of light by which Shiva manifested his supremacy over other Gods, broke through the earth's crust and flared towards the heavens. More than the Ghats and even the Ganga, the Shivalinga installed in the temple remains the devotional focus of Varansi. It is open only to Hindus.

Durga Temple : Commonly called the 'Monkey temple', it was built in teh 18th century. Although it is one of the best-known temples, it is open only to Hindus. Beware of the monkeys here who are daring and menacing.

Tulsi Manas Temple : Constructed by a family of Varansi, this modern temple is dedicated to Lord Rama. It is situated at the place where Tulsidas, the great medieval seer, lived and wrote the epic "Shri Ramcharitmanas", which narrates the life of Lord Rama, the hero of the Ramayana. Verses from Tulsidas's epic are inscribed on the walls.

New Vishwanath Temple : Situated in the premises of Banaras Hindu University, a modern place of worship planned by Pandit Malviya and built in the Birlas. Open to all, irrespective of caste or creed.

Alamgir Mosque : An amalgamation of Hindu-Muslim religious sentiments, this mosque is also known as " Beni Madhav ka Darera". Curiously, the entire lower portion of the mosque is retained as a Hindu temple.

Ram Nagar Fort and Museum : A 17th-centuryRam Nagar Fort fort, Ram Nagar is the home of the Maharaja of Banaras, who is revered as the representative of Shiva in the city. The museum's collection includes interesting vintage silver and brocade palanquins, howdahs, a replica of the royal bed and an armory of swords and guns. Ramnagar is also very famous for its Ram Lila.

Sarnath :  Sarnath10 Km/6 mile from Varanasi is the site where Lord Buddha preached his first sermon "Maha-       Dharma-Chakra Pravartan" after his enlightenment. Sarnath is one of the richest in Buddhist antiquities ranging in     date from the times of Ashoka. The great Dhamekh Stupa and several other structures stand testimony to the      importance the place enjoyed at that time

Chunar : 40 Km/25 mile . Chunar has an immense fort overlooking the Ganga. This place has been the scene of battles since 1540, when Sher Shah took it from Humayun. Akbar recaptured it in 1575. In the mid-18th century it was appropriated by Awadh and subsequently, the British. The fort has a sun-dial and a huge well, and affords a splendid view of the Ganga.

Chandraprabha Wildlife Sanctuary : 70 Km/ 44 mile from Varanasi are the forests of Chandra