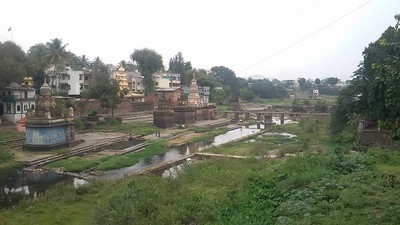 A popular temple town with ancient mythological links, Wai is also a favourite tourist destination because of its scenic ambience and the fact that it can be a stop-over on the way to the hill-stations of Panchgani and Mahabaleshwar. With its more than 100 temples, it is rightly known as the ‘Dakshin Kashi’ of Maharashtra. And if that’s not all, it is also the place where some of the biggest Bollywood blockbusters have been shot.

Located 35kms North of the city of Satara, Wai is truly a pilgrim town with its 100 temples, most of which are constructed in the Hemadpanthi style of architecture that uses huge stone slabs without mortar. These are decorated with stucco, lime-made sculptures, and paintings. The most famous of all the temples at Wai is the Dholya Ganapati Temple or Maha Ganpati Temple on the bank of the river Krishna on Ganapati Aali Ghat. Famous for its design and grandeur, it was built in 1762 by Ganpatrao Bhikaji Raste. The Ganesh idol here is considered ‘jagrut’ just as the Siddhivinayak in Mumbai.

Wai was known as Viraatnagari since it is believed that the Pandavas stayed with King Viraat of Wai when they were in exile. It was an important centre for business and commerce with traders heading toward Satara and Kolhapur or the port of Konkan. At Dhom Dam, the temples of Dhomeshwar and Narasimha witness a huge flow of pilgrims, especially on auspicious occasions.

Wai is located between the six forts of Pandavgad, Kindergad, Kamalgad, Varaitgad, and the twin forts Cahndan-Vandan. These forts are a trekker’s paradise, not yet completely ruined, and offer a panoramic view of the hills and valleys. The bell at Menavli Ghat, which is 3 kilometers away from Wai, weighs 650 kilograms and was captured by Bajirao I’s brother, Chimaji Appa, from a cathedral in the Portuguese fort at Vasai. Dated 1707, it bears a bas-relief of Mary carrying the infant Jesus Christ cast into it. There are two temples at the ghat, one dedicated to Lord Vishnu and the other to Meneshwar or Lord Shiva.

At this ghat, another tourist attraction is the ‘wada’ of Nana Phadnavis. The wada completed in 1780, is six-quadrangled, whose upper floor corridors are lined with teak-wood lattice work. One room of this wada is beautifully decorated with Maratha paintings depicting Lord Ganesha, Shiva and Vishnu and floral motifs made in mineral dyes. The paintings are done on a plain lime wall. History lovers frequent Wai as it is the first place where the 17th century Mughal warlord, Afzal Khan, stopped on his way to Chhatrapati Shivaji’s fort and the town’s main festival is known as ‘Krishnabai Utsav’.

Legend has it that when Afzal Khan set out from Wai to kill Shivaji Maharaj, a local named Shende Shastri prayed to the river Krishna for Shivaji’s victory.  After Chhatrapati Shivaji killed Afzal Khan, the river was thereafter personified as Goddess Krishnabai, thereby leading to the annual festival. This week-long celebration takes place on each of Wai’s seven ghats.

Wai, over the years, has become a hotspot for the shooting of Indian feature films. More than 220 Hindi, Marathi, Bhojpuri, Tamil and Telegu movies have been shot here courtesy its beautiful locations, availability of equipment, the cooperative nature of the locals, etc. Don’t be surprised therefore if conversation with the residents of Wai often veers toward the narrating of anecdotes related to the superstars of Indian cinema.

The nearest airport is at Pune.

The nearest railway station is at Satara, about 40 kms away from Wai which takes around one hour by road to reach Wai.

Take the Mumbai-Pune Express way upto  Pune and then  continue on the NH 4 upto  Surur, take the right turn there, towards Wai- Mahableshwar leaving NH 4. There are State Transport buses as well as private buses plying to Wai or to Mahableshwar via Wai, from all the major cities.

Panchgani is nestled in the middle of five hills in the Sahyadri mountain ranges and amidst five villages known as Dandeghar, Khingar, Godwali, Amral and Taighat. The Krishna River flows nearby which is what has created the lake of Dhom Dam. Located 285 kilometers from Mumbai and 100 kilometers from Pune, it is the pleasant climate of Panchgani that attracts tourists, not to forget the scenic views one gets from its points. Further ahead, Mahabaleshwar is a vast plateau measuring 150 kilometers, bound by valleys on all sides. It reaches a height of 1,439 meters at its highest peak above sea level, known as Wilson or Sunrise Point. Mahabaleshwar comprises three villages: Malcolm Peth, Old ‘Kshetra’ Mahabaleshwar and part of a village called Shindola. The hill station is the source of the river Krishna whose legendary source is a spout from the mouth of a statue of a cow in the ancient temple of Mahadev in Old Mahabaleshwar.

Those who would like to a long boat ride can go for the Tapola lake boat ride. This lake in fact is the back water of the Koyana dam. A boat ride through the clean blue waters and along the lush green foliage is very soothing to the eyes and mind.

You can enjoy the trail to either Pratapgad Fort or Rajpuri Caves. These treks let one experience first hand the natural beauty of the place while breathing in fresh air. Pratapgad Fort was built by Chhatrapati Shivaji in 1656 and is one of the most famous Maratha forts. At Rajpuri Caves, Lord Kartikeya Temple is an important place of pilgrimage.