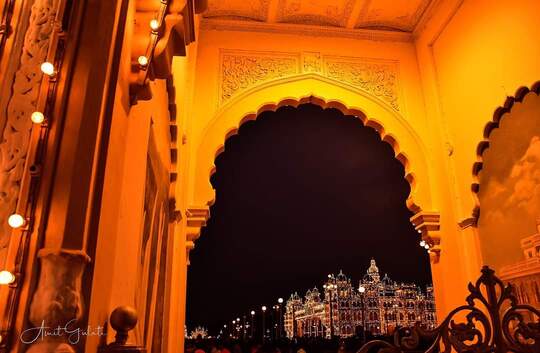 Mysore (or Mysuru), a city in India's southwestern Karnataka state, was the capital of the Kingdom of Mysore from 1399 to 1947. In its center is opulent Mysore Palace, seat of the former ruling Wodeyar dynasty. The palace blends Hindu, Islamic, Gothic and Rajput styles. Mysore is also home to the centuries-old Devaraja Market, filled with spices, silk and sandalwood

It served as the capital city of the Kingdom of Mysore for nearly six centuries from 1399 until 1956. The Kingdom was ruled by the Wadiyar dynasty, with a brief period of interregnum in the late 18th century when Hyder Ali and Tipu Sultan were in power. The Wadiyars were patrons of art and culture. Tipu Sultan and Hyder Ali also contributed significantly to the cultural and economic growth of the city and the state by planting mulberry trees introducing silk in the region and fighting 4 Anglo-Mysore wars against the British. The cultural ambience and achievements of Mysore earned it the sobriquet Cultural Capital of Karnataka.

Meet your guide at hotel lobby in Bangalore at 7.00 am Drive to Mysore  is about 3 and a half hours drive away from Bangalore and there is much to see for the travellers.Visit  on the way stop at  Channapatina is popular for the brightly colored and lacquer coated wooden toys .

Lunch at 1:00 PM. For lunch you can choose the cuisine and restaurant your are interested at your own cost.

After Lunch proceed to  magnificent building of Mysore palace is the residence of Maharajas of Mysore. The guide will take you to Golden Royal Elephant Throne, the Durbar Hall, the Kalyana Mantap and the Gallery inside the palace.

Then proceed to famous Deveraja Spice market which has around more than 800 traders. visiting local shops with guide of spices, fruits and flowers.  At the end of your journey at 5.00 pm , sit back and relax on the drive back to your Hotel in Bangalore reaching by 8.30 pm