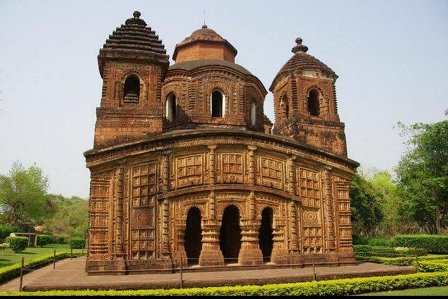 Bishnupur is a town in the Bankura District of West Bengal about 132Km from Kolkata. It is famous for itsterracotta temples andbaluchari sarees. The town has a glorious past that is reflected in its rich architecture, music and handicrafts such as pottery and weaving. It prospered in the 17th and early 18th centuries. Ruled by a line of Hindu Rajas of the Malla dynasty, Bishnupur developed a unique form of architecture and has perhaps the most brilliant and detailed terracotta work in Eastern India that has withstood the ravages of time.

The history of Bishnupur can be traced back to 694 AD, when King Raghunath I founded the Malla dynasty. However it was much later in 994 AD that the place was named Bishnupur. The name is derived from the name of the Hindu God ‘Vishnu'. The majority of the people belong to the ‘Vaishnava' sect.

Pick up from hotel lobby in Kolkata at 07:30 am & drive to Bishnupur 160 kms / 4 ½ - 5 hrs one way On arrival at Bishnupur hot Bengali proceed for  lunch at  Tourist Lodge. on Direct payment Post lunch visit Rash Mancha, Dalmadal Cannon, Jor Bangla Temple, Madan Mohan Temple, Malla King's Fort and Jogesh Chandra Pura Kirti Bhawan Museum.  at Rash Mancha (stage for dancing) you will see One of the famous attraction in Bishnupur which was built by Bir Hambir, a Malla King to celebrate the Ras festival.Dalmadal Cannon - located south of the Rash Mancha. This four meters medieval artillery piece was used successfully against the repeated Maratha attacks in 1742 A.D at Jor Bangla Temple  Built by RaghunathSingha II in 1655 A.D you will see  the temple greatly influenced by classical Bengali architecture. The temple is also known as the Keshta Raya Temple and is famous for its construction and terracotta sculptures. The Temple resembles two hut-like structures with separate angled roofs held together by a chala (tower) at the crown. Followed by Madan Mohan Temple – This temple is one of the largest temples in Bishnupur and consists of a square building and a domed ceiling. Constructed in in 1694 by Durjana Singh Deva in the 'ekaratna' (meaning single tower) style, Madan Mohan Temple has beautiful carvings on the walls featuring scenes from the Puranas, the Ramayana and the Mahabharata.

and then to Malla King's Fort - Very little remains of the fort built between 1657- 1677 A.D by the Malla ruler king Bir singha. The gate of the old fort is of laterite stone and is called "PatharDurwaza" the kings soldiers would hide inside the gate and there were holes drilled in different directions for the ques. A stone chariot in laterite can be seen as cribbed to. and to Jogesh Chandra Pura Kirti Bhawan Museum

At the end of your journey at 6.30pm sit back and relax on the drive back to your hotel in Kolkata reaching by 10,00 pm.