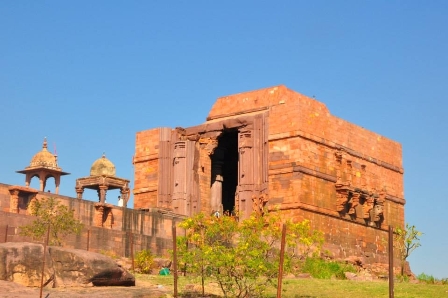 Spend the day exploring Ujjain and Indore, the largest city in Madhya Pradesh. You will visit popular sights such as the Mahakaleshwar Temple,  The Vedha Shala (Observatory), and  Kaal Bhairav Temple Harsidhi Temple. Learn about the rich cultural and historical importance of these sights as your tour guide shares their knowledge with you throughout your excursion

Pick up from hotel lobby in the Bhopal region at 9am. You will then drive to the Harsiddhi Temple (or) MahaKali Temple which are sacred spots of Ujjain. Seated between the idols of Mahalaxmi and Mahasaraswati, is the idol of Annapurna, painted in a dark vermilion color. The Sri Yantra, the symbol of power or shakti, is also enshrined in the temple. The temple was reconstructed during the Maratha period and the two pillars adorned with lamps are special features of Maratha art. These lamps, lit during Navaratri, present a glorious spectacle. There is an ancient well on the premises, and an artistic pillar adorns the top of it.

You will see Ujjaini Mahakaleswar Mahakala of Ujjain is known among the twelve celebrated Jyotirlingas in India. The glory of Mahakaleshwar temple has been vividly described in various puranas. Starting with Kalidasa, many sanskrit poets have eulogised this temple in emotive terms.

For lunch you can choose the cuisine and restaurant your are interested at your own expense. Lunch will take place around 1:30pm, after which you will proceed to further sightseeing in Kal Bhairava. Worship of Kal Bhairava is believed to have been a part of the Kapalika and Aghora sects. Ujjain was a prominent centre of these two sects

The Vedha Shala (Observatory): Ujjain enjoyed a position of considerable importance in the field of astronomy. Great works of astronomy such as the Surya Siddhanta and the Panch Siddhanta were written in Ujjain. The observatory was built by Raja Jai Singh (1686-1743), who was a great scholar. He translated the works of Ptolemy and Euclid into Sanskrit from Arabic. Of the many observatories built by him at Jaipur, Delhi, Varanasi, Mathura, and U jjain, the one at Ujjain are still in use actively.