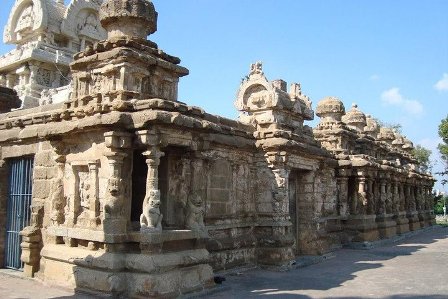 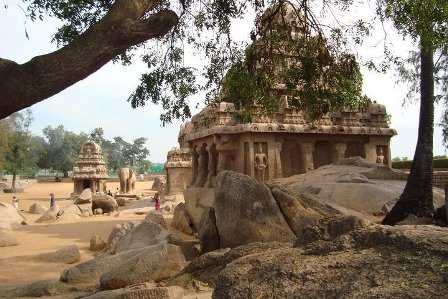 Kanchipuram, also known as Kanchi, is a city in the Indian state of Tamil Nadu located 72 km from Chennai and Mahabalipuram, also known as Mamallapuram, is in Kancheepuram district around 60 km south from the city of Chennai. You will first go to Kanchipuram and visit the Sri Ekambareshwar Temple, Kailsanatha Temples and witness silk weaving. Later travel to Mahabalipuram and visit Five Rathas, Arjuna Dhabas, Krishna Mandap, Krishna Butterball and Shore Temple.

Meet your guide at your hotel lobby in Chennai at 08:00 AM and proceed to Kanchipuram. In Hindu theology, Kanchipuram is one of the seven Indian cities to reach final attainment.

In Kanchipuram, you will see Varadharaja Perumal Temple, Ekambareswarar Temple, Kamakshi Amman Temple, and Kumarakottam Temple, which are some of major Hindu temples in the state. The city is a holy pilgrimage site for both Saivites and Vaishnavites. Of the 108 holy temples of the Hindu god Vishnu, 14 are located in Kanchipuram. The city is well known for its hand woven silk sarees and most of the city's workforce is involved in the weaving industry.

After sightseeing at 12:30 PM, you can get some restaurant recommendation from your guide for lunch at your own cost. After lunch at 1:00 PM proceed to Mahablipuram, an ancient historic town and was a bustling seaport during the time of Periplus Ancient Indian traders who went to countries of South East Asia sailed from the seaport of Mahabalipuram. You will see group of sanctuaries, which was carved out of rock along the Coromandel coast in the 7th and 8th centuries : rathas (temples in the form of chariots), mandapas (cave sanctuaries), giant open-air reliefs such as the famous 'Descent of the Ganges', and the Shore Temple, with thousands of sculptures to the glory of Shiva. The group of monuments at Mahabalipuram has been classified as a UNESCO World Heritage Site. At the end of your journey at 06:00 pm, sit back and relax on the drive back to your hotel in Chennai by 06:00 PM.