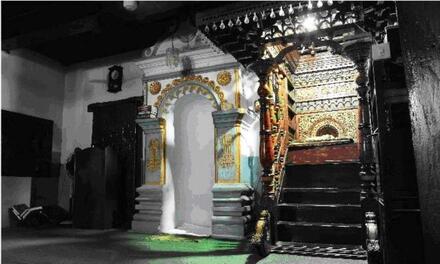 MUZIRIS: Muziris is located around 5 kms form south Kodungallurr & Kodungallur is around 48 kms from Cochin. It is said to have been first occupied around 1,000 BC and continued to be active till the 10th century AD. Muziris was also known in ancient times as Mahodayapuram, Shinkli, cranganore, Muchiri (anglicised to Muziris by Romans and Greeks) and Muyirikkodu. Chennamangalam Jewish Synagogue: The Jewish Synagogue at Chennamangalam, constructed around the 17th century is of a traditional style, with a separate entrance for women. The Department of Archeology had scientifically conserved the Synagogue using traditional materials, which was otherwise in a dilapidated state. A tomb inscription believed to belong to one of the early members of the Synagogue is found in front of it. Paliam Dutch Palace: In the 16th Century A.D., the Paliath Achan, the prime minister of Cochin, ensured the safety of the Raja by escorting him to this palace in Chendamangalam. The Dutch, in honour of the Paliath Achan’s services, renovated his building and presented it to him. He used it as his official residence, where a lot of major decisions were made and put into action. A Paliam History Museum has been proposed in this palace.Paliam Nalukettu: This classical structure was built by the elder member of the family in the year 1786, for the women and minor boys of Paliam. It has a big courtyard at the centre with rooms surrounding it and Purathalam, where the members gathered to chat and for recreational activities. The Nalukettu is a typical self-contained Malayali house, a quadrangle building consisting of four blocks, with a rectangular courtyard in the centre known as the "nadumittam".Paravur Jewish Synagogue: The building is located in the former Jewish Street of the Paravur region. It served as the place of worship for the Jewish community that settled very close to the Paravur Market. The synagogue is attractive there's a pillared entryway that leads from the two rooms at the main entrance to the prayer place .The prayer hall consists of two rooms a rectangular room generally used for meetings and the other main prayer room with the Bimah and the Ark. Gothuruthu and “Chavittunadakam” performing centre: Gothuruthu was cattle grazing land, owned by Paliathachan in those early days. This area is famous for the art form "Chavittunadakam". Portraying Christian history, it is a blend of traditional Portuguese art form brought by Portuguese missionaries to this coastal area and local art forms. The Chavittunadakam performers now perform on Gothuruthu Island, where the Kerala Chavittunadakam Academy has been established.  Gothuruthu Church is at the centre of the village and the priests' office is nearby.  Gothuruthu is also popular for its boat races or Vallamkali, generally performed in September.

Meet your guide at Cruise at 08:00 am & the ship drive for 1hr 45 minutes to Muziris Heritage @ Pattanam  & than visit Chendamangalam or sometimes called Chennamangalam. Chendamangalam is a small town and a panchayat in Paravur Taluk in the state of Kerala. Visit Paliyam Palace at 11:30am, later at 12:00 noon visit Paliam Nalukettu -The main family tharavadu (Naalukettu) is approximately 450 years old. You will see the Kovilakam that houses a large number of artifacts, including ancient documents, religious sacraments, swords, rifles, and gifts brought by foreign dignitaries. Afterwards proceed to visit Paravur Synagogue and the market, the building is located on a former Jewish Street of the Paravur region. It served as the place of worship for the Jewish community and located very close to the Paravur Market, explore the complex of two buildings - the double storied entrance building and the main synagogue separated by an open space. After the sightseeing tour enjoy a delicious lunch at 1:30pm in hotel North Paravur(ON DIRECT PAYMENT)  After the lunch we continue to Gothuruth Church and Chavittunadakam performing center at 2:30pm following a visit to Cherai Beach located in Paravur Taluk. At the end of your journey at 5:00pm, sit back and relax on the drive back to Cruise