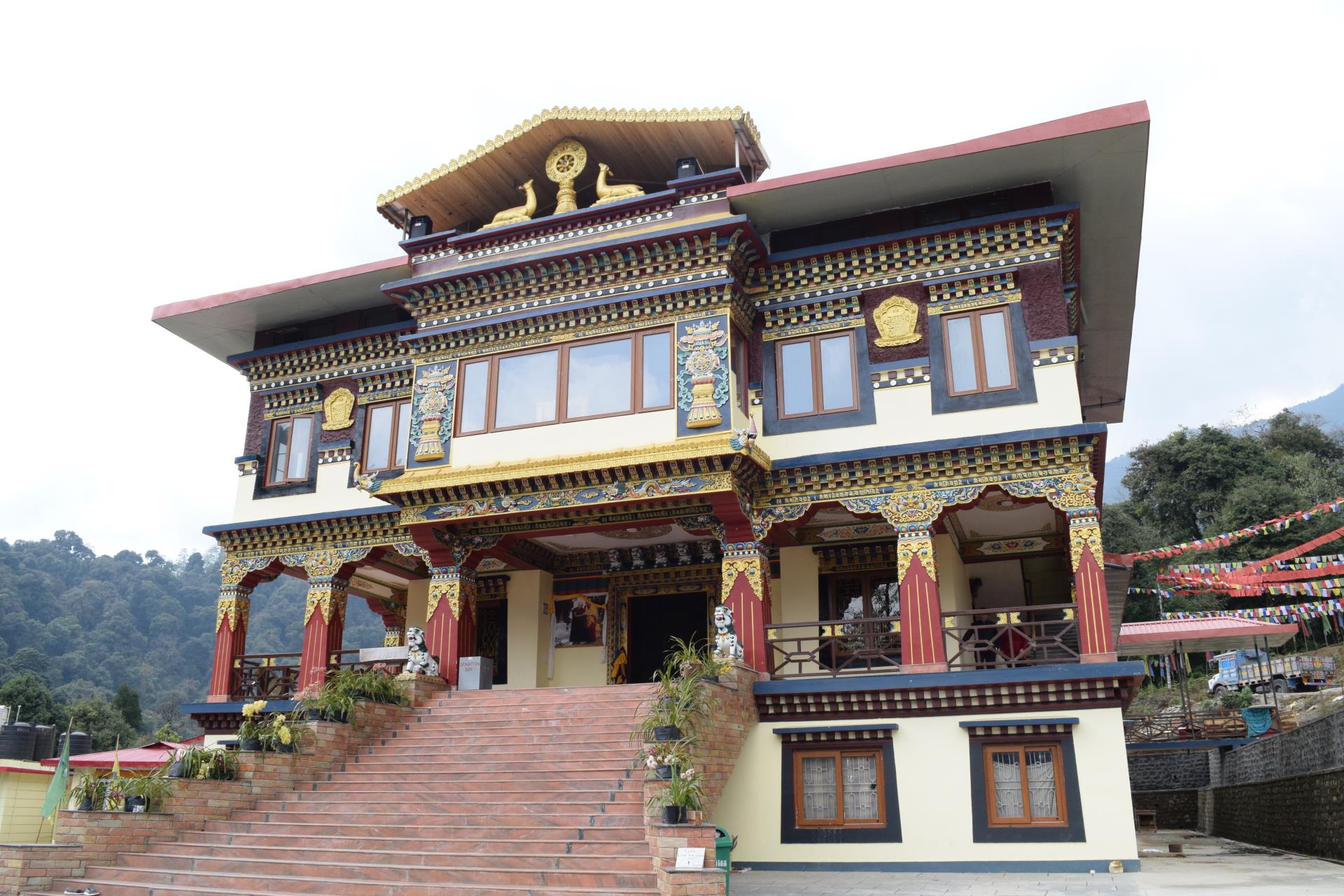 Pemayangtse monastery are exceptionally chosen from physically fit sons from pure Bhutia families. They are entitled to perform the rituals of the Palace and initiate the king’s, enthronement who had strictly observed the novices for years. They have been honored for years as upholders of the scared traditions, prayers and practices, which were imparted and introduced by the early gurus. The style of the prayers, recitations and performing music had been inspired from the Mindoling monastery of Tibet.

Pemayangtse Monastry - About 2kms from Pelling, you can visit the principal monastery belonging to Ngingma sect (one of the four sects of Tibetan Buddhism) which was built in the year 1705 AD. One of the first and few oldest monastery in Sikkim, it was built by Gyalwa Lhatsun Namkha Jigme. The main amongst three monks, who consecrated the first religious king of Sikkim at Yuksam in 1641AD. The monastery being initially small then Lama Jime Pao, the third incarnation of Lhatsun Namkha Jigme upgraded the monastery to a bigger size. There after the renovations, alterations and additions of more and more rooms paintings, sculptures and statues of different deities to the main building was done time to time. It had been the royal chapel and always sustained with proper care, Pemayangtse finally got the modern construction touch with a new form of building materials like steel and cement, since 1950 onwards. The prayers and meditation are traditional of Dzogchen lineage , the sacred school of greater perfection in Vazrayana Buddhism, the only successful propagator on this mountain. There had been Guru Padmasambhawa the great tantric yogi, who lived in the 8th century was later introduced by Lhatsun Namkha Jigme. In this monastery, after they have the texts revealed by him, the treasure text hides of Guru Rempoche. In addition to this, the choreography of the sacred mask dances. Guru Dragmar and Pangtod Chyaam was initially introduced and trained, in this monastery by the third Chogyal Chhyador Namgyal which are well preserved and performed lively. In this monastery main events attract large number of viewers and pilgrims on two different times of the year ( see festival paragraph). To mark the ending of the Guru Dragmar Dance Festival every year, the 150th years old giant Thanka of Sakyamuni Buddha is displayed in front of the monastery, with ceremony to welcome and initiate long life for the devotees. The monks of Pemayangtse monastery are exceptionally chosen from physically fit sons from pure Bhutia families. They are entitled to perform the rituals of the Palace and initiate the king’s, enthronement who had strictly observed the novices for years. They have been honored for years as upholders of the scared traditions, prayers and practices, which were imparted and introduced by the early gurus. The style of the prayers, recitations and performing music had been inspired from the Mindoling monastery of Tibet. The teachings on different practices were frequently imparted to the monks by different lamas in different times. Among many learned lamas that lived at Pemayangtse Monastery, the late Ven Dungzin Rempoche was also an eminent Buddhist monk and artist, who built the great Zangthokpalri, the celestial palace of Guru Rempoche on the top floor of the monastery. Today this masterpiece is the main attraction and loved by the visitors. The brother of Ven Dungzin, the Ven. Khecheo Rempoche had been the Vazra master of this monastery, who was one the greatest learned guru this monastery had. Where as the incarnation of late Khecheo Rempoche the Ven Khecheo Tulku Yangsee is presently receiving teaching and trainings at the Guru H.H. Penor Rempoche’s Monastery (Mysore). At present one of the most eminent gurus from whom the monks of Pemayangtse are receiving teachings from time to time are H.H.. Yangthang Rempoche who was regarded as the incarnation of Terton Dechen Dorjee Lingpa a Lama of present era from Denzong Dzogchen Lineage. Ever since, this monastery was established the enrolment of monks has always been increasing and even till date. Some hundreds years the old social rule was sending at least one son from each Bhutia family to the monastery which practice is still retained .One or Two sons from every family are still proudly sent to the monastery with a festive ceremony called Dichuk.

These days, the child monks receive a proper classroom and teachings by the teachers in the proper monastic school called Laptha. With the progress of their education levels, these days, they are sent to higher level college called Sheda and accordingly Dubda for meditation trainings. Today many children belonging to this monastery are in the big Buddhist learning centers of other states of India, like Namdoling Monastery of H.H. Penor Rempoche (Mysore), Mindoling Monastery of Thichen Rempoche (Mousori) and within Sikkim are Takche Dubda of Ven. Gonjang Rempoche, Fodang Tsuklhagang Dubda and Deorali Sheda. Therefore many young monks have to come back to this monastery,after fully attaining the higher knowledge on the Buddhist philosophy, metaphysics astrology , rituals and meditation. Though the rituals and prayers performances are many in this monastery , the noted root rituals and practices are Rigzin sodup,Drakpo Derzi, Kunchok Chidue, Dorjee Ngingpo, Thujee Chenpo, Dershe Kundu, Gnaysol Pang lhasol, Pangtod Chaam (warrior dance) and Guru Dragmar (mask dance). Besides these usual annual rituals monastery has to perform many prayers on request by the devotees. The monastery has monastic discipline, rules and regulations, they strictly followed by the monks. The administration is headed by the Vazra master, Dorjee Lobon, who is regarded as the principal of monks. The other designation of senior monks are Omzay, Chutheempo, Chingay and Kongay. The lower designations do serving , daily cleaning and offerings. The present Lama is Dorjee Lopon , Chewang Rinzing of Sindrang West Sikkim.

These designated monks are nominated by judging the seniority and eligibility of the monks. The monastery of Pemayangtse though one of the oldest and exceptionally much bigger in size, than other old monasteries in Sikkim. They have one biggest and spacious assembly hall called Dugang' The impressive alter with a Statue of Guru Rempoche in the center among other effigies, the sacred wall paintings and traditional Thankas. This is the main hall where most prayers and rituals are performed. The first floor consists of Kagyur Lhagang, where lavishly shelved are large numbers of old holy text of Kagyur Tengyur. Bum and statue of Sakyamuni Buddha which has a small shrine room called Gonkang, for worshipping an protectorate deities of Pemayantse and Guru Lhagang. In the spacious Prayer Room are the statues of eight different manifestations of Guru Rempoche. It is in this room where Pang Lhasol Naysol the annual worshipping of the Guardian deity.

Khangchendzonga and the consort of Yabdue is done by the offering of different feasts along with the sacred warrior dance, Pangtod Chaam, which falls between August and September . On the top floor is a glass house, enshrining the master piece Zangthogpalri. On the ground floor on both sides in front, there are Dolma Lhagang. The shrine room of Goddess Tara and Dorjee Phagmo Lhagang the shrine of Vajra Veraha, attached to this monastery are two main attractive sites. One is the old traditional residential houses named THASHA where the monks reside and the other way down on the road side, there is a piece of flat ground with a stone throne and a Stupa. This site is Buddhist Yogini from Tibet named Zetsun Mingyur Paldon, where teachings are delivered the novice monks of Pemayangtse.