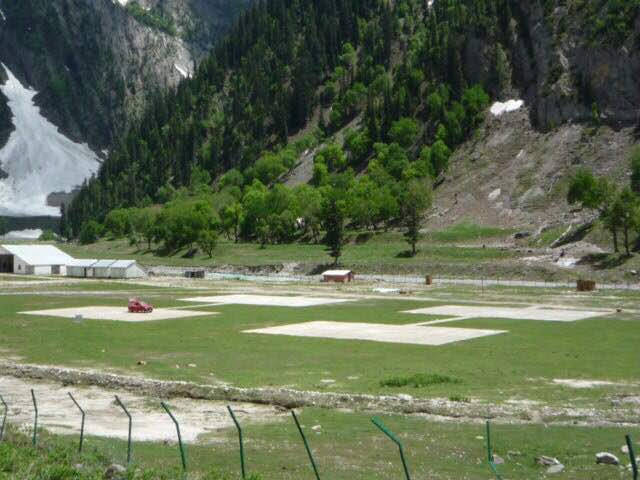 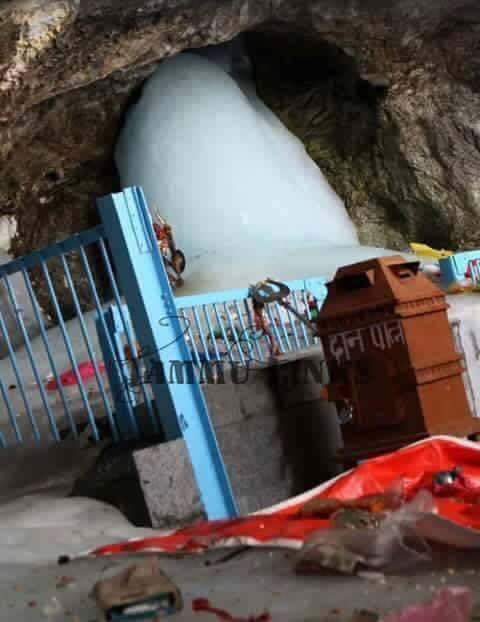 One of the holy trinity, Shiva is a living god. The most sacred and most ancient book of India, the Rig Veda evokes his presence in its hymns. Vedic myths, ritual and even astronomy testify to his existence from the dawn of time. But Shiva, the destroyer, the mendicant, is undefinable: he is the great yogi, the guardian of the absolute. His actions are the themes of the myths in which his nature unfolds.

Legend has it that Shiva recounted to Parvati the secret of creation in a cave in Amarnath. Unknow to them, a pair of mating doves eavesdropped on this conversation and having learned the secret, are reborn again and again, and have made the cave their eternal abode. Many pilgrims report seeing the doves-pair when they trek the ardous route to pay obeisance before the ice-lingam (the phallic symbol of Shiva).

The trek to Amarnath, in the month of Sharavan (July-August) has the devout flock to this incredible shrine, where the image of Shiva, in the form of a lingam, is formed naturally of an ice-stalagmite, and which waxes and wanes with the moon. By its side are, fascinatingly, two more ice-lingams, that of Parvati, and of their son, Ganesha.

According to an ancient tale, there was once a Muslim shepherd named Buta Malik who was given a sack of coal by a Sadhu. Upon reaching home he discovered that the sack, in fact, contained gold. Overjoyed and overcome. Buta Malik rushed back to look for the sadhu and thank him, but on the spot of their meeting discovered a cave, and eventually this became a place of pilgrimage for all believers. To date, a percentage of the donations made by pilgrims are given to the descendants of Malik, and the remaining to the trust which manages the shrine.

Yet another legend has it that when Kashap Reshi drained the Kashmir valley of water (it was believed to have been a vast lake), the cave and the lingam were discovered by Bregish Reshi who was travelling the Himalayas. When people heard of the lingam, Amarnath for them became Shiva’s abode and a centre of pilgrimage.

Situated in a narrow gorge at the farther end of Lidder valley, Amarnath stands at 3,888 m and is 46 Km from Pahalgam and 141 Km from Srinagar. Though the original pilgrimages subscribes that the yatra be undertaken from Srinagar, the more common practise is to begin journey at Chandanwari, and cover the distance to Amarnath and back in five days. Pahalgam is 96 km from Srinagar.

The trek from Chandanwari to Amarnath cave is on an ancient peregrine route. The 30-km distance is covered in two days, with night halts at Sheshnag (Wawjan) and Panchtarni. The distance from Pahalgam to Chandanwari (16 km) now be covered by vehicular transport, and the trail runs along the Lidder river. Pilgrims camp at Pahalgam or Chandanwari on the first night out.

The first day’s trek of 12 km. from Chandanwari is through spectacular, primeval countryside, and the main centre of attraction is Sheshnag, a mountain which derives its name from its seven peaks, resembling the heads of a mythical snake. The journey to Sheshnag follows steep in lines up the right bank of a cascading stream and wild scenery untouched by civilisation. The second night’s camp at Wawjan overlooks the deep blue waters of Sheshnag lake, and glaciers beyond it. There are legends of love and revenge too associated with Sheshnag, and at the camp these are recounted by campfires, to the stillness of a pine-scented, Himalayan night.

By Air : The Nearest Airport is Srinagar Airport 67 kms

By Rail : The Nearest Railway Station is Jammu

By Road : You can easily get regular buses to Amarnath from other major cities of the country.