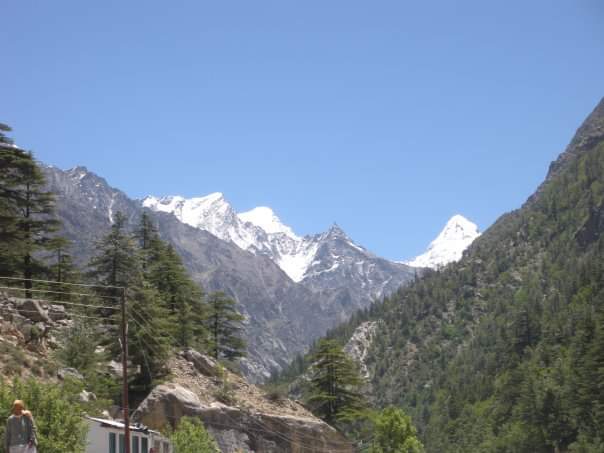 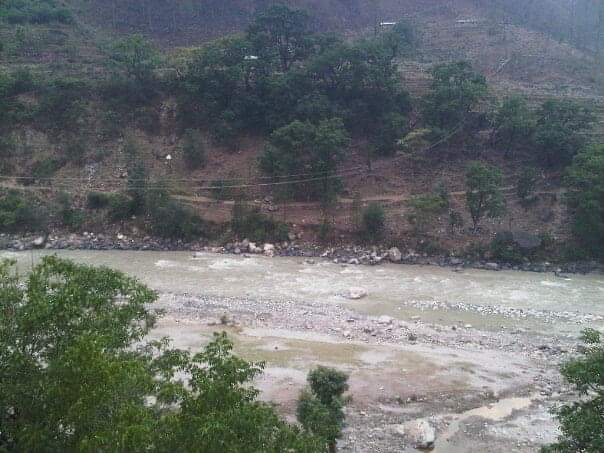 The picturesque pilgrimage in the hinterlands of the Himalayas is the most sacred spot where Ganga , the stream of life, touched earth for the first time.According to mythology, Goddess Ganga - the daughter of heaven, manifested herself in the form of a river to absolve the sins of King Bhagirath’s predecessors, following his severe penance of several centuries. Lord Shiva received into his matted locks to minimise the immense impact of her fall. She came to be called Bhagirathi at her legendary source.

Along the right bank of Bhagirathi stands the shrine of Gangotri dedicated to the Goddess. Perched at a height of 3042 mts., it was constructed in the early 18th century by a Gorkha Commander, Amar Singh Thapa. Every year, lakhs of pilgrims throng the sacred temple between May and October.By November, Gangotri is covered by snow. It is believed that the Goddess retreats to Mukhba, her winter abode ( 12 kms downstream ).

The physical source of the holy river is at Gaumukh, 18 kms. further uphill, along the Gangotri Glacier. Several pilgrims trek upto the source to offer prayers either on foot or on ponies.The verdant valleys, dense forests and towering peaks offer excellent trekking and mountaineering opportunities for adventure enthusiasts. Guidance and assistance can be obtained from - the Nehru Institute of Mountaineering, Uttarkashi or the Tourist Office ( Tel.: 2290) and OSD ( Adventure Tourism ), Uttatkashi or Indian Mountaineering Foundation, Benito Juarez Road, Anand Niketan, New Delh - 110 021 Tel.: 671211.

One of the main religious places among the four Char Dham pilgrimage areas, Gangotri, situated in Uttarkashi, is closely related to Goddess Ganga, the river that we know as Ganges. The history of Gangotri dates back to centuries when Goddess Ganga transformed herself into a river to dissolve the sins of King Bhagirath’s forefathers, following his penance. In order to reduce the impact of her fall, Lord Shiva gathered Ganga into his matted locks and has ever since been associated with Goddess Ganga. Gangotri is a popular pilgrim place in India and tourists should not miss booking Nainital packages when holidaying here.

The Gangotri Temple was built by a Gorkha Commander in the early years of the 18th century. This temple stands at an altitude of 3042m and emits a highly pious aura. Religious rituals are in full swing in the Gangotri temple with the Arti ceremony performed by the pujaris of the Semwal family.The river Ganga originates from the Gangotri glacier and is known as Bhagirathi. The name Ganga picks up later on after the river passes Devaprayag and merges into the river Alaknanda.

Just the perfect destination to breath in a serene and pious atmosphere, Gangotri has the charm to attract people from all over. The striking presence of the snow-clad mountains in the vicinity and the pure crystal clear water of the Ganges flowing around add to the sanctity of the place. One feels close to God in the high altitude of Gangotri. Vegan food dominates the culture and is available in the local food joints or dhabas. Non-vegetarian food and alcoholic drinks are a strict no-no.

Gangotri Temple : Gangotri is the highest temple of Goddess Ganga and one of the four dhams of Uttarakhand state. Gangotri is situated at an altitude of 3,048mts above sea level. Gangotri offers scenic splendors of rugged terrains, gushing water of Bhagirathi River and snow clad peaks. The place holds great importance amongst Hindus. Gangotri remains opened from May and get closed on the day of Diwali festival.

The 18th century’s temple dedicated to Goddess Ganga is located near a sacred stone where Kind Bhagirath worshipped Lord Shiva. Ganga is believed to have touched earth at this spot. According to another legend, Pandavas performed the great ‘Deva Yagna’ here to atone the deaths of their kinsmen in the epic battle of Mahabharata.The temple is an exquisite 20 ft. high structure made of white granite.

Tapovan: You can proceed to Tapovan and Nandanvan after reaching Gaumukh Glacier. Astounding views of Shivling and other major peaks of the Garhwal Himalayas are distinctly visible from Tapovan.

Bhairon Ghati : Near the confluence of Jat Ganga and Bhagirathi River lies a scenic Bhairon Ghati. It is located 10kms from Gangotri. The temple of Bhairav Nath is surrounded by dense forest. Bhairon Temple can be reached after traveling by road from Lanka to Bhaironghati andby crossing the Jahanvi River on foot.

Submerged Shivling : A natural rock Shivling submerged under water is an attractive tourist spot of Gangotri. It can be easily seen when winters are on their way because the water level decreases during this period. According to myths and legends this was the place where Lord Shiva was sitting when he received Ganga in his matted locks.

The natural rock Shivling, submerged in the river, is an amazing sight reinforcing the power of the divine. According to mythology, Lord Shiva sat at this spot to receive the Ganga in his matted locks. The shivling is visible in the early winters when the water level goes down.

Uttarkashi ( 99 kms.)  : An important pilgrimage centre, situated at an elevation of 1,150 mts. above sea level on the bank of river Bhagirathi. Some of the important temples worth visiting are - Vishwanath temple, Ekadash Rudra temple, Gyaneshwar temple and Kuteti Devi Temple. Nearby is the Nehru Institute of Mountaineering. Every year, during the ‘Magh Mela’ ( January 14 ), people visit Uttarkashi to take a holy dip in Bhagirathi along with the image of their village deity.

Kedar Tal ( 18 kms.)  : An enchanting lake, 4425 mts. above sea level against the splendid backdrop of mighty Thalaiyasagar peak. Accessible through a rough mountain trail, it is the base camp for trekking to surrounding peaks. The trek to Kedartal needs a local guide.

Gaumukh ( 18 kms.) : The snout of the Gangotri Glacier and the source of the Bhagirathi river. Pilgrims trek upto the sacred spot on foot or on ponies to take a holy dip in the ice-cold water.

Bhairon Ghati ( 10 kms.) : Situated towards Uttarkashi, it is known for the temple of Bhairav Nath, surrounded by thick forests.

Harsil ( 28 kms. ) : Located in the mountain district of Uttarkashi is the sylvan hamlet ( 2620 mts. above sea level ), known for scenic landscapes and delicious apples. Sat Tal or seven lakes, nearby ( 2 kms.) are a not-to-be-missed attraction.

Gangnani ( 59 kms.) : Noted for its thermal springs, spectacular views and tranquil surroundings. A small upcoming town - Bhatwari, lying 12 kms from Gangnani is worth a visit.

Maneri ( 86 kms.) : The dam across the Bhagirathi and a surrounding lake are worth a visit.

Dayara Bugyal ( 93 kms.) : A breathtakingly beautiful meadow, situated at a height of 3,048 mts. above sea level. A motorable road connects Bhatwari ( 27 kms. from Uttarkashi ) with Raithal village, from where follows a 6 kms. long trek to Dayara. The famous Sheshnag Temple enroute is an attraction of the trek. From Dayara, one can also