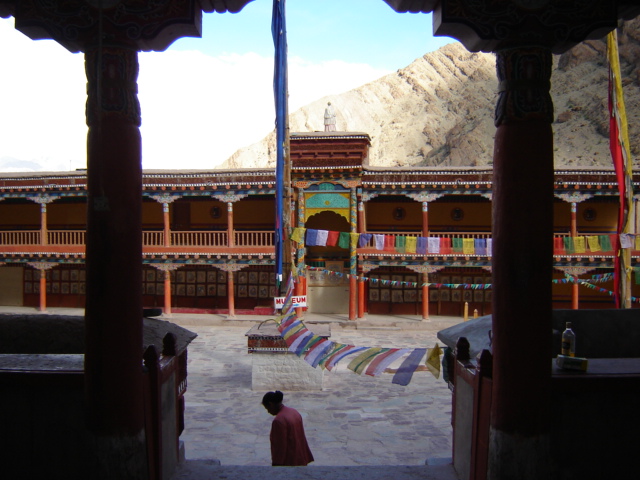 Hemis High Altitude National Park (3350 sq km) is situated in the northernmost district of Ladakh and lies on the west bank of the Indus. Constituted in 1981 as the best potential area for the protection of Snow Leopards in India, Hemis is the country's first national park to be established north of the main Himalayan Range. The high altitude park derives its name from the Hemis Gompa, a famous Buddhist monastery situated 40 km south east of Leh.

The Hemis National Park is located in the Ladakh division of the Indian  state of Jammu & Kashmir. Situated at a distance of around 40 km southeast of Leh, it takes its name from the world famous Buddhist Gompa situated here. The National Park is situated at the bank of river Indus and includes the catchments areas of Markha, Sumdah, and Rumbak streams. The park extends from the latitude 33º38'-34º11' in the North to longitude 77º00'-77º44' in the East.

The terrain surrounding the park is rocky and the thin soil cover supports a poor vegetative growth. Dry alpine pastures are present in sheltered locations and the grass growth is relatively rapid during the summer season after the snow melts from the region

Besides snow leopard, the park is home to a number of exotic animal and bird species. Over 16 mammal and 73 bird species have been recorded in the park. Prominent among the animals found in the park include the Himalayan wolf, red fox, Pallas's cat, wild dog, bharal (Blue Sheep), Ibex, Tibetan argali, Ladakh urial, long-tailed marmot and Himalayan mouse hare.

Hemis Gompa: Situated 49 km south of Leh, the Hemis Gompa is the biggest and one of the most important monasteries in Ladakh. The monastery was built in the 17th century by Chapgon Gyalshas. The monastery has a library and also houses an excellent collection of rare artifacts. In summer, the two-day Hemis Festival is held here to celebrate the birthday of Guru Padmasambhava, the founder of Tibetan Buddhism.

Leh: The center of Tibet-Buddhist culture since ages, Leh is popular for its colorful gompas that have attracted the devout Buddhists and tourists from all over the globe. The main attractions in Leh are the Leh Palace, Shanti Stupa, Victory Tower, Namgyal Tsemo Gompa, Shankar Gompa, and Soma Gompa