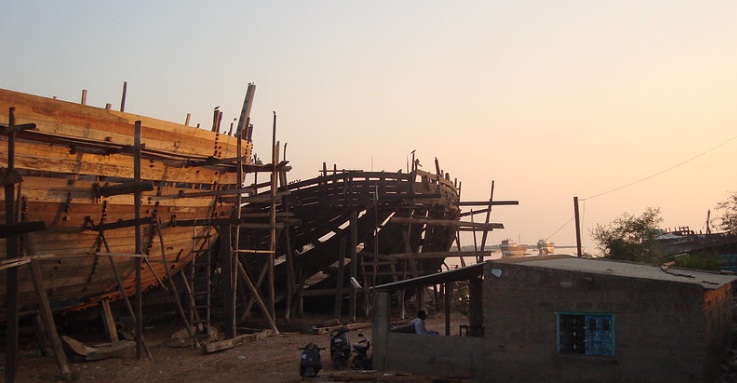 The state's biggest district and its most sparsely populated one is a sandy, barren area over half of which is desert and marshland. Like so many other regions of Gujarat, Kutch has its own distinctive character. It has a remarkably heterogeneous population belonging to 18 different tribes, each with its own language and culture.

The Kutch experience is not based on any single element. You can derive pleasure from even the smallest things such as the clothing and jewellery people wear. The things they make with their own hands for daily use ranging from their clothing to household utensils, their homes and their colourful customs etc.

The Bandhani (tie and dye) hand printed sarees, embroidery and exquisite gold and silver ornaments are some of the traditional crafts of this region. The language dialects of Kutch and their manner of people are highly pleasing and musical to the ear.

A cradle of craftsmanship, Kutch is known for its exquisite variety of weaving, patchwork, block-printing, bandhani, tie-and-dye, rogan-art and other ethnic styles of embroidery, pottery, wood-carving, metal-crafts and shell-work. The variety emerges from the enchanting terrain that provides a perfect backdrop to an extra ordinary fair. Perhaps because the landscape is so white and ochre, even a hint of colour adds a fascinating element to the rustic life of Rann.

With its notable mud architecture, a medley of craft traditions and exquisite apparel, this eminently colorful and culturally rich land has a wonderful handcrafted feel. Each community has its own oral traditions, dance, craft and dress. Stretching along the Tropic of Cancer, from Rajasthan to the edge of Pakistan and the Arabian Sea, Kutch covers a little over 45000 sq km and is geographically one of India's largest and most distinctive districts.

By Air: Nearest airport is Bhuj, situated at a distance of 50 km.

By Rail: Nearest railway station is Bhuj / Gandhidham, situated at a distance of 50km / 95 km.

By Road: State buses available from Bhuj, Ahmedabad and Rajkot

Vijay Vilas Palace - Vijay Vilas Palace is one of the main attractions of Mandvi. It is a splendid monument set amidst sprawling gardens and dotted by a number of marble ountains. The palace was constructed by Rao Pragmalji and designed by a Jaipur architect. Vijay Vilas Palace was built in the year 1920 AD. It contains all the elements of Rajput style of architecture and is a must visit destination.

Dholavira: Known for its large Indus settlement, Dholavira (discovered in 1967) lies in the northwest corner of Khadir, a large island surrounded by the Rann of Kutch.

The first settlers arrived here from the Indus valley more than 5000 years ago. There are several bare Harappan houses and silent cenotaphs, which remain mute spectators to a once glorious past.The most interesting discovery of Dholavira is the large inscription, comprising of ten letters in the Indus script, each letter engraved on slices of crystalline material.

Dholavira is situated about 445 kms. from Ahmedabad, via Mehsana/Radhanpur/Rapar.

Hodka – Cultural Heritage of Kutch -Hodak cultural village is situated in the Kutch District of Gujarat. Hodka is 53 kms. from Bhuj towards Khavada. Hodka is located in the Banni Grassland, right on the edge of the great salt desert – the Rann. The village is a cluster of houses situated close to each other. 7 to 8 families live in a cluster. The village is famous for its craft like Decorative Mirrors, Lamps, Hand Fans, Letter Boxes, Wall Hanging, Lather, Clay, Wood, Metal and Mud work especially the exquisite silver jewellary. The artisans sell their goods directly from their artistic huts which are popularly known as Bhungas.

Aina Mahal -This is a beautiful museum, built in the 18th century as the palace of Maharao Lakhpatji. It has a Hall of Mirrors with white marble walls covered with mirrors and gilded ornaments; the floor is lined with tiles with a platform above it surrounded by a series of fountains. The room also has a chandelier of Venetian glass. It lies in the old part of the city, in a small, fortified courtyard and houses some very rare idols.

Prag Mahal - Constructed in 1979, the Prag Mahal is a magnificent building made of ornate Italian marble and sandstone. Its Corinthian pillars and Jali work depicting European flora and fauna are worth observing.

Cenotaphs Complex - A popular site is the cenotaphs complex at Chattaradi. These are built of red stones. Of all the tombs here the largest and the finest is the one of Rao Lakha built in 1770. It's polygonal in shape with balconies and an intricately carved roof. Other impressive cenotaphs are the ones of Rao Rayadhan, Rao Desai and Rao Pragmal.