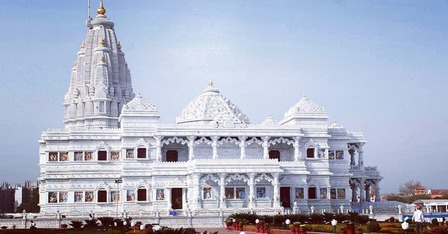 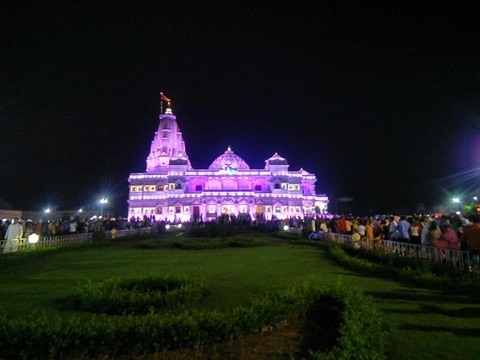 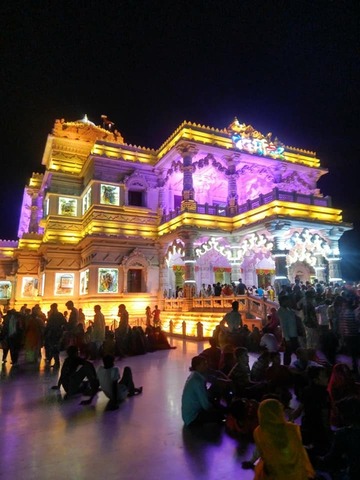 Mathura widely known as birth place of lord Krishna is located on the western bank of river Yamuna at latitude 27degree 41 Minute N and 77Degree and 41 Minuet E. It is 145 Km south-east of Delhi and 58 Km north west of Agra in the State of Uttar Pradesh. For about 3000 Year it was the hub of culture and civilization . Held in sanctity by the Buddhists, Jain and Brahmanical faith alike, it has a long and chequered history. One of the Sapta Mahapuris, it was ruled in turns by the kings of  Solar and Lunar  dynasties and became a center of three Cultures India Indo-Scythian and Hellenstic. For are creation Mathura is the Athens of India. The great school of sculpture known as Mathura school of Art flourished here for 1200 Years. Such proliflic creativety and gushing devotion to novel Art Forms and experi-ment in sculptures and clay figurines as found in this school  are rare in the annals of indian Art History. A survey of this glorious School of Art can be made in the Government Museum, Mathura. The present day Mathura abounds in Place of Religious and Historic Interest, All round the year A large number of Festival and fairs are held in Matura and adjoining areas of Vrindavan Gokul, Brazen and Goverdhan The rascal of Brij is thematically the basis of many performing Arts.

JAMA MASJID : Built by Abo-inNabir-Khan in 1661.A.D. the mosque has 4 lofty minarets, with bright colored plaster mosaic of which a few panels currently exist.

VISHRAM GHAT : The sacred spot where Lord Krishna is believed to have rested after slaying the tyrant Kansa.

DWARKADHEESH TEMPLE : Built in 1814, it is the main temple in the town. During the festive days of Holi, Janmashthami and Diwali, it is decorated on a grandiose scale.

GITA MANDIR : Situated on the city outskirts, the temple carving and painting are a major attraction.

GOVT. MESEUM : Located at Dampier Park, it has one of the finest collection of archaeological interest. Rare items from the Gupta and Kushan period (400 B.C.-1200A.D.) are on display. Major attraction for tourists.

Rail:Mathura is on the main lines of the Central and Western Railways and is connected with all the important cities of the state and country such as Delhi, Agra, Mumbai, Jaipur, Gwalior, Calcutta, Hydrabad, Chennai, Lucknow etc.

Road:Mathura is connected to all the major cities, by National Highways. It is linked by the regular state bus services of Uttar Pradesh, Madhya Pradesh, Rajasthan and Haryana

The Rainy month of Bhadon, the month when the Lord Krishna was born, is a time of colourful celebrations. The famous Braj Parikrama - a pilgrimage of all the places in Braj that associated with Shri Krishna, is undertaken. Traditionally, the Chaurasi kos (84 kos) pilgrimage of Braj Mandal, with its 12 vanas (forests). 24 upvanas (groves), sacred hill Govardhan, divine River Yamuna and numerous holy places along its banks, is undertaken annually by lakhs of devotees from all over the country.

The Yatra extends to Kotban to the north of Mathura, to Nandgaon, Barsana and the Govardhan Hill to the west and South-west of the city and to the a banks of the Yamuna to the east, where the Baldeo Temple is located. Colourful melas and performances of the Raaslila (a depiction of the exploits of Shri Krishna) are distinctive to this festive period.

Gokul - About 15 Kms. of the south-east of Mathura connected by a metalled road is Gokul, a suburb of the inland town of Mahavan on the bank of the river Yamuna. Gukul is a celebrated spot where Lord Krishna was reared in secrecy by his nurse. This place is very scared and is visited by thousand of pilgrims particularly during the birth anniversary of the Lord Krishna in july-august and the time of Annakut festival. Gokul is also associated with the famous saint Vallabhacharya who lived here for many years. The most important temple is that of Gokul Nath Ji. The principal meals are Janma in Bhadon and Annkut on the day after the new Moon of kartik. The "Trinavat Mela" is also held on the fourth day of the dark half of kartik.

Goverdhan - 26 Km from Mathura along the road to Deeg. It is named after the name of the Goverdhan Hillock" which is said to have raised on the finger and was was put in the condition to save the people from the incessant rain which fell constantly for seven days to destroy the people of Brij. The hillock is 7 Miles in length. The temple of Har Deva Ji in Goverdhan town is 400 Yrs old. The Mansi Ganga which is an artificial lake, was constructed my Man Singh of Jaipur. The dense shady trees the hill ranges and tranquil flow of Mansi Ganga all unite together and make a charming view which the visitor can never forget.

KUSM SAROVAR : About two miles from the town, is the boarder of Radha Kund which have significant architectural group erected by T. Sing in honor of his father, Suraj Mal, the cenotaph of Suraj Mal which stand on Kusum Sarovar, present in a fine view.

Jatipura - On the opposite side of Mansi Ganga are two stately cenotaphs built to the memory of the Randhir Singh and Baldeo Singh, Rajas of Bharatpur State. The cenotaphs consist of a lofty and substantial square masonry terrace with corner and lateral alcoves.

5 Kms. to the north of Goverdhan is Radha Kund, A village clustering around two small lake. It is said the Lord Krishna himself bathed here in self-purification. Between Goverdhan and Radhakund is seen the cenotaph of Raja Suraj Mal Bharatpur who was sacrificed in 1763. in front of the cenotaph is an artificial lake with an extensive garden behind.

Barsana - 21 Kms. to the north of Goverdhan is Barsana the birth place of Radha a favourite devotee of Lord Krishna. It is a famous place for pilgrimage with a regular bus service from Mathura to Barsana Via Kosi & Goverdhan.

Barsana originally known as Brahmasaran lies on a slope of ridge. The four prominent peaks of  the hill are regarded as amblematic of the four-faced divinity and are crowned by a group temple is honor of Lali Ji a local title of Radha meaning 'the beloved'

There is second hill in Barsana and the path between these two is known as Sankhi Khue. A fair is held in the month of Bhadon (August-September)

Nandgaon - AT the foot of a hill 51 Kms. north-east of Mathura is situated the venerable village of Nandgaon. It is known as the home sof Lord Krishna's foster father Nand, in whose memory a spacious temple stand on the brow of the hill. Probably built in the middle of the 12'th century by one Rup Singh, It consist of an open nave with choir and sacrarium beyond. Standi