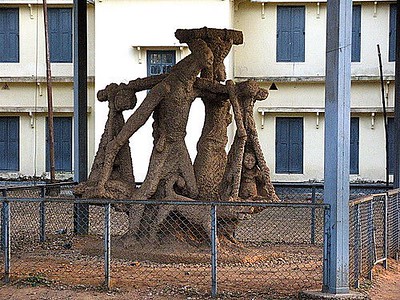 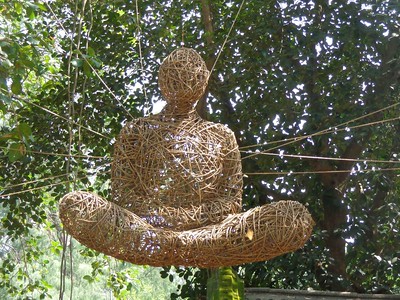 Shantiniketan is a small town near Bolpur in the Birbhum district of West Bengal and about 212 kms north of Kolkata (formerly Calcutta).

It was made famous by Nobel Laureate Rabindranath Tagore, whose vision became what is now a university town – Visva-Bharati University. The place now attracts thousands of visitors each year.

Shantiniketan was earlier called Bhnbandanga (named after Bhuban Dakat, a local dacoit), and was owned by the Tagore family. In 1862, Maharshi Debendranath Tagore, the poet’s father, while on a boat journey to Raipur, came across a landscape with red soil and lush green paddy fields. He decided to plant more saplings and built a small house. He called his home Shantiniketan, the abode of peace. He founded an Ashram here in 1863 and became the initiator of the Brahmo Samaj.

In 1901, Rabindranath started a school at Shatiniketan named Brahmachary Ashram that was modeled on the lines of the ancient gurukul system. After he received the Nobel Prize that enhanced not only the Pride of India but also the prestige of Shantiniketan, the school was expanded into a university. It was renamed Visva Bharati, which Tagore defined as “where the world makes a home in a nest.”

The Shantiniketan campus is adorned by splendid sculptures, frescoes, murals, and paintings of Rabindranath, Nandalal Bose, Ramkinkar, Binodbehari Mukhopadhyay, and others.

Birbhum District, where the Shantiniketan is located, is also famous for its fairs and festivals like Poush Mela (December), Joydev Mela (January), Basanta Utsav (Holi) in March and the famous mystic Baul Singers.

By Air : The Nearest Airport is Kolkata Airport 165 kms

By Rail : The Nearest Railway Station is Bolpur

By Road : You can easily get regular buses to Shantiniketan from other major cities of the country

he Uttarayana complex where the poet lived consists of several buildings such as Udayana, Konark, Shyamali, Punascha, and Udichi, which reflect the architectural genius of the poet’s illustrious son – the late Rathindranath Tagore.

In addition, there are Kala Bhavan, Sangeet Bhavan, Patha Bhavan, Bichitra, Cheena Bhavan, and Hindi Bhavan. You can also see Chhatimtala and the Prayer Hall.

Close to Shantiniketan there are several tourist destinations such as Fullora (40 kms), Nalhati (104 kms), Sainthia, Kankalitala (7 kms), Bakreshwar (58 kms), Massanjore (78 kms), and Tarapith (80 kms). The first five are Shaktipithas where the different body-parts of Goddess Sati is said to have fallen.