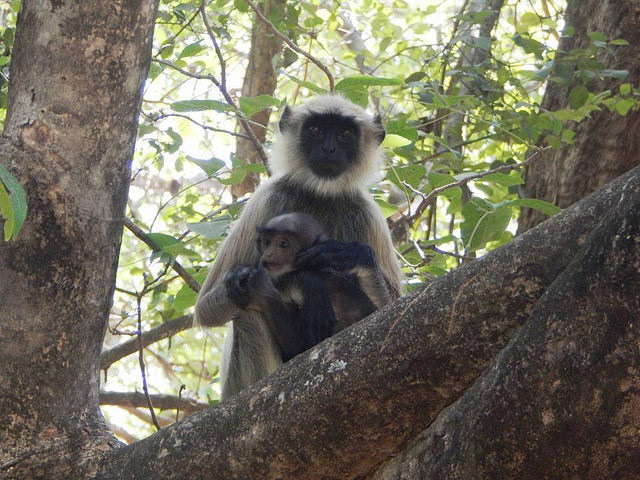 In Gir you touch the history of India before humanity itself. Before monuments, temples, mosques and palaces. Or rather, a history as humanity was emerging, when humans coexisted with lions, before the former had overrun the continent (and the world) and pushed the latter to the brink of extinction.

Many come to Gir because, outside of Africa, it is the only place with wild lions. But to truly experience Gir and the lions, you must explore their natural habitat, with everything from tiny wild birds, not easily seen, but heard singing in the forest canopy, to crocodiles floating in the marsh waters.

Driving around, you are uncommonly aware you are in someone else's territory. You stay in your vehicle because you are in the home of lions, leopards, hyenas, crocodiles; you remember that humans do not rule the world, and however "advanced" we think we are, most of us would not survive very long on our own in a place like Gir.

That is not to say that all humans are out of place. The local Maldhari community has lived here for generations and coexists magnifcently with the wilderness. They sustain themselves by grazing their livestock and harvesting what they need from the forest. The sizeable portion of their herds lost to lions and other predators is considered prasad, offered in exchange for living in another's homeland.

How many of us are aware, let alone as concientious as the Maldharis about the impact of our lifestyle on other species? How can we be, if we so distance ourselves from the habitats that are ravaged to feed our material appetites? When you visit Gir, try to see the Maldharis not with nostalgia for a picturesque past, but as crucial teachers for a better present and future. You don't have to be a shepherd living with wild lions to learn from their way of life.  Ask yourself why we have reached the point where National Parks like Gir are neccessary; what happened to these lions who used to inhabit everywhere from Greece to Bangladesh. If you begin to understand the deeper implications of these questions, you will return home, whether home is a hut in the countryside, or a high-rise apartment, whether in Mumbai or Berlin, charged with new inspiration for evolution in your own life.

Gir is a place that deserves time and involvement. Your chances of spotting wildlife in a few hours is small, especially in the middle of the day; to truly experience the wonders of the Gir forest, and hopefully see a wide variety of its diverse wildlife, three or four days is recommended, particularly with a knowledgeable guide. This will vastly improve the depth of your visit. Contact the Park for information about hiring a guide (phone number below.)

While Gir is most famous for its lions, the park is one of the most diverse places in Gujarat, both in flora and fauna.

Sprawling in an area of 1424 sq. kms., Gir with its dry deciduous forest is a luxuriantly rich ecosystem-endowed with floral and faunal plentitude. Thirty species of mammals, twenty species of reptiles, several species of insects and birds are found here. The forest is the only place in the world, outside Africa, where the lion can be seen in its natural habitat. Gir, the last refuge of the king of the jungle, is one of the largest and most important wildlife sanctuaries in India.

The number of lions in Gir had dwindled to a mere 15 by the turn of the century, due to extensive trophy hunting. In the early 1900s the Nawab of Junagadh was advised by Lord Curzon to protect the remaining lions. The lion was declared a protected animal, although concerted conservation efforts started much later.

By road: A permit for entering the park is obtained at the Sinh Sadan Orientation Centre, Visit Gujarat Forest Department Website for timing. A 35-40 km driving route through the park is maintained for visitors. (IMPORTANT NOTE: Unless traveling with an official and experienced guide, you must not leave your vehicle at any time, for your own safety as well as the well-being of the park and its inhabitants.)  Entry fees, per vehicle with up to 6 occupants, are, for Indians- Rs. 400/- Mon.-Fri., Rs. 500/- Sat.-Sun., and Rs. 600/- for holidays.  Entry for foreigners US$40 (must be paid in rupees.) For more information, contact the Forest Dept. at Sasan Gir, Tel: 02877 285541. Gir National Park is 60 km from Junagadh, the most common base for making a visit, and 360 km from Ahmedabad.  The main centre is at Sasan Gir, and has a forest guest house maintained by the park, just opposite the railway station.

By rail : One can travel by rail to Junagadh from Ahmedabad or Rajkot and then take a 65 km road trip on bus or taxi to Sasan Gir.

Most of the area is rugged hills, with high ridges and densely forested valleys, wide grassland plateaus, and isolated hilltops. Around half of the forested area of the park is teak forest, with other trees such as khair, dhavdo, timru, amla, and many others. The other half is non-teak forest, with samai, simal, khakhro and asundro jambu, umro, amli, vad and kalam; mostly broadleaf and evergreen trees. The river Hiran is the only one to flow year-round; the rest are seasonal. There are also areas of the park with open scrub and savannah-type grassland.

This variety of vegetation provides for a huge array of animals. The most-sighted animal in the park, the chital, or Indian spotted deer, inhabits the dry and mixed deciduous forest, with a population of over 32,000. The more reclusive sambar, the largest of the Indian deer species, weighing 300-500 kg, lives in the wetter western part of the park. Both the sambar and the chausingha, the world's only 4-horned antelope (chau= four, singha= horns), are very dependent on water, and rarely found far from a water source.  Another one-of-a-kind is the chinkara, the only gazelle in the world with horns in both males and females.  The fastest of the Indian antelopes, the blackbuck, also lives in Gir, but has a relatively small population here compared to Velavadar National Park (near Bhavnagar), as it prefers open grasslands to forests.

Along with the famous lions, who number around 350, the park is also home to four other wild cats. There are around 300 leopards, though they are nocturnal and thus harder to spot. Of the three smaller wildcats, the jungle cat is the most widespread, and lives in deciduous scrub and riverine areas. The mysterious desert cat is almost never seen. The rusty spotted cat, previously thought to only live in the Dangs of southeast Gujarat, has only recently been found in Gir.

Other animals and reptiles

The top and middle canopies of the dry, mixed and riverine decidous forests are home to troops of hanuman langur monkeys. The striped hyena is usually seen scavenging alone in the grasslands and scrub forest,  far more solitary than the African hyena. Wild boars rooting into the ground for tuber provide aeration of the soil. If you look closer, you may see smaller mammals like pangolins, pale hedgehogs, Indian hares, or grey musk shrews. The ratel or honey badger is renowned for its snake-killing exploits, earning it the “most fearless animal” title in the Guinness Book of World Records. Another snake-killer in Gir is the ruddy mongoose; the snakes they contend with include the common krait, russell’s viper, and the saw-scaled viper. The Kamaleshwar reservoir now houses the largest population of marsh crocodiles in the country. Other reptiles include the soft-shelled turtle, star tortoise, Indian rock python and monitor lizard (which grows to over 1.5 m long; don’t look for the lizards that live in your yard.)

Gir is also home to more kinds of birds than any other park in Gujarat, yet somehow is not known for its birdlife.  While it may not have the half-million flamingoes found in Kutch during breeding season, Gir is home to over 300 species of birds, many of which can be seen year-round, from the Malabar whistling thrush to the Paradise flycatcher, from the crested serpent eagle to the king vulture, from pelicans to painted storks. The noted ornithologist Dr. Salim Ali said that if there were no lions here, Gir would be well-known as one of the best bird sanctuaries in western India.

Until the early 19th century, Asiatic lions roamed an immense area of South and Southwest Asia, as far east as Greece and as far west as modern Bangladesh.  As humanity has lived in this region for millennia, people coexisted with lions for thousands of years, but in the last few centuries, the growth of the human population has come at the cost of the lions’ habitat.  Like the Bengal Tiger and the Asiatic Cheetah, lions saw a dramatic decline in population as their preferred habitat of grasslands and semi-forested areas became overrun with humans.  Beyond just habitat reduction, though, once guns arrived and became widespread, from 1800-1860, nearly all the lions remaining outside Gujarat were hunted and killed.  The last Asiatic lions in India outside of Gir forest were killed in 1886 at Rewah, and the last wild lion sighted the world outside Gir was in Iran in 1941.