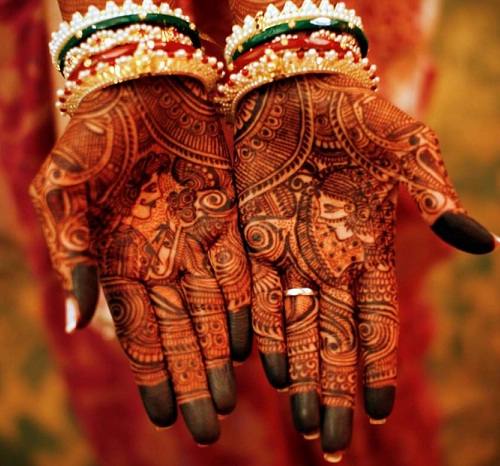 The art of Mehndi:The wedding season is on! Indian weddings are noisy colorful family get-togethers, which wouldn't be complete without certain things - the religious ceremonies, the feast for the guests, and of course, the beautiful mehndi designs adorning the hands and feet of the bride and her friends. Read about mehndi, the ancient Indian body art that's reinvented itself as a modern fashion accessory.

Mehndi:It's safe and painless since it does not require the skin to be pierced. It's completely natural and non-toxic. It's fun, exotic, beautiful, and as simple or complicated as you want it to be. It can last for a couple of days or as long as a month. It's a 5000 year old tradition and a modern craze. It was used by our grandmothers and their grandmothers and their grandmothers ... but our daughters and granddaughters also think it's "cool". It goes by the name of mehndi, and it's the ancient Indian art of adorning the hands and feet with intricate designs and patterns, using a paste made from the finely ground leaves of the henna plant.

The term refers to the powder and paste, the design on the skin, as well as the party or ceremony. It originated in Egypt and in Middle Eastern countries during ancient times and it slowly spread to India and other hot climates like Malaysia, Persia, Syria, Morocco, Sudan and North Africa.

How it works:The leaves, flowers, and twigs of the henna plant are ground into a fine powder, then mixed with hot water. This paste is traced in a design on the desired body part in much the same way as lettering is traced on a cake with an icing cone. A solution of lemon juice and sugar is applied to the drying mehndi to "set it" and bring out its lustrous texture. The dried paste is scraped off, leaving behind a reddish-brown stain or temporary tattoo. The color and longevity of this tattoo will depend on how long you leave the paste on the skin (the longer you leave the paste on the darker the stain). For best results (the tattoo lasts for as long as three weeks), let the mehndi dry for 7 to 10 hours. Different shades can be obtained by mixing in various things like indigo, tea, coffee, cloves, tamarind, lemon, sugar, and various oils. For convenience, mehndi is readily available as packs or cones, and design stencils are also obtainable off the shelf.

An ancient wedding tradition:From times immemorial, Indian women have used mehndi in celebrations of betrothals, weddings, festivals and other occasions. A bride whose family has little money wears her mehndi in place of ornate gold jewellery. A bride is not expected to perform any housework until her wedding mehndi has faded. A mehndi party is held at the home of the bride the night before the wedding and only women from the bride's side get to attend. The evening is spent applying mehndi designs to the bride's hands and feet (and anywhere else)!

Indian mehndi designs use reddish-brown mehndi and fine lines, lacy or floral patterns as opposed to the large, floral patterns of Arabic designs, and large, bold geometrically-patterned black henna angles of African mehndi art. They often incorporate the peacock (India's national bird), the lotus flower (India's national flower), and an elephant with a raised trunk (a symbol of good luck).

A unisex craze:In recent times, mehndi has enjoyed both a revival and a renewal. Actress Demi Moore was among the first celebrities to be seen wearing mehndi. Madonna created quite a stir at the MTV awards function, when she turned up with mehndi all over her body. The adoption of mehndi magic by Western models, musicians, and movie stars (including Naomi Campbell and Drew Barrymore) has led to mehndi tattoos becoming a white-hot fashion trend. Now it is not just hands and feet that are adorned, but also the arms, neck, back and navel. The magic is no longer confined to just women - men sport mehndi tattoos too. The traditional reddish-brown color has been enhanced by a variety of shades (contrasts of black, red and maroon) and glitters (highlights of gold, silver or copper). Best of all, no longer is mehndi reserved for occasions like weddings - it's worn to a Valentine's Day bash, a formal party or even an evening at the disco!