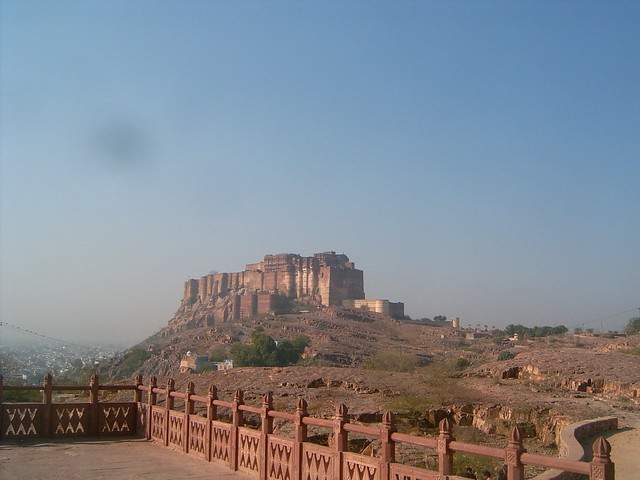 Jodhpur : This bustling desert city is the second largest in Rajasthan after Jaipur. It was founded by Rao Jodha, the leader of the Rathore clan, in 1459 AD. The mammoth, imposing fortress (Meherangarh) has a landscape dominating a rocky ridge with the eight gates leading out of fortress. The new city is outside the structure.

Pick up from hotel lobby in Jodhpur at 09.00 am and leave to Mehrangarh Fort, located in Jodhpur, Rajasthan, is one of the largest forts in India. Built around 1460 by Rao Jodha, the fort is situated 410 feet above the city and is enclosed by imposing thick walls.You will also see in Visit the Chokhelao garden which sits at the foot of the Mehrangarh Fort. This over two hundred year old garden has recently been restored, complete with the scents, sounds and textures of a garden of eighteenth century Marwar.

The garden today, as in the past, is truly a celebration of nature as it captures the changing colors of the seasons in the upper terrace of flower beds. It is equally magical for night viewing when the Mehtab Bagh or moonlight garden laid out in the lower terrace comes alive with the white flowers of chandni (Tabernaemontana coronaria) and the sweet smelling kamini (Maurya exotia). While paintings capture the activities in the garden in the form of music and dance performances in pavilions and terraces within the garden, romantic interludes in the shade of trees of the orchard area, holding durbans on platform under colourful awnings, the garden today houses a restaurant in the upper

most terrace, which enjoys the spectacular view of the garden and the ramparts of the city of Jodhpur beyond. Visit this gem of a garden and carry back the sensuous experience of eighteenth century Rajput garden.

You will see The Jaswant Thada is a cenotaph located in Jodhpur, in the Indian state of Rajasthan. It was built by Maharaja Sardar Singh of Jodhpur State in 1899 in memory of his father, Maharaja Jaswant Singh II, and serves as the burial ground for the rulers of Marwar.

Around 12:30 pm, you will have a break for lunch (OWN EXPENSE). After lunch, around 1 pm you will see Mandore is an ancient town, and was the seat of the Mandorva branch of the Gurjar -Pratihara dynasty which ruled the region in the 6th century AD by King Nahar Rao Panwar.[1] In 1395 AD, a Mohil princess of the Parihar rulers of Mandore married Chundaji, scion of the Rathore clan of Kshstriyas.

You will see  Umaid Bhawan Palace can qualify for several firsts: the largest private residence in the world, the finest extant example of art-deco, the only palace to have painting from the Ramayana painted by a Polish artist, the first to use air-conditioning, electricity and elevators, and the most impressive for its size and dimensions.

Government Museum, Mandore: About 8 kms form Jodhpur; Mandore was the capital of Marwar. This enchanting place having beautifully carved cenotaphs, halls of heroes, palaces and old fort, is of immense historical importance.

You will see Clock tower It was built by Maharaja Sardar Singh (1880-1911) from whom the market takes it name. In fact, the tower dominates the entire scenario. It's a 70 mm cinemascope with unknown and faceless humans in the lead roles for many tourists, most of whom are filming it live.

At the end of your journey at 5.00 pm , sit back and relax on the drive back to your Hotel in Jodhpur