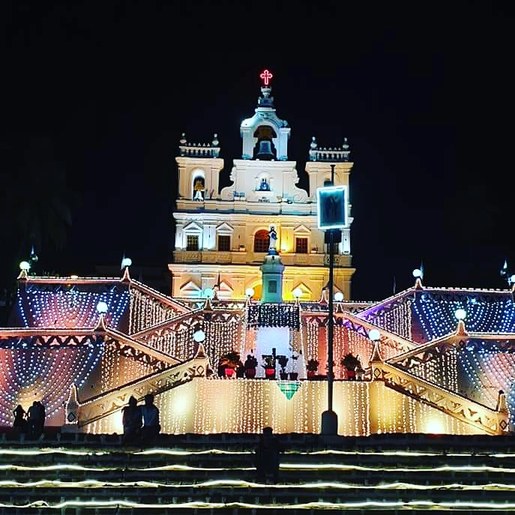 Full Day Trip Goa with Lunch at Spice Plantation Take a private tour of Goa, a state in western India with coastlines stretching along the Arabian Sea. Its long history as a Portuguese colony prior to 1961 is evident in its preserved 16th-century churches and the area’s tropical spice plantations. Goa is also known for its beaches, ranging from popular stretches at Baga and Palolem to laid-back fishing villages such as Agonda. In the tour, cover Old Goa Churches, Mangueshi Temple, Spice Plantation, Portuguese Latin Quarters, Shanta Durga Temple, Miramar Beach, Dona Paula with lunch at Spice Plantation

Day 1Meet your guide at your hotel lobby in Goa at 9am. Head to Old Goa Churches - Old Goa or Velha Goa (Velha means "old" in Portuguese) is a historical city in North Goa district in the Indian state of Goa. You will see a UNESCO World Heritage Site. Visit Mangueshi Temple, one of the largest and most frequently visited temples in Goa. In the year 1560, when the Portuguese started Christian conversions in Salcete Taluka. See the Mangesh Linga from the original site at the Kushasthali or Cortalim on the banks of river Aghanashini (Zuari) to its present location at Mangeshi.

Visit the Shanta Durga Temple, a large temple complex at the foothill of Kavalem village in Ponda Taluka, Goa, India. A small laterite mud shrine was built and the deity was installed here. Next, you will head to a Spice Plantation Tour with lunch included. The Spice plantation is located in Ponda, a village untouched by pollution. It is spread over large tract of verdant land, which offers the perfect setting for you to soak in a pure unadulterated nature. Get welcomed in a traditional way by offering Aarti, Kumkum and a garland of flowers with lunch and herbal tea. Healthy and nutritious food will be served in a traditional manner on a banana leaf feast on authentic Goan cuisines. Help yourself to generous servings of veg and non veg delicacies as well as some Italian delights to your plate. High on nutrition and steeped in tradition, the food will be just the way you’d expect in this lap of nature.

After lunch, visit the Portuguese Latin Quarters - Fontainhas (or Bairro das Fontainhas, in Portuguese), an old Latin Quarter in the city of Panaji in Goa, India. It maintains to this day its Portuguese influence, namely at the architectonic level, such as narrow streets, old villas and buildings painted in lively colors. The quarter shows how Panaji was during the Portuguese rule of Goa.You will see Dona Paula, a former village and tourist destination in the suburbs of Panaji, Goa, India. Today it is home to the National Institute of Oceanography. Dona Paula was a woman of charity and was known to have helped the villagers, worked a lot for their betterment and so after her death, the villagers decided to rename the village as Dona Paula, previously called Oddavell.

Panjim City is the capital of the Indian state of Goa and the headquarters of North Goa district. It lies on the banks of the Mandovi River and means “land that never floods”. The Baroque Our Lady of the Immaculate Conception Church is located overlooking the main square known as Praça da Igreja. Colorful villas, Kala Academy, cobbled streets and interesting buildings give Panaji a Portuguese ambiance. At 5pm, sit back and relax on the drive back to your Hotel

Keeping you safe during COVID-19