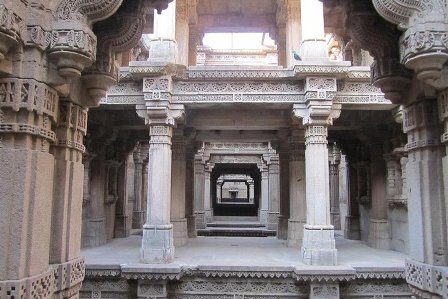 Modhera : 99 kms from Ahmedabad, the 11th century Sun temple of Modhera is easily one of the finest examples of devotional in western India. Built by the Solanki Rajput kings, the aid of donations from the people, the temple features carved torana arches mounted on kirti stambhas (pillars of victory) as the entrances, a large rectangular stepped with 108 smaller shrines, an exquisite 52 pillared portico, beautiful domed central portion and a sanctum sanctoruim designed so that the sun light fell on the bejewelled statue of the God, specially at sunrise during the equinox. The exterior of temple is carved with traditional erotic scenes, rivalling at Konark and Khajurao, and depictions of various Gods and, while inside are friezes of the Mahabharata and portrayed on the pillars. The temple is framed by a well garden, and sits on the banks of river Pushpawati. There is a cafeteria here run by the Tourism corporation of India tea, and a PWD Guest House.

Patan : nother fine example of the Solanki period architecture can be seen at Anahilwada Patan, the capital of Gujarat from the 8th century till Ahmed Shah moved his seat of power to the larger and more impressive citadel of Ahmedabad in the 15th century. It saw the The greatest reminder of the golden period of Gujarat under the Solanki kings can be seen at the Rani-ki-Vav stepwell some distance from the town centre. Built in the 1050s and named for Rani Udamati, wife of Maharajah Bhim Deva and daughter-in-law of Mulraja, founder of Solanki rule in Gujarat, the stepwell is the oldest and perhaps the grandest among the 120 plus step wells in Gujarat. It's massive size can best be measured by comparism with the tourists who descend the steps and seen from above look little more than ants swarming an a

Pick up from Hotel lobby in Ahmedabad at 09.00 am and leave to Patan. Patan is an ancient fortified town which was founded in 745 AD by Vanraj Chavda, the most prominent king of the Chavda Kingdom. He named the city Anhilpur Patan or "Anhilwad Patan" after his close friend and Prime Minister Anhil shepherd. Historian Tertius Chandler estimates that Anhilwara was the tenth-largest city in the world in the year 1000 with a population of approximately 100,000. You will visit Rani ki vav, a stepwell in Patan that is an excellent example of subterranean architecture Sahastralinga Talav. The architecture of this tank integrated the great sense of water management and sanctity of water in the Hindu religion. The Khan Sarovar is located just outside the South Gate. Make a stop for lunch where you will get to choose the cuisine and restaurant your are interested at your own expense. After lunch continue on to visit Modhera. There you will see The Sun Temple, a temple dedicated to the Hindu Sun-God, Surya. It is situated on the bank of the river Pushpavati, 25 km from Mehsana and 102 km from Ahmedabad. You will see the main hall and shrine all reached through a complex, pillared pavilion with beautiful columns and magnificent carvings decorating it's hall. At the end of your journey at 4:30pm, sit back and relax on the drive back to your centrally located hotel in Ahmedabad.